There is data to show extreme poverty, malnourishment in India. Why is no one talking about it?

Even as the number of millionaires in India is rising, the picture on the other end of the spectrum is stark.

In the current politico-economic discourse, where there are major discussions on the Rafale deal or on Article 377, there is little noise on extreme poverty and major — if not massive — underemployment and unemployment.

This despite the fact that the Nobel Prize-winning economist Amartya Sen and his collaborator Professor Jean Dreze have looked closely at most data available, with Jean Dreze analysing many states and regions, to put together statistics. 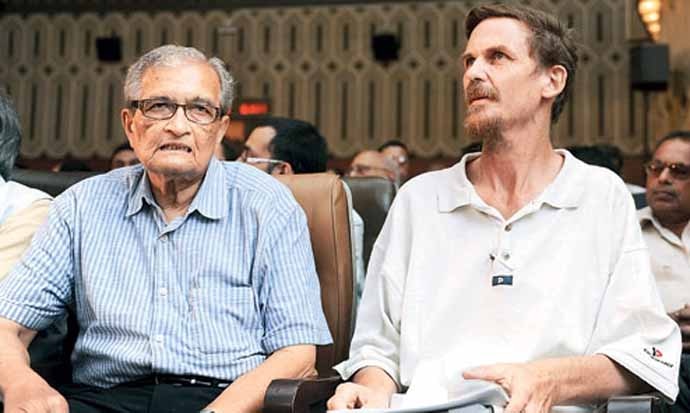 The socio-economic parameters raised by Sen-Dreze look at social services and the betterment of the poor and lower middle strata. (Photo: Twitter)

In recent years, Dreze has been subject to vilification in precisely those underdeveloped areas he had assessed in collaboration with Sen, even being criticised as a “meddling foreigner”.

In their tabulation of India’s rank among six South Asian countries — where the top rank is 1 and the bottom six — in 2011, they found India to be at the 3rd place in terms of GDP per capita; 6th in child immunisation; 6th in proportion of underweight children; 5th in life expectancy; 5th in infant mortality rate and under-5 mortality rate; fourth in female literacy rate (age 15-24) and fifth in access to improved sanitation.

Most students and teachers would be more interested in poverty, capital ratios, Sensex, etc. But the Sen-Dreze Survey shows that highly important economic indices are being ignored by most economists, including students of economics.

If we look at literacy rates in South Asia, India, according to the 2011 census, has a percentage rate of 74. East Asia, including China, Indonesia, Malaysia, Philippines, Thailand and Vietnam, have very high literacy rates, from 96-99 per cent female literacy. How many children or college students get a chance to examine such data?

Child nutrition in India is low. Going by UNICEF (2012) data for children under 5 years, India’s performance is worrisome. The numbers show the percentage of infants with low birthweight. India, with 28%, has the highest score, followed by South Asia=27; Least Developed Countries=16; Sub-Saharan Africa=13; with East Asia & Pacific =6, the lowest. It should, however, be remembered that these wages are often delayed by banks and cooperatives. The Modi government has also ordered that significantly lower wages can be paid, even if there are official (higher) minimum wages available. The Modi government has shown little interest in rural labour. The Congress too has not pushed for the MGNREGA, though Sonia Gandhi played a major role in initiating this policy.

Amartya Sen and Jean Dreze estimated a poverty line based on the estimated population below the international poverty line of PPP (purchasing power parity) at $2/day, 2010 (%), which amounted to 68.7%, more than 2/3rds of the population.

A recent Credit Suisse report has stated about India that “There is still considerable wealth poverty, reflected in the fact the 91 per cent of the adult population has wealth below $10,000 (around ₹735,000).”

Now this huge sum would be the income of the middle and upper middle strata, certainly not anywhere near the official poverty line. On the other hand, “a small fraction of the population (0.6 per cent of adults) has a net worth of over $100,000 (₹73,50,000). However, owing to India’s large population, this translates into 4.8 million people,” the report says. Neither the BJP nor the Congress are paying much attention to MGNREGA. (Photo: PTI/file)

According to the report, personal wealth in India is dominated by property and other real assets, which make up 91% of estimated household assets. Over the 12 months, non-financial assets grew by 4.3 per cent, accounting or all the wealth growth in India.

The Credit Suisse report is a classic neo-liberal understanding, focussed on the creation of wealth. The socio-economic parameters raised by Sen-Dreze are looking at social services and the betterment of the poor and lower middle strata, especially women and children.

The Credit Suisse Report does not take up these issues as their brief is to strengthen bank capital and to maximise wealth creation to benefit millionaires and billionaires.

But the basic question is, which road should India take?

In a poor country, given its weak social statistics and the steady jettisoning of the MGNREGA and other pro-poor measures, the Modi government, which is looking at big capital at home and abroad, is unlikely to even look at the Sen-Dreze study. Nor is the Niti Aayog dedicated to a process of empowering the poor and lower middle strata.

Also read: What India must do to bridge income inequality

#Jean dreze, #Amartya Sen, #Unemployment, #Poverty
The views and opinions expressed in this article are those of the authors and do not necessarily reflect the official policy or position of DailyO.in or the India Today Group. The writers are solely responsible for any claims arising out of the contents of this article.