WHEF is helping Hindu business community to realise its dreams

The World Hindu Economic Forum has grown from strength to strength since 2012.

The World Hindu Economic Forum (WHEF) was launched in 2012 at Hong Kong, in an atmosphere of excitement and anticipation. It was the brainchild of Swami Vigyananand, the mentor of a number of similar organisations sponsored by him, to galvanise growing Hindu communities across the globe.

Unlike others, the Hindu business community did not have an organisation to articulate their aspirations or a forum to help them in their commercial endeavours.

The WHEF was intended to overcome the lacunae, and now, boasts a substantial office in India and a steering committee of distinguished business leaders from across the world.

Its mentor has always insisted the WHEF would definitely be concerned with business and allied activity alone and not matters of faith. Of course, business success was identified as an instrument of self respect and dignity, and appropriate conduct as true citizens of the world. 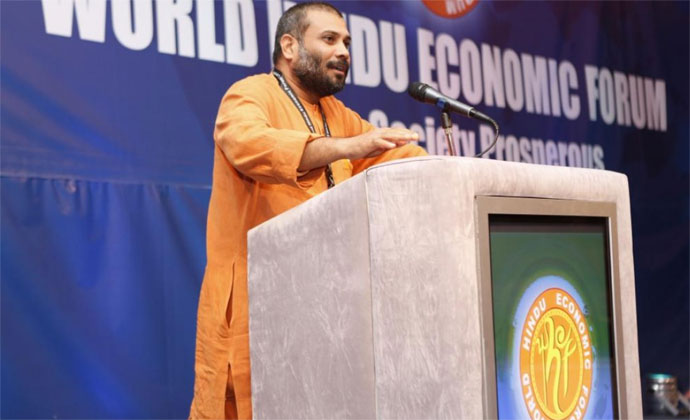 Following the successful launch of its now regular annual conference at Hong Kong in 2012, aided by the generosity of the local Hindu business community, similar conferences have been held in Bangkok (2013) , New Delhi (2014) and London (2015). The next major conference is scheduled for November 18-20, 2016 in Los Angeles.

The most notable aspect of the conferences has been meticulous planning preceding each event and the extraordinarily high quality of discussion in presentations by leading authorities, covering diverse subjects.

Hundreds of business leaders, politicians, academics and entrepreneurs have attended the conferences. They are happy to pay their own way for an occasion that highlights shared purpose and interests, some managing to make business deals while attending the conference itself.

Their underlying sense is that their arrival as a global business force to be reckoned with is being marked, and an opportunity provided to consolidate and progress.

The economic advance of India is one major fulcrum, like China’s since the 1980s, which institutes business opportunities to be identified and the nation’s advance promoted.

The long march of India's economy that faltered long ago, in an earlier era, is being reversed and the WHEF is one footprint of its new identity.

The principal goal of the WHEF is to facilitate access to business opportunities for its members by providing both: a direct inter-personal and web-driven platform for networking.

It includes the identification of specific business opportunities by members for each other, as well as broader economic intelligence.

One aspect of this facilitation is the gradual creation of a database of companies and individuals. The WHEF also brings together potential investors and entrepreneurs, who are seeking to initiate specific projects, acting as a conduit for access to affordable capital.

The ambitious eventual goal, for which preliminary steps in establishing a committee of bankers and others have already been taken, is a banking venture for members. Many of them are SMEs, for whom affordability and thoughtful risk-assessment are hurdles for access to credit.

The WHEF is also keen to evaluate and promote ventures in cutting-edge technology through research and professional guidance. Support and mentoring of young entrepreneurs is already occurring as well, with experienced members ready to offer counsel and contacts to the many fresh aspirants who participate in WHEF conferences.

A spin-off arising from its global membership is the ability of members to offer information on the regulatory environment, with which they are individually already familiar themselves, in a particular location.

One unexpected phenomena of WHEF conferences is the existence of Hindu enterprise in virtually every corner of the globe. It echoes an era when Hindu businesses straddled the world and indeed had a dominating presence in much of Southeast Asia, a position eventually ceded to overseas Chinese business.

A critical factor in the success of the WHEF is the rapid progress of the Indian economy in recent decades. It has created opportunities that established contacts, and cultural affinity put the global WHEF diaspora in an advantageous position to leverage.

There is an inchoate dream that the economic endeavours of the global Hindu community will merge with the success of India itself to establish an unprecedented historic footprint that was once a reality several centuries ago.

The purpose is business success, that is, the unavoidable concomitant of national dignity and a benign embrace of the rest of humanity itself, by establishing a prosperous and equitable global order.

Indeed this was an unspoken aspiration of the divine Swami Vivekananda and immanent in Bharat’s ancient classics.

#Hinduism, #Business
The views and opinions expressed in this article are those of the authors and do not necessarily reflect the official policy or position of DailyO.in or the India Today Group. The writers are solely responsible for any claims arising out of the contents of this article.

Gautam Sen taught international political economy at the London School of Economics and Political Science for more than two decades. He is a member of the Steering Committee of the World Hindu Economic Forum and President of the World Association of Hindu Academicians. He is co-author of ‘Analyzing the Global Political Economy’, Princeton 2009.