The yoga guru has the agility, energy and flexibility young athletes would give an arm and leg for.

Bollywood’s walking and talking version of Red Bull, Mr Ranveer Singh, is all things whacky. While some would call him an insufferable attention seeker, the man seems to have no care for what people say. He dances on the streets, wears weird things and can, for sure, laugh at himself.

Yes sir, Ranveer Singh is the epitome of off-screen entertainment. 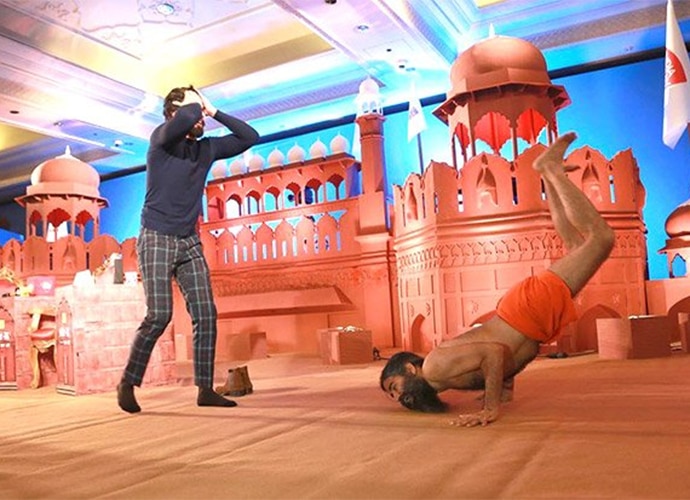 The latest in a long series of antics by the actor is a dance-off with yoga-guru and FMCG entrepreneur Baba Ramdev. Ranveer Singh, at Agenda Aaj Tak 2016, walked up to Baba Ramdev and insisted that he dance with him. What Ranveer Singh was unprepared for was just how fit and energetic the yoga guru was.

Whatever may be the man’s flaws, you have to admit, for a 50-year-old, Ramdev has the fitness, agility, energy and flexibility teenage athletes would kill for.

Even as Ranveer Singh tried his best to outdo the yoga guru, he conceded in the end, as Ramdev managed to make everyone gasp with his dance moves and stamina. Maybe Ranveer Singh should try his hand at snorting the crazy yoga.

If Baba Ramdev ever launches Patanjali Coke, this would be the best advertisement for it. pic.twitter.com/8OOZPNY3gk

Nobody but Ranveer Singh could have done this. A loony dance duet with Baba Ramdev. pic.twitter.com/wfEIEH5rxn

The dance-off between @RanveerOfficial & Baba Ramdev is THE funniest thing you'll see today. Or this week. Or month! https://t.co/Sg8HunKjAH

Ranveer is no match for the Patanjali Supremo https://t.co/xnbwF8TJFt

Ranveer just found his match. LMAO I love it https://t.co/BUZyXfnCCs