Once upon a time in Nidia, there was an emperor who made insane promises

One morning, the palace woke up to loud noises outside its giant gate, just off the well-guarded fortress.

Many, many years ago in a large country called Nidia lived an emperor who ruled over a population of mostly idol-worshipers. The idol they worshipped was that of the monarch himself. He was popular and powerful, with a warm heart and noble intent. He was also surrounded by a shrewd band of counsellors, who exploited an obsession with his huge ego.

The emperor spent his waking hours thinking up utopian ideas and floating dramatic reforms, many of which bombed due to shoddy planning and pea brain origin. Most of his edicts were harsh on the poor but easy on the rich. He made insane promises, and the poor licked up the brimming cup of hyperboles.

They forgot their pain and hunger. They drank the bitter potion of trust and waited, pledging to slog all their life until the golden era would someday arrive.

One morning, the palace woke up to loud noises outside its giant gate, just off the well-guarded fortress. Curious, the emperor walked into the balcony, and was startled to look down at hundreds of thousands of women, young and old, angry and screaming.

“Hope it’s not yet another rape!” he muttered to his top minister before picking up the megaphone. “What can I do for you my dear women?” he spoke. The crowd suddenly fell quiet. It is not every day an emperor called commoners “my dear”.

“Last evening, three young women were attacked by some scoundrels in the middle of a buzzling fair,” yelled an elderly protester. “This is the third attack this week. Neither the guards nor the ministers provide us protection.”

“You have equal rights. It’s already there in our kingdom!” said the law minister, who was with the emperor.

The emperor did not understand. The law said anyone who acted funny with women was put in jail for up to 14 years. What was the fuss about?

Another young woman stepped forward, and bowed before speaking. “We want to be safe, day and night, inside the house or out. We want to be able to walk around without fear as men do.” 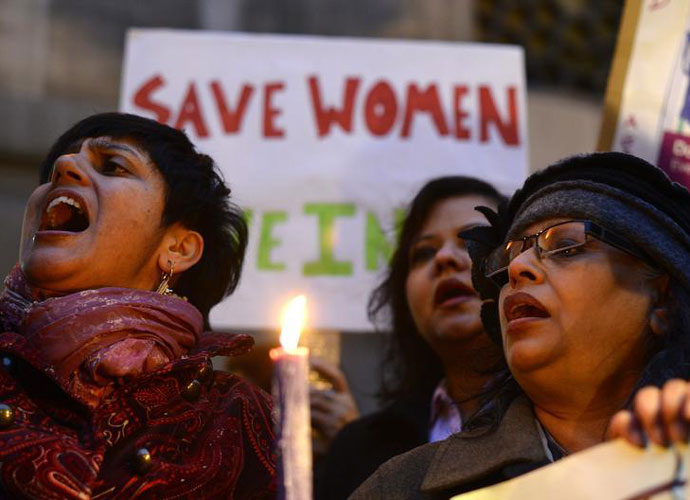 The emperor walked into the balcony, and was startled to look down at hundreds of thousands of women, young and old, angry and screaming. (Photo: Reuters)

The emperor thought a while, and some more, and just when the murmur grew louder, he declared: “I will bring out a radical ruling to uphold your virtue, my dear women.”

There was anticipated silence from the women, while men shuffled nervously. The crowd knew their ruler would come up with something outlandish. He had a history of birthing creepy ideas. Not long ago, he ordered all the huts in his rat-infested empire to be burned down to rein in a deadly plague. Not many rodents would have fled when the fire went up, the officials had assured them.

“I have a brilliant idea,” the emperor said. “Trust me.”

The women looked around and, as their murmurs grew louder than their patience, the ruler proclaimed: “I hereby order everyone in my empire to uncover their body and walk around in the nude, for a year, come summer or winter. Every one, rich or poor, will follow this edict starting now….” Saying this, the emperor stripped himself before the crowd. All palace officials and his personal staff followed.

Men were mostly pleased. Some were left with no cover. Many were also upset, and worried for the safety of their own women.

The emperor knew exactly what he was doing, and decided it was pointless to explain to a whole lot of blockheads who worshipped him anyway.

Just when the women were about to hide, the emperor made a slight add-on to his edict. “Any man caught aroused in public will be castrated.”

“Long live the emperor!” his devotees chanted in unison.

The next day, the cabinet sought an urgent meeting with the emperor. Surely the women are staying indoors, leaving all the work for men to do. He tried to put on a serious pretence.

“Worker shortage?” he asked, almost sure he had guessed it right.

“Let the men work harder for a change,” he said, smiling with pride at his own brilliance.

“Let women take a year-long break. Let them be safe.”

The emperor looked around and laughed, his laughter echoing back to him in the silence of the courtroom.

“On the contrary,” said the law minister, “it is the men who have locked themselves up.”

Also read: Letter of thanks to the disgraceful Abu Azmi

Post your comment
#Castration, #Rape Culture, #Bangalore molestation
The views and opinions expressed in this article are those of the authors and do not necessarily reflect the official policy or position of DailyO.in or the India Today Group. The writers are solely responsible for any claims arising out of the contents of this article.