One year on, how India will remember DeModitisation

November 8, 2016 will go down in the history of modern India as Bad Governance Day.

I concede defeat – the Dear Leader’s vociferous cheerleaders were right. "Modi will create history," they said with conviction, and indeed he just has. November 8, 2016 will go down in the history of modern India as Bad Governance Day.

Alternatively, it can be called DeModitisation Day. Ordinary citizens will have a holiday, while BJP members will have to report to their party headquarters for a seven-day workshop.

Day 1: A 10,000 word essay-writing assignment. The topic: How Not to Make Modimental Blunders.

Refreshments will be served: Crow sandwiches for non-vegetarians, and humble pie for vegetarians.

Day 2: A book launch by any intelligent person who formerly worked for the BJP government. I’m hoping former RBI governor, Raghuram Rajan, would have written his first tell all book by then.

I assume the title will be something along the lines of, Thank God Those Idiots Sacked Me! or, I Told Them Not to Do It!

Refreshments will be served: Same as above for BJP members. Raghuram Rajan will get a thick wedge of gooey chocolate cake instead. "Modi will create history," they said with conviction, and indeed he just has.

Day 3: A workshop will be conducted by a former Union minister who held both the home and finance portfolios. He will probably beseech BJP members not to think of new policies as all the big ones they have introduced as "audacious" and "pathbreaking" have turned out to be colossal blunders.

He will state very clearly that the reason why no other Indian government has thought of schemes like that before is because the schemes are incredibly stupid.

He will try not to smirk as he reminds the audience that the only policies that have worked since the BJP took over were former UPA policies that were renamed on the grounds of numerology and/or megalomania.

Refreshments will be served: Same as above for BJP members. The former Union minister will get idli-sambar instead.

Day 4: A session called Modiplexes, conducted by psychiatrists who specialise in persecution complexes. They will attempt to calm senior BJP members and assure them that the public has no desire at all to kill them, and besides they’re way too busy lining up for cash.

Refreshments will be served: Comfort food for all.

Session 2: "Stop with the Chest-thumping! Do not confuse Guerrilla tactics with Gorilla tactics".

Refreshments will be served: Bananas for all.

Day 6: Documentaries of the urban and rural poor who suffered through the traumatic demonetisation exercise will be screened. Private school teachers will monitor the auditorium with cattle prods to ensure that the BJP members stay awake (we’ve seen them in Parliament, we know!). 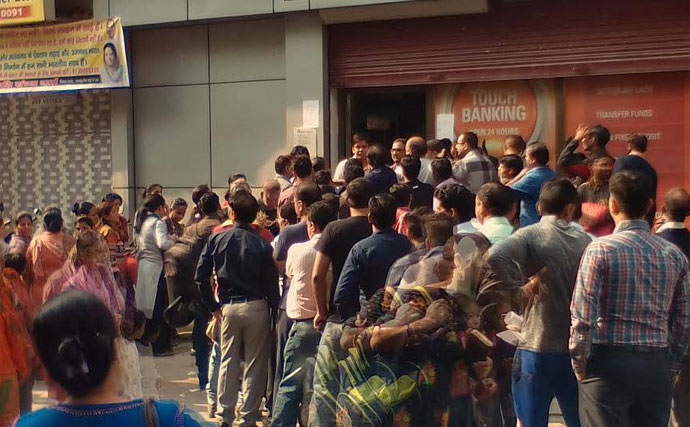 Documentaries of the urban and rural poor who suffered through the traumatic demonetisation exercise will be screened.

Refreshments will not be served.

Day 7: A grand finale on a wildly extravagant Bollywood scale at the Ram Lila grounds in Delhi. BJP members will be joined by 10,000 lucky people. These will include Bollywood celebs like Anupam Kher and Ajay Devgn, certain journalists, certain members of corporate India and heads of big business houses like Baba Ramdev.

They will have a 6am to 6pm yoga session where they will crouch, hold their ears, and practise just one asana: murgasana. This fabulous event will be beamed live across the nation.

Refreshments will be served: Only diuretic liquids.

(Note: Only one Sulabh Shauchalaya will be available. The crowd will have to queue to use it. There will be no special queues for ladies or senior citizens. People are only allowed to use the bathroom once during the entire day. Their right hand finger will be marked with indelible ink.)

Ooh, I just can’t wait for the first anniversary!

Also read: Demonetisation is dehumanising. Why must I pay for the corrupt in my country?