He may be our prime minister, but he's just an ordinary love struck Indian at heart.

Megalomaniac. Bully. Motor mouth.  Dictator. Bigot. These are a few of the words around 69 per cent of India's citizens freely throw around (in whispers, of course) to describe India's prime minister. There was a time when I would have enthusiastically agreed and added a few of my own with the help of Roget's Thesaurus. But I've had a change of heart after US President Barack Obama's recent trip to India. I fear that the Dear Leader has been gravely misunderstood. I feel terribly sorry for him, and there are kinder words I would use for him now:

Achingly lonely: Did you see the way he flung himself into an astonished President Obama's arms and clung to his neck, almost decapitating him in the process, when he received him at the airport? That was the cry of a colicky baby who has been reunited with his darling mommy after a few days. And it wasn't an ordinary bear hug, folks - it was a teddy bear hug. If we want our prime minister to stay calm, we should create cuddly little stuffed replicas of world leaders he can snuggle up to when he tucks himself into bed every night. Remember, a prime minister who sleeps well is less likely to give us sleepless nights. Barack Obama was greeted by a Modi bear hug on his arrival.

Bordering on senile: Oh all right, the whole world is sniggering at the suit he wore - yeah that one with his name woven into the fabric. I have to confess that I gaped like the proverbial village idiot when I saw that too, then cringed and had a sickening Mother-Earth-swallow-India-now moment. Fortunately, my sensitive side kicked in soon after - I remembered how old he was, and how his hair (whatever little is left) is like white cotton candy and I felt ashamed of myself immediately. Look, he was just scared he would forget his own name and needed reminders, okay? How else would he be able to introduce himself as "Myself Narendra Damodardas Modi, and yourself?" If you ask me, I think his name woven into pin stripes was a little more discreet than a tacky reminder note pinned on his jacket. 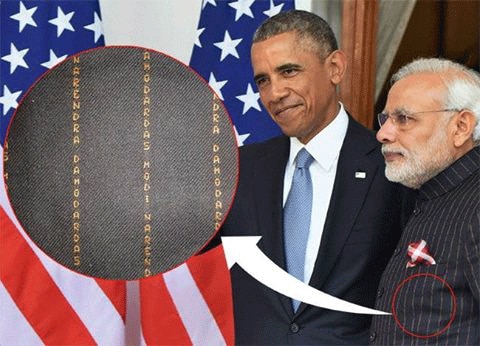 Modi's suit has his name written all over it, lest someone forgets it.

Terribly insecure: For a moment, forget about the loud, clashing colours of the turban he wore for the Republic Day parade. Consider the height instead. Look, he also wants to be seen as one of the world's tallest leaders, and with US President Obama towering over him, the poor chap was desperate to add a few inches. Sure, he could have bought a pair of stilettos but that would make him totter about in an ungainly manner and he probably didn't want people to wrongly assume that he'd been knocking back som ras on the sly. Come on, don't tell me you haven't sometimes wished that you were taller, thinner or prettier than your friends. Never? Cut him some slack, guys! 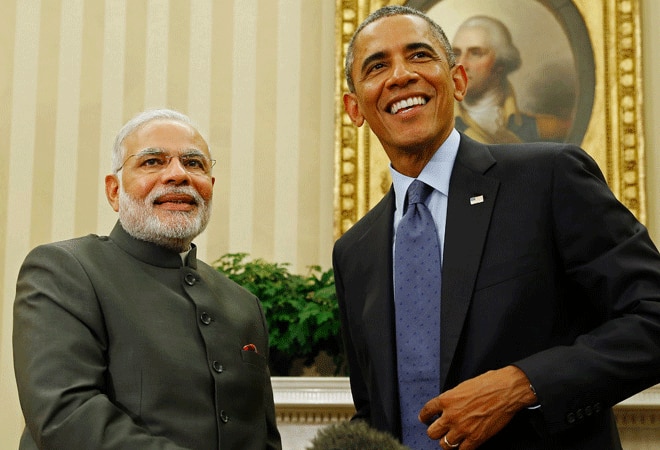 It's awful to get clicked with friends who are much taller than you.

Mildly possessive: So what if he rudely shoved vice president Hamid Ansari out of his chair just so he could sit next to President Obama at the Republic Day parade? Protocol shouldn't come between best friends. Hey, didn't you always want to sit next to your best friend at school, birthday parties, weddings, cinema halls, etc? What's the big deal - hell, it wasn't as if he was stalking President Obama or something creepy. 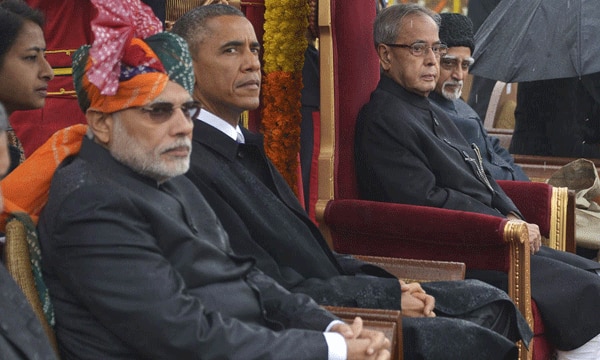 Modi ensured that he was seated right next to the US president.

Incredibly romantic: Such a big hoo hah over the number of times he changed his clothes when US President Obama was here. Like you've never changed your clothes as often in the early days of your relationships when that lovely, tingly feeling was in your tummy, hah! Remember that you did it regardless of the fact that your boyfriend wore the same grungy jeans, Che Guevara tee and stinky socks for weeks. And what have Bollywood movies taught us - haven't you noticed how often the heroine and hero change their clothes in just a single song and dance sequence? So yeah, he may be our prime minister but he's just an ordinary love struck Indian at heart. Hello, at least he didn't dance around trees and embarrass us further - be grateful for small mercies. #Barack Obama, #Narendra Modi, #Obama Visit
The views and opinions expressed in this article are those of the authors and do not necessarily reflect the official policy or position of DailyO.in or the India Today Group. The writers are solely responsible for any claims arising out of the contents of this article.