People in Goa are tired of power cuts and so is the admin of the Goa Electricity Twitter page. Here are what some random tweets out of frustration read.

Many states in India have been experiencing power cuts since the beginning of April (here's why). People in Goa are also dealing with frequent and long power cuts. Many of them are complaining about it on Twitter. People were and still are tagging Goa Electricity Department's official Twitter page to raise their concerns.

Now imagine your colleagues constantly complaining about an issue that is completely out of your hands. You will eventually get annoyed and explode, write?

That’s exactly what happened with the admin of the Goa Electricity Department’s Twitter page.

After listening to all the complaints, the admin expressed that they were also on the same page.

First, the admin expressed concerns over the power cuts and told everyone that they will be away for some time unless the power is restored. Screenshot of Goa Electricity Department's tweet which was deleted later

And of course, this left everyone confused and out of curiosity one user asked, “What?”

The admin went on to described his feelings in a brutaly honest tweet. 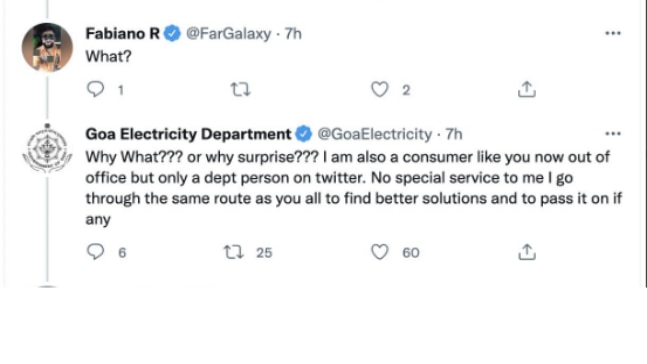 But seems like it was the heat of the moment because the admin deleted the tweets after some time.

Or maybe the boss called a meeting to discuss this. THIS IS NOT THE FIRST TIME

Admin of Delhi Police and Zomato’s Twitter page are quite popular on the social media platform. They are often praised for their witty and relatable content.

Now, the admin of the Goa Electricity Department page has found a fandom on Twitter.

After the incident, we really want to know the face behind Goa Electricity Department Twitter page. The ‘whosoever’ person had shared such replies several times in the past.

for 15 minutes holding hearing the music for registering my one phase issue which was finally registered and attended at 01:30 am transformer hG fuse replacement as we call it and restored. no special line to me although i know every one concerned. We all have to await

in your way. Those were the old days when call centre service was not existing so people used to keep their personal nos for quick resolve based on thier experience etc

The supply was restored at 09.25 pm as reported by AE Pernem. You must have already got the supply right???

I take every thing in a serious way as I want things resolved and I believe that you all our counting on me. Jokes do not work in this matter

If you are also facing issues with power cuts, we hope the Goa Electricity Department admin brought a smile on your face.

#Goa power cuts, #Power cuts tweets, #Power cuts, #Goaelectricity
The views and opinions expressed in this article are those of the authors and do not necessarily reflect the official policy or position of DailyO.in or the India Today Group. The writers are solely responsible for any claims arising out of the contents of this article.