‘How’s the Josh?’ Why Pakistan should thank Varun Dhawan and Vicky Kaushal

After Narendra Modi and Nirmala Sitharaman, it seems BSF jawans are high on 'josh' too. Were the cheers loud enough to be heard on the other side of the border as well?

Varun Dhawan dancing at the Attari Wagah Border on this Republic Day once again proved how committed our Bollywood stars are to two things.

A video of Varun Dhawan dancing, jumping, occasionally showcasing some acrobatic skills with a group of people — all dressed in black T-shirts with 'BSF' written in white with khaki pants — grabbed much attention on social media. The song is a famous one — heard at least twice a year, once on Independence Day, and then again on Republic Day. (Optional on Kite Festival Day).

Many questioned on Twitter why the jawans chose a Hindi song to dance on, etc., etc.

But it was very simple. They were just Bollywood dancers.

Actor Varun Dhawan, after October and Sui Dhaaga, is all set to return to his dance genre in choreographer-director Remo D’Souza’s next movie. The crew was in Punjab — and what could be better promotion for an upcoming film than spreading a few good words about it at a ceremony which would be telecast live? 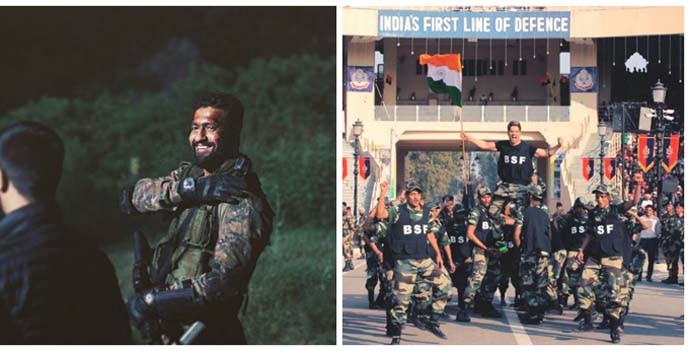 The 'josh' was high on the Wagah border. (Photo: Twitter)

So, Varun reached there — and mesmerised the audience.

That's promotion for an upcoming movie.

What about the movie that has already been released and goes perfectly with the mood of Republic Day?

Well, Vicky Kaushal and Yami Gautam — soaking in the success of Uri — The Surgical Strike — were also there.

So was ‘How’s the josh?’ — a much-celebrated dialogue from the movie.

Absolutely thrilled and honoured to celebrate #70thRepublicDay with our First Line of Defence- the BSF Jawaans and a crowd of 28,000 Indians at the Atari Wagah Border. “HOW’s THE JOSH?!” 🇮🇳🙏 pic.twitter.com/1XcYs2Qbsv

But, our josh aside, the people on the other side of the India-Pak border must thank these actors for showing them a glimpse of what the Bollywood scene is presently like, as clearly Uri, a film on the Uri terror attack of 2016 and the following surgical strike, can’t release in Pakistan. Also, without Valentine's Day, the traditional Basant Kite festival and Bollywood films (all banned) — they must be living such a boring life in Pakistan!

We are surethat at least Varun dancing in his BSF clothes and Vicky Kaushal shouting 'How's the josh?' have made news in our neighbouring country.

There is a crazy coincidence in this regard.

In 2014, Sonam Kapoor and Pakistani actor Fawad Khan had visited the Wagah border for the promotion of Fawad’s first Bollywood movie Khoobsurat. During that visit, Sonam Kapoor shared her Pakistan connection. Good old days, one may say. But the connection is crazy because the Uri attack affected Bollywood. Demands to bar Pakistani artistes from working in Indian entertainment industries were raised when Fawad was just three films old in Bollywood.

Uri director Aditya Dhar was working on his debut — and had his first film with Fawad shelved as Fawad had to leave India.

Then, he started researching on Uri — and here came the film.

A good time to reminisce over stories like these.

And for our neighbours to be thankful for the little bit of joyful josh our stars provided them with on the border.