Delhi Daredevils pull out of IPL 9

After playing six matches, Delhi Daredevils has won four and is ranked second in the IPL points' table. For a team that has found comfort at the bottom for the last many years, this has not been entirely easy to handle. There is thinking in the camp that one bad game is just round the corner and the slide will start again. One loss will lead to another and then yet another, and before you know it, Delhi will be keeping Punjab company at the bottom.

Still it does seem drastic for a team to pull out of the tournament but that's just what DD has done. After a surprise win against Kolkata Knight Riders (KKR), Daredevils' owners decided to pull the plug on their team's participation in the tournament.

This did not go down to well with their mentor, Rahul Dravid who was at first very upset and unavailable for comment. Only yesterday during Carlos Brathwaite's over, a perceptive DD coach, Paddy Upton had remarked, "awesome theatre unfolding". What followed were no balls galore, a beamer, byes and a six, all off one ball. That ended a 22-run-over for the hosts.

Few knew then that DD's end in IPL 2016 was also round the corner. Players and team management have all been directed to take screenshots of the points' table for posterity. At eight points after six matches, DD is just behind table toppers, Gujarat Lions.

The Rs 8.5 crore player, Pawan Negi is reported to have taken some of the blame on himself. After scoring just 32 runs in five matches, Negi believes he is responsible for the pessimism in the DD camp. A hangdog Negi mumbled, "Even though I have three not outs in five innings, I have not done enough with the bat." Negi has only bowled five overs so far, last of which went for 19 runs. The bowler adds, "Zaks bhai trusted me with the ball in the third over, how did I repay his trust? I gave away 19 runs. I was throwing darts not bowling balls". 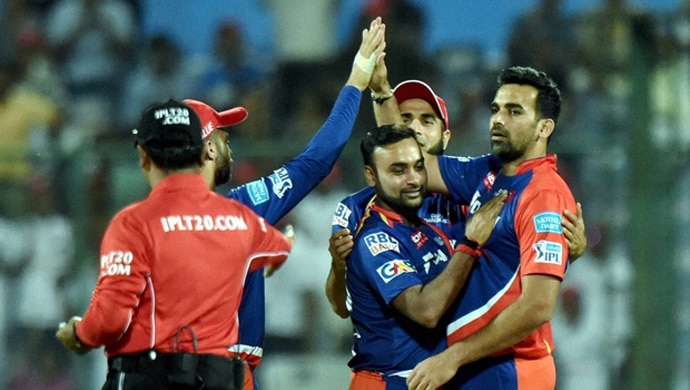 After a spectacular catch and direct hit run out, a buoyant Shreyas Iyer wants to share some of the blame with Pawan Negi, "What Negi has not achieved this season pales in comparison to what I have not achieved. Rahul bhai believes in me so much, even more than me believes in me. Yet each innings I have thrown it all away. As an opener to score a duck is bad but to score three ducks is unforgivable because a duck in no score in my book. Negi has scored 32 in five, what have I scored? Nothing. 22 runs! In five innings. No not outs also."

While Negi and Iyer are in a tug of war for Delhi's self enforced ouster, Quinton de Kock appeared quite unscathed. "I have a fifty and a hundred, and even though it was against Punjab and Bangalore's bowling, no complaints, I like to see the ball and hit it even if it isn't in my hitting arc that may explain the low scores but I've now played six matches on the go and that's more than I've ever done for Delhi before."

Not everyone is unhappy with DD's decision. The folks at Kings XI Punjab (KXIP) are delirious, attributing Murali Vijay's appointment as captain for the team's change in fortunes. That too without playing a match under him. Even though Punjab has lost five of its six matches, they need to win just three more to draw level with the vanquished Daredevils. If they ensure a better run-rate then they may not rest at the bottom of the table.

Finally, when Rahul Dravid was cornered for a comment, he did say in a somewhat weary, deadpan way, "Our next match was to be against table toppers, Gujarat, but to pull out like this is an extreme measure. I'm in talks with the owners to at least wait till May 7... that's when we play table toppers from the bottom, Kings XI Punjab."

Post your comment
#IPL 9, #Delhi Daredevils
The views and opinions expressed in this article are those of the authors and do not necessarily reflect the official policy or position of DailyO.in or the India Today Group. The writers are solely responsible for any claims arising out of the contents of this article.