What our politicians can learn from Canadian PM Justin Trudeau

[Alert] This is probably a little too ambitious for you.

Good afternoon, Indian politicians. Please maintain order and decorum, because the following module could change both - your lives; and the scruffy, dogged face of politics in this country. Allow me to reiterate in a language you may understand. "Baith jaaeeye, baith jaaeeye!", "I cannot take up this bill in pandemonium". "WE WILL IRREVERSIBLY GIVE UP ON THE NJAC ACT!" Great, now that I have your attention, please listen carefully.

As you may have noticed, if your piously enabled search filters will allow it, Canada has a new prime minister. And while, in May 2014, there was a rather depraved piece on our own, wherein he was likened to "that single uncle you fancy who occasionally comes over for meals" and what not, Justin Trudeau has the internet in (borderline illegal) collective swoon mode. Seriously, the memes are salacious, the Facebook statuses are debauched, the media reports are almost unseemly. Whether it's the unturnoffable video of him stripping down to an undershirt for charity, his ominous resemblance to Jim Morrison, his erstwhile mane with locks cascading onto his face with elegance and gr.... I digress.

In an endeavour to prevent this from becoming a really terrible remake of The Bad Teacher, let's get straight to it. There are things you can all, dear Indian politicians, learn from Trudeau's example. And these lessons include more than just taking a cue from his boyish charm, trying to acquire his burly boxer build, aspiring to one day posses his dreamy green gaze liberal politics.

Also read: Now you know why Justin Trudeau is the hottest PM on Planet Earth

While we struggle with some tremendously bizarre and equally stringent sections of the NDPS Act, Trudeau is all set to legalise marijuana in Canada. You would all do well to at least consider his thoughts on the subject, dear Indian politicians, before you dismiss them as quickly as you do the slight, miniscule, Lilliput of a chance that the beedi (barons) you so wholeheartedly support might kill us sooner than a spiff or seven. Please, with all the benevolence of the God you do it for, stop traipsing around in those shorts and starched white shirts. Heck, if you're going to sport the camel toe with that much pizzazz, at least don an ill-fitted pair of pants to help our cause (which is essentially to retain our sense of sight). Else, you could always try the dapper suits Trudeau dons for his photo-ops. Take, for example, the one where he struts on the street, while his muffler casually blows in the wind. We hear that look is in this season (Read: we really have no idea what's in this season, just wear anything that doesn't make you look like a septuagenarian at a really terrible back to school party). 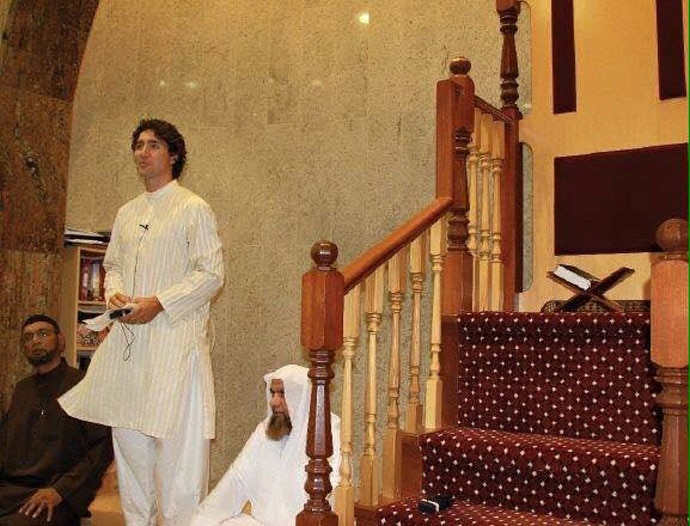 The Canadian PM at a local mosque.

If you're going to do tokenism right, do it like Trudeau did (that could have been a great campaign slogan. There's hope for you yet, Donald. Have your guys call me). Last year, he visited the Islamic Community Centre of South Shore, just south of Montreal, which donated over $11,000 to the International Relief Fund for the Afflicted and Needy. The Liberal leader also visited a south-end mosque in Regina this year, where he was greeted by the local imam and several people before participating in an evening prayer.

This is probably a little too ambitious for you dear Indian politicos. You start by trying on a skull cap. This JT stripteases for charity. How thoughtful.

There are two videos of Trudeau that have gone viral recently. One is meant for the secret viewing by your comrades in Parliament (this teacher knows her audience and her audience is prudish) and the other is for everyone. The Canadian prime minister knows how to bust a move, bhangra even. And we'd all (not just politicians) do well to learn a step or two. Wedding season is around the corner.

"Women should not go out late at night."

"There is no need to give phones to women and children. They distract them and are useless. Why do women need phones? My mother, wife and sister never had mobile phones. They survived without one."

"It is heartening that the prime minister of Bangladesh, despite being a woman, is openly saying that she has zero tolerance for terrorism."

Here's what works (Priyanka and Parineeti, take note too.)

So, in sum, all I have to say is, Do It Like Trudeaus! (Seriously, Hilary, I'm available.)

#Justin Trudeau, #Canada
The views and opinions expressed in this article are those of the authors and do not necessarily reflect the official policy or position of DailyO.in or the India Today Group. The writers are solely responsible for any claims arising out of the contents of this article.