How dare you doubt PM Modi's warning to gau rakshaks?

All will be well now. There may be 'short-term pain' and then... 'achhe din'.

There, he said it! The great leader said it: "Some anti-social elements have made 'gau raksha' a medium for spreading anarchy. This is affecting the image of the nation."

What more do you want now? Is it not enough that he took time out from other global tragedies such as fire in the jungles of Portugal and tweeted this? It requires great courage and an empathetic heart from the head of the state to come out with such a heart-warming tweet.

Sad to learn of tragic loss of lives in the forest fire in Portugal. Deepest condolences to the Portugese people on this tragedy.

I don’t know about you but I felt enormously reassured when I saw the tweet. All will be well now… err sorry “there may be short-term pain but aagay jaake ab sab achha ho jayega”.

Three years of mind-blowing performance on every front and we are still doubting the great leader over his commitment to the nation and his priorities? Come on people, nobody has made an awkward hug trendy like he has, the world over. 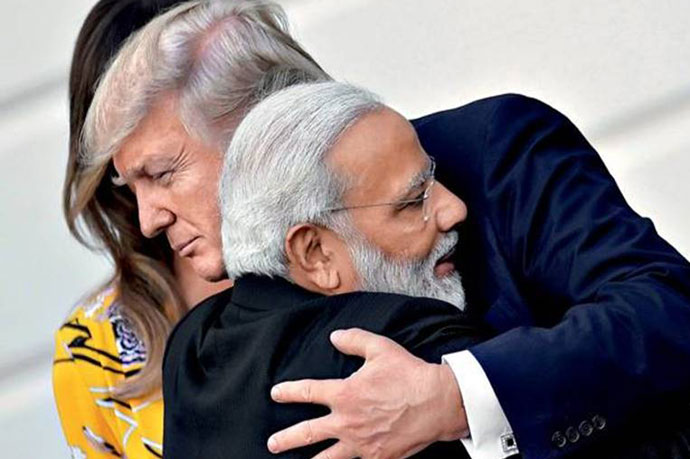 Ask any world leader today and they will confirm that the great leader indeed uses a deodorant. I don’t know about you people but from where I come, which is Uttar Pradesh, a deodorant is a big deal.

Why else would a large-hearted Yogi distribute soaps to people before his visit? Considering the fact that in most parts of the world, we are known as “smelly Indians”, these hugs have gone a long way in changing that perception about Indians. What an achievement, what a leader!

But let me not digress. Look at the great leader’s performance-sheet. Every promise that he made has been fulfilled. The problem with you people is that you want immediate results when the mantra is as I said, "Aagay jaake achha hoga". Some so-called economists are shouting that the GDP is down. Others say there is no sight of the promised new jobs to be created, Naxals are still flourishing, Pakistan is more mischievous than ever, more attacks on security forces, Kashmir slides further into chaos, demonetisation has wrecked havoc, farmers are being shot, Junaid Khans are being lynched and other such insignificant stuff.

And what’s worse, they come up with solid facts! That’s when it becomes humiliating for the great leader. And that cannot be tolerated. Who cares about facts anymore? Can't you come up with something fascinating to counter his unquestionable surge other than facts? Facts are passé. Can't you learn anything from the likes of, say for example, Smriti Irani?

She once offered to send her bangles to Manmohan Singh when Pakistan was being Pakistan at the LoC? Now she has changed, reformed I would say.

There is nothing wrong in changing colours like a chameleon. Chameleons are a distinctive and highly specialised clade of old-world lizards (Wikipedia says it). That is the kind of effect a great leader has. He turns bad actors into reptiles. But where are those bangles now?

Well, "to Ekta Kapoor belongs every bangle and to Ekta Kapoor only it will eventually go". RIP those bangles! If Smriti Irani were to counter the great leader with facts, like you so-called educated intellectual, those bangles would still be waiting for moksha.

A tweet by the great leader should be enough. He has done his job. Don’t you remember when your father used to give you balloons on Holi to hit unsuspecting strangers on the streets? And when you went overboard with those, he would just lazily admonish you and ask you to stop? Lazily because in his heart he would say, “Bura na mano Holi hai.”

He did not actually mean to stop you. He wanted you to have some fun. And neither did you stop because you knew that your father loved you and you had heard him say, “Holi ke naam pe sab chalta hai”.

So what if your father got you balloons in the first place, he did eventually ask you to stop, albeit lazily. Can you blame your father? Then why blame the great leader?

Agreed he gave the balloons to the "gau rakshaks" but he just tweeted, which was nothing less than the same lazy admonishment. If your father did his job, so has the great leader.

The only little insignificant difference is that it's not Holi, but murder.

Blessed are those who are followed by the great leader on Twitter!

#Lynchistan, #RSS, #Congress, #BJP
The views and opinions expressed in this article are those of the authors and do not necessarily reflect the official policy or position of DailyO.in or the India Today Group. The writers are solely responsible for any claims arising out of the contents of this article.