Die-hard fans are in a quandary whether to outrage or forgive the master.

One way to get back into the news is to pick your all-time XI and not pick Sachin Tendulkar. It's been happening for way too long, and is now an accepted absurdity among former players.

From the day Tendulkar decided to play cricket, he has been in every playing XI he set his eyes upon.

From the Tendulkar's XI that was picked by his father to the Aji XI picked by his elder brother; the Achrekar’s XI picked by his coach, Shivaji Park XI (where he played his early cricket), SD Burman XI (who he was named after), Sahitya Sahawas Cooperative Housing Society XI, Sharadashram Vidyamandir XI, John Bright Cricket Club XI, the list goes on and on.

It’s an undisputed fact that Tendulkar has been part of every Indian playing XI since he made his Test debut, except when he had made himself unavailable for selection. And even then, he made it to the Wimbledon’s XI.

Only a few days back, Sri Lankan cricketer Kumar Sangakkara came out with his greatest cricketing XI that has only one Indian in it, and no, it’s not Tendulkar – it’s Rahul Dravid. More than Tendulkar’s exclusion, it was the inclusion of Sri Lanka’s Aravinda de Silva ahead of him that has riled fans. 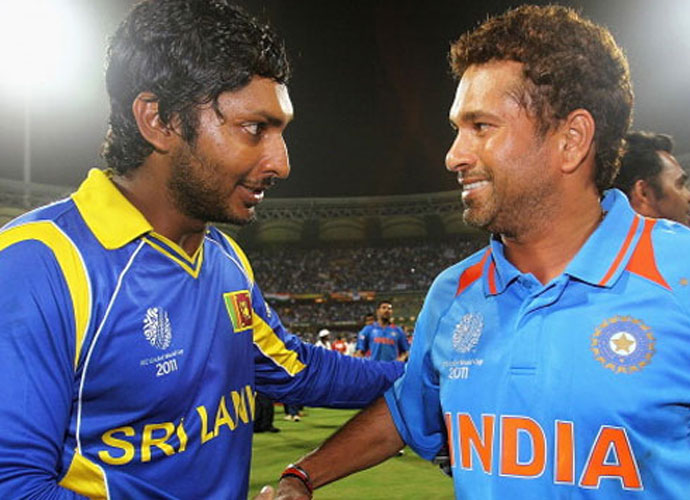 No place for Sachin tandukar in Kumar Sangakkara's team.

Stats nerds were quick to point out that de Silva’s batting average is much lower than Tendulkar’s, less than ten in both Test cricket and ODIs. Still others said that Tendulkar had to play with the hopes of a billion people on his shoulders, whereas de Silva only had some 20 million hopes to live up to.

Rahul Dravid, who has been accustomed to playing second fiddle to Tendulkar, was at first stumped at Sangakkara’s selection and even prepared to vacate his spot for Tendulkar if it made fans happy. But Sangakkara said it was his list and Dravid couldn't create a vacancy for Tendulkar.

If de Silva’s inclusion wasn’t bad enough, another contemporary edging Tendulkar out, Brian Lara, has made matters only worse. The Lara-Tendulkar debate which seemed to have been doused since the retirement of the two players, has been rekindled.

On the back of Sangakkara’s list, English batsman Alex Hales has presented his XI, eerily similar, not just because of the player’s included, but because of Tendulkar’s exclusion. Yet again, only one Indian makes the grade, this time it’s life-long Tendulkar devotee, Virender Sehwag.

Sehwag, who has found his voice on Twitter these days, was his usual outspoken self when he tweeted, "Who the Hell is Hales?? Joke of a list, me before God?? And McGrath before Nehraji ?? By GAWD."

Throughout, Tendulkar has been his usual phlegmatic self, refusing to be drawn into needless controversies. Even a world XI by Vinod Kambli that includes Vinod Kambli but excludes Tendulkar has not affected the man who scored a hundred 100s.

In his own style, Tendulkar has made his best of the best XI that doesn't feature the Master Blaster himself. Whereas many feel that the person making a list cannot include himself, die-hard Sachin fans will have none of it. Some are angered at Sachin himself, asking him to redo the list and add his name to it with "previous errors and omissions excused" also added at the bottom.

For the record, Tendulkar excluded both Sangakkara and Hales from his best of the best XI.

According to Tendulkar, Ganguly leads the team, whereas Harbhajan was picked as chief instigator. Tendulkar also felt that Gavaskar would be the ideal man to lead the team off the field.

A 12th man who would also double up as cricket director was also included: Ravi Shastri.

#Sourav Ganguly, #Kumar Sangakkara, #Sachin Tendulkar
The views and opinions expressed in this article are those of the authors and do not necessarily reflect the official policy or position of DailyO.in or the India Today Group. The writers are solely responsible for any claims arising out of the contents of this article.