External affairs minister's quick repartee to a tweet about a faulty refrigerator has social media in splits.

The ministers in Modi government are known for being active on social media platforms, especially Twitter. External affairs minister, Sushma Swaraj, is undoubtedly one of the more than usual tech savvy ministers from the lot. Now that the Twitterati knows about Swaraj's helpful nature, a man on Monday tweeted about a faulty refrigerator to the external affairs minister. He also tagged Ram Vilas Paswan, the Union minister of food and public distribution, consumer affairs in his tweet:

Most people would usually ignore the tweet, but Swaraj being the Twitter savvy minister that she is, sent a superb reply to the man:

Brother I cannot help you in matters of a Refrigerator. I am very busy with human beings in distress. https://t.co/cpC5cWBPcz

Her repartee garnered a staggering applause from Twitter, with approximately 5,400 retweets in no time.

@SushmaSwaraj Sushma Ji, 2 Years. 39 Indians hostage of ISIS in Iraq. You assured they r alive. Since you are busy with humans, any update?

@SushmaSwaraj lolz! The Lady got some humor as well hahahaha

Not only does she reply to tweets from ordinary Indians, Swaraj is also known to help as many people who reach out to her via the social media platform. Once she helped rescue a girl from the clutches of human traffickers in the United Arab Emirates. Dev Tamboli tweeted to Swaraj about his sister who went to UAE for a job but was in fact locked up in a room: 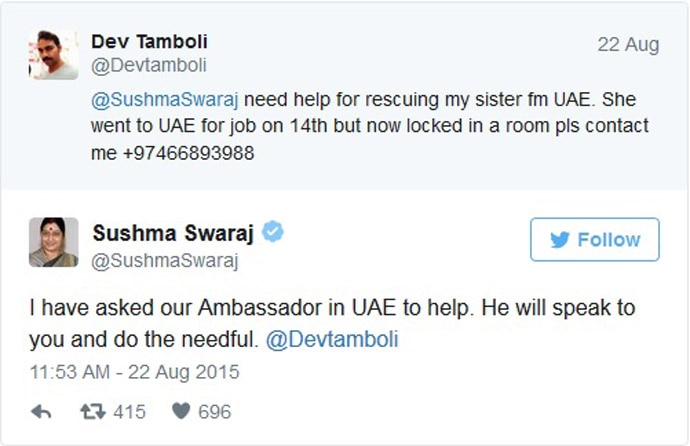 The external affairs minister immediately took action and the girl was eventually rescued and sent to a shelter home run by the Indian embassy in Dubai.

In another incident, Swaraj helped rescue a Dutch girl who went missing in Rishikesh. Her active involvement, whether it is to help Indians stuck abroad with passport issues, money problems, or facilitate rescue of Indian nationals from conflict-ridden West Asian countries such as Iraq and Yemen, has made her quite the Joan of Arc on Twitter. Interestingly, she is also the woman world leader with most number of followers on Twitter.