Durga Puja also signifies what we would like India to be

There’s a strip of dirt-land where the colony kids run about with a bat and ball. Sometimes, the ball is a tennis ball, and the bat is plastic. But the game is always on. Maybe that’s why this little strip of mud in North Delhi escapes Delhi Development Authorities' generous horticulture. The strip transforms in the monsoon, throwing out a profusion of short-lived grasses and yellow-hearted flowers. But the bigger transformation is yet to come.

A few days after the monsoon retreats, bamboos are erected and a tent is put up. Artists from West Bengal descend to perform a curious art form - cutting intricate shapes out of the urban-omnipresent, pale-white thermocol - a modern quick fix to older forms of carving art. These are arranged over the tent, and around a chamber. The antechamber dresses itself up in various styles - there are paintings, shola (white stem) work, the thermocol shapes, and occasional terracotta decorations. The chamber is for the goddess Durga and her four children, Kartik, Lakshmi, Saraswati and Ganesh. But the pandal is for everybody.

Across India, every year on Durga Puja, innumerable nameless strips of land - Mother Dairy parks, colony community areas, shaadi halls, gardens opening out into driveways, even the road itself - transform into pandals. Some are wondrous, competing amongst each other for the most transformative experience. Some could be Harry Potter’s Hogwarts castle, some could be ships, some could even be UFOs. Others represent more traditional temple-tent forms. All of them are metamorphic in what they do to the space they stand in.

This is not only because of the chaanda (collected funds), effort and design elements that go into the creation of the pandal. It is squarely because the space the Durga Puja provides has far less class and religious barriers than other spaces devoted to worship. 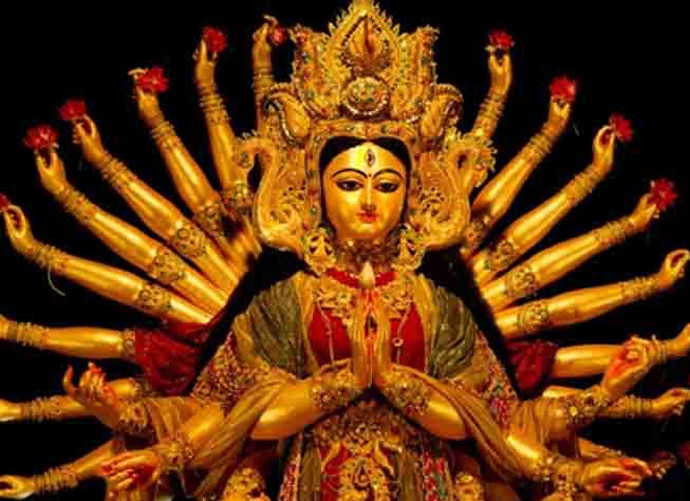 Puja is glamorous, but it also has character that somehow brings out the best in us.

It isn’t a platitude to say that people of all faiths regularly visit our Durga Puja and many other pujas. One can make a religious allegory and say the pandal is like a dargah. But it may be more accurate to say this is a cultural space, cherished and given away both, where most are welcome.

They say if you have one Bengali, a lot of fish and mutton will be eaten. And if there are two Bengalis, a puja committee will be formed.

Bengalis are not the easiest community to deal with. They are known to be argumentative and intellectualising (though more given to sharp words than sharp blows) and have been accused of being downright dominating towards states around West Bengal.

What makes the Bengali festival of Durga Puja any different?

There is joy, abandon and new clothes. The sense of volunteerism a community event calls for comes forth, clothed in new jamdanis, silk kurtas and anarkalis. Millennials with perfect nails and haircuts will lift buckets of food to serve during bhog. Boys and girls will cut their teeth on pandal design, overseeing lights and wire installation - hopefully with insight. Someone will go around with a chaanda book, asking for money with no particular experience of any sort of fund-raising. Others have to be around to "guard" the Devi till she is completely decorated.

If the space wasn’t so bare to start with, and if it didn’t have to be transformed so completely, the volunteerism wouldn’t be so all-consuming and complete.

Bhog will be served by whoever has hands to do so - could be a Hindu or a non-Hindu. Whoever comes, is served - again, it could be Hindu or non-Hindu, rich or poor, Bengali or otherwise. The beauty is this doesn’t need to be pointed out within the space of the pandal.

Puja is glamorous, but it also has character that somehow brings out the best in us. Could it be the seduction of the dhol, the dazzle of new clothes and old jewellery, or the simplicity of those who will come without new clothes, but with just garlands in their hair, and a clean, pressed dhoti around their knees?

Could it be the community itself purges its heart through puja’s brief excesses, becoming altogether more generous?

Whatever it is, the space of the Durga Puja offers both a whiff of delicious freedom as well as a sense of being in something bigger than us. It shows us, in a brief five-day period, what we would like India to be.

Also read: The dark side of Durga Puja Bengalis don't like to talk about