Auroville: On how to get lost in jungles

All I could see was thick tree trunks, covered with creepers, and not much else.

The small of my back was killing me, pushed up as I was against the handle bar of the Royal Enfield Bullet, with Kerstin sandwiched between me and Jean-Louis, a portly 60-something-year-old who has just rescued us from having to navigate through jungle terrain with a rickshaw driver who did not know our destination: the Youth Centre in Auroville, near Pondicherry. Auroville is the commune built by "The Mother", life companion of Aurobindo, the Indian freedom fighter and philosopher.

I laughed hysterically, partly from fear after said bike and occupants bounced in the air, after yet another treacherous path through potholed dirt tracks, palm fronds sweeping past us as we sped. 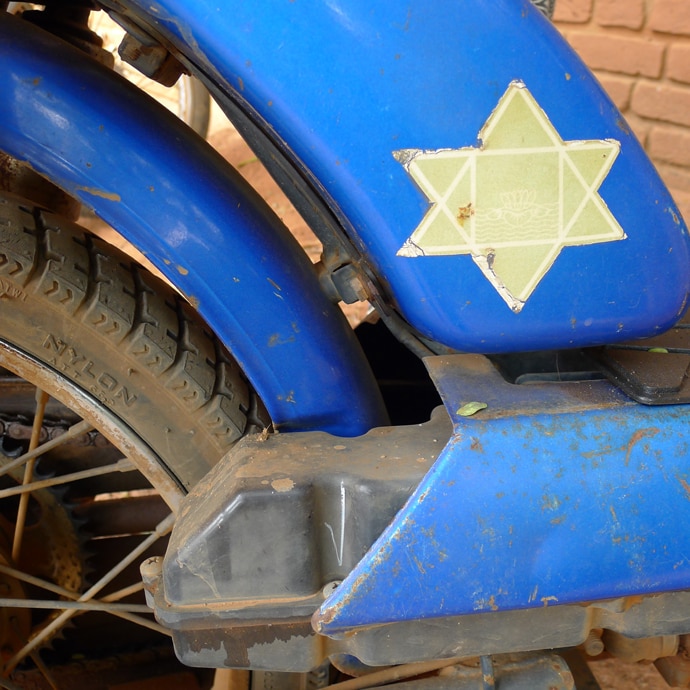 "You alright back there?" Jean-Louis shouted through the wind.

"Yes!" I cried, through gritted teeth.

"What did he say?" I yelled into Kerstin's auburn coconut-oiled hair. The other two happily bantered away in French while I clung to the handles on the side of the bike for dear life. She replied, inaudibly, and grabbed my right thigh, for good measure. I was somewhat mollified.

We finally reached one of the village's main shopping streets, a dismal affair, but I was only too happy to get off the bike, in ungainly fashion. Kerstin beamed brightly at Jean-Louis, exchanged goodbyes, and then he was off.

Wonderful, I thought. That would be the last time I'd ride pillion with another two passengers on a bike with no helmets on.

I was wrong, of course. Never say "never" in India, I'm beginning to learn. Theo, a German who was in Auroville to visit his brother, Steffen, a denizen of the commune, and I were stuck in a distinctly undeveloped patch of the jungle. It was late. Steffen with Kerstin riding pillion, and his cousin, Birgitta, another resident of Auroville, had sped into the darkness that now enveloped us. I gazed skyward, at the stars. How clearly they twinkle, I thought to myself, quite sure that the others would come back for us, stranded as we were with a motorbike which had mysteriously spluttered to a stop. Theo checked the fuel gauge - the diesel has run out. Wunderbar.

The trio returned in due course, the light from the two bikes cutting through the swathe of forest, illuminating the Royal Enfield Bullet that Theo was sitting astride on. After a short discussion, including calling people who lived in the neighbourhood, the brothers decided to wheel the non-functioning bike to a nearby farmhouse. We switched rides, with Kerstin and I now riding pillion with Steffen, and Theo with Birgitta.

If my back hurt before, this was nothing compared to the agony I now felt. The only consolation was unlike Jean-Louis, Steffen was slimmer and therefore I had a bit more space at the back of the bike.

Birgitta paused at a dirt forkroad. Kerstin and I later wondered how the Aurovilleans manage to find their way around, with very few road signs and no maps. She took a right, Steffen's bike following closely behind.

We soon reached our destination: a wedding party. I gratefully clambered, crab-like, off the bike.

The bride is a salsa instructor originally from Tibet; the groom from France, is a dance teacher. We turned the corner to find the happy couple and guests grooving in a thatched hut surrounded by artificial small canals filled with water lilies. How beautiful and appropriate somehow. Birgitta and her cousins wandered to the buffet table; Kerstin joined in the dance. An inebriated Frenchman, most probably in his late twenties, with dreadlocks and dreadful alcohol-laden breath, tried to twirl her this way and that. We managed to extricate ourselves from the party at its roaring height. The bride's mother in traditional dress was doling out huge chunks of the exquisite chocolate truffle cake to the chattering guests. Dave, the wedding organiser and expert dancer, entreated us to stay. Having slept a miserable three hours the night before, I was desperate to get some shut-eye. Kerstin's goodbyes, to my tired mind, seemed interminable. I tapped her shoulder impatiently.

I had procured ourselves another rickshaw. To Kerstin's alarm, when we got in, we had not one man helming the vehicle, but two.

"Isn't it a bit dangerous, with two men??" she hissed at me in German.

I was a bit past caring at this point in time, but she had a point. The rickshaw took off, along with its worried passengers.

We got lost in the jungle. All I could see was thick tree trunks, covered with creepers, and not much else. We did a U-turn, the rickshaw careening sharply at one point, close to tipping point. I locked arms with Kerstin, both of us cursing under our breath.

"Don't tell my mom about this," she warned me, in German.

Thankfully, we got back in one piece.

The next morning, after a half-hearted attempt on my part to join Kerstin in her daily yoga exercises, I took to sitting on the terrace's parapet instead, rubbing my still sore back. We hurried to a waiting cab with Kerstin's mother to the much-talked about Matrimandir (or "Temple of The Mother" in Sanskrit). Our appointment to meditate within the sanctum sanctorum was at 10.50am. I wanted to see what all the fuss was about. I recall vaguely reading about Henri-Cartier Bresson's photographs on Aurobindo and The Mother.

"Now just watch me. You can meditate either in the front row, or at the back, where they have placed pillows against the walls. And you'd have to wear white socks. Oh gosh, I almost forgot about the white socks!!" Kerstin grinned. To prepare me, Kerstin showed me newsletters from the commune, as well as a map and layout of the Matrimandir, to familiarise me on what to expect. Little of it made sense at the time: special, dimly-lit meditation rooms which surround the gigantic gold-plated golf ball that was the centre, called "Petals" named after flowers chosen by The Mother, a Frenchwoman. She was six years his senior and manifested Aurobindo's teachings in the commune, a utopian concept of ecological and spiritual living that came into fruition with the building of the Matrimandir in 1991. The commune itself came into being in 1968. She passed away in 1973, 23 years after Aurobindo's death. The Aurovilleans whom I met spoke in awed tones of Aurobindo and The Mother. The current community number 2300 residents, of whom 911 are Indians.

At the entrance to the mediation chambers, the Petals, we were told by a French volunteer to take our time to select one. Again, only those who have access to the inner chamber, would be allowed to visit the Petals. We saw other tourists being turned away, politely but firmly. The entrance to each Petal was signposted in French by the quality symbolising each flower: Existence, Consciousness, Bliss, Light, Life, Power, Wealth, Utility, Progress, Youth, Harmony and Perfection, with Kerstin explaining each sign to her mom in German. In a whispered huddle, we chose "Progress" for practical reasons: it was less dim than the others, and had only one occupant.

The room was cast in a bluish glow, with a white floor and white floor cushions. A golden sculpture - only geometric shapes are used in the interior decoration of the temple - was the focal point of the chamber, looking like a huge golden eye.

We meditated for a while, and then turned up dutifully, at the appointed time, before the steps leading to the inner temple.

A gaggle of Indians and Chinese and a smattering of foreigners emerged from the entrance. The foreigners looked suitably awed; the Indians did not.

A graceful, tall Frenchwoman, her hair tied back in a jaunty ponytail, ushered them to the waiting Petals.

The discipline was immaculate: first of all, we had to line up our footwear neatly, side-by-side along the other visitors'. No talking was allowed, so the past hour was spent in silence. We queued up in a straight line, supervised by the stern white-clad volunteers, all of whom were French. One man appeared to be in charge. At his signal, we trooped, slowly, reverently to the inner sanctum.

I did not know what to expect.

It's a bit like visiting the Reichstag, the German Parliament, to the top of the dome designed by the celebrated British architect Norman Foster, with its sweeping, gently elevated glass-sided pathways leading around the dome. The dome itself reminded me of being inside the BMW World in Munich, but this building was aglow with an ethereal, soft orange light. White sentinels directed us to the entrance of the inner temple proper.

Through two wide doors, I entered an otherworldly scene: a shaft of light cutting a straight path down from the roof onto a huge crystal ball on a golden pedestal comprising of a star of David on each side, with a square where the two triangles intersect. There were 13 white marble pillars, with three floor cushions between them, and another three behind. The room pulsed in bluish shadows. Each one of us shuffled silently, in our white socks on the plush, carpeted floor, like silent acolytes before a temple sacrifice.

We sat there in that peaceful silence for a full half hour. I was used to meditating with my eyes closed, but with that scene before me, this giant crystal ball, others like me sitting cross-legged across the hall, the pillars soaring above us, that shaft of light: I drunk in the wonderment of it all. It pleasured me to be in a quiet place, away from the chaos and drama of Delhi.

All too soon, the volunteers reappeared, taking their seats amongst us. It was time to leave.

Post your comment
#Pondicherry, #Auroville, #Travel
The views and opinions expressed in this article are those of the authors and do not necessarily reflect the official policy or position of DailyO.in or the India Today Group. The writers are solely responsible for any claims arising out of the contents of this article.