Open your mind, and your heart. Ditch symmetry, let the flowers run riot. Teach your kids to nurture and watch the garden, grow.

I am sitting at my desk by the window, schooling myself to write, but it is tough to be inspired when the mercury hovers around 45 `Celsius. Perfect excuse, the heat, I tell myself, as lethargy seeps into my bones. The mind, already susceptible to distraction, wanders, then seizes on a flurry of wings and chirps and the drama unfolding past the window, on the edge of the verandah.

It’s Bird War Three (three, as we have already had two in the morning) out there.

The bone of contention is this nice piece of real estate that we have provided for, actually a small earthen pot attached firmly with its mouth facing the wall and shielded by the gorgeous “Rangoon creeper”, currently in full bloom.  A small opening for the birds to enter, and bedding — bits of straw, and tiny slivers of cotton — have been provided for. There is a watering hole nearby for a drink and some gossip when neighbours drop by.  This is by way of a shallow earthen pot that also doubles up as a swimming pool, with many a winged creature plunging in for a cool dip. Food is supplied, morning and evening. The menu is largely routine — poha, broken rice, millet, buckwheat, occasionally varied with bits of roti, or boiled rice, all of it scattered near the water bowl. 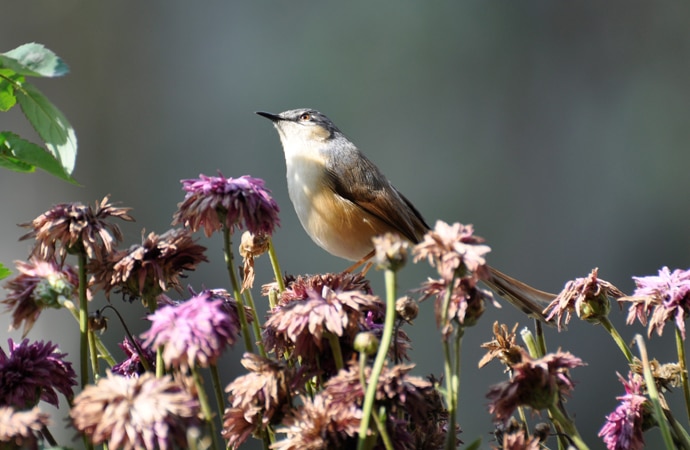 The jungle telegraph is very efficient. Word has spread about this super deal on offer, and many hopefuls have dropped by. There is nothing polite in the way they lay claim — after all, isn’t land grab is the order of the day? The bulbuls covet the “nest” and try to shove the sparrows and the silverbill — such a pretty little thing — aside. The silverbill is too timid, and loses in the first round. The male sparrow is a bit of a bully (he has bashed up his puny rival) and is determined to occupy the nest with his rather indifferent lady love, whom he has brought over to check the premises.

Unfortunately for him, the bulbul won the day and is now housed in the pot.

As for me, I have abandoned work and am hurrying over to the potter to get more of those earthen vessels — and a home — for the sparrow, whose heartbroken chirps are a bit too much to bear.

No complaints, the birds by my window are pretty much the only thing that tides me through the searing summer (admittedly, lychees and mangoes play their part as well).

The bowl of water attracts other winged visitors. There is the common myna — dapper in its black-brown coat and startling yellow beak; the tiny sunbird, incandescent purple in hue; the rare shikra (a raptor), its beady orange eye hunting for prey. The seven sisters, as jungle babblers — gregarious, chatty birds, known to hang about in small groups — are also called, are delightful. Watching the sisters, as they sat and fluttered, gossiped and pecked at their food, it was easy to imagine they were at a kitty party (no dig this, just a straight comment, meant to be taken at face value). I am particularly fond of the occasional tree pie that drops in. With their ochre and black coat, they remind me, well, of tigers; not least because I have seen them pick at tiger’s teeth for their bit of meat. Yeah, you heard me right, these gutsy birds these have earned the nomenclature “toothpick” for this trait.

I have heard the insistent “did-you-do-it” of the lapwing some nights. The call is getting rarer, though, as the lapwing is a ground nesting bird, and needs roughage, not the manicured lawns we seem to prefer. Yesterday, a peahen dropped by and made my day. I have also spotted the white throated kingfisher, yellow-footed green pigeon, grey hornbills, cattle egret, Indian robin — to name a few.

My absolute favourite is the lovely white-eye, a small, luminous yellow-green creature, with its eye ringed in white.  Come spring, I make it a point to line my verandah with genda phool, which the white-eye seems to favour.

It is not just about birds.

Don’t tell my neighbours (they are known to be squeamish and intolerant, to say the least), but for the past two years that earthen pot sheltered a different species altogether. Wasps. We had an understanding, the wasps and I: we gave each other plenty of space, and went about our business. In the water bowl I also dropped in some pebbles, which gave the insects a “leg” to stand on, and slurp water.  Naah, don’t cringe, wasps and bees are critical to our food, and economic security, and actually pollinate crops — commercial and wild — worth many billions of dollars. In my tiny garden, I believe they pay me rent, and water tax, by ensuring I have a bumper crop of flowers, veggies and fruit: champa, genda, raat ki raani, zinnia, impatiens, sunflower, bougainvillea, tomatoes, basil, curry leaves, lantana, guava etc.

I am poor in identifying butterflies, but I do know that the common tiger, the peacock pansy and grass jewel — which can be found flitting among the flowers outside. There are jewel like beetles, which protect plants by feeding on insects that feed on the plants! There is the occasional garden lizard, which the nephew is fascinated by, as he watches it transform from an insipid skin to an angry red hue.  I like as it favours flies and such like, and keeps out of the hearth.

A confession, gardening is not a skill I possess, in fact I lack the green thumb. But the thumb rule is, this space is for the birds and the bees. I let them be, and they repay me by enriching my humdrum daily routine with much colour and song.

It also takes me back to my childhood, when birds and animals were very much a part of daily life. Fans were shut off summers (really) to prevent harm to sparrows, who nested in the crook behind paintings hung on walls.  Bird baths were part of the architecture in most bunglaows, rotis were cooked daily for the friendly, neighbourhood street dogs by rota, and beehives hung heavy from trees in the garden. Over the years, such sprawling homes vanished, taken over by malls, hi-rise apartments and gated communities. It wasn’t just the spaces that were demolished, what also shrunk was that space in the human heart for fellow beings. As we sanitised our lives, spraying pesticides and poison on any creature we deemed as pests, our world diminished, and perhaps yet unknown to us, got lonelier.

I am blessed to hear bird song in the morning and have butterflies and bees buzzing over my head. There may be the very occasional sting; we brush away the tears, apply baking soda, calamine lotion, and move on.

Yeah, I almost forgot, the added advantage is that the brats around now know that there are other birds on the planet, besides Twitter. In case you’re looking, most tips for a wildlife friendly garden are in the article. Here are a few more for a lively green space:

The golden rule is: NO chemical pesticides or fertilisers.  Keep the garden organic. I have planted garlic to keep the soil healthy and pests away. I also spray neem oil.

Doesn’t matter if you don’t have a garden, you can create a green space in your balcony, on window sills, Or try making a common garden for your society.

Keep water, bird seed and even a shallow bowl of mud (birds love one). It keeps the mites way in your garden/veranda/terrace/window sill, or hang it with a hook in your verandah. Add a bowl full of rock salt to it and you have your own saltlick for birds and squirrels.

Change the water everyday. Clean the container every two-three days.

The “bird nest” (available in the market) should be shaded preferably with plants, and not too visible. If exposed, they will be rejected, as not “safe” from predators like cats.

Importantly, rid yourself of prejudice. Open your mind, and your heart.  Ditch symmetry, let the flowers run riot. Teach your kids to nurture and watch the garden, grow.

#Animal kingdom, #Sustainability, #Ecology, #House gardens
The views and opinions expressed in this article are those of the authors and do not necessarily reflect the official policy or position of DailyO.in or the India Today Group. The writers are solely responsible for any claims arising out of the contents of this article.