When We Spoke: In memory of all the deep, meaningful conversations we have lost thanks to instant messaging

News flash: Conversation, as we know it, is dead and there is nothing we can do about it. The culprit through, is someone we all love and adore.

In 1967, Salman Rushdie, as he informed readers in Step Across The Line, was living in a building on the King’s Road in Chelsea. Under his room, in the same house, was a boutique, often manned by a girl named Sylvie. Mr Rushdie, young and probably romantic, was smitten, and one day, he gathered the courage to go and talk to Sylvie who was "half-love child, half-zombie, (and totally) an awe-inspiring sign of the times". Salman Rushdie wrote Step Across This Line. He was also curtly told 'Conversation is dead'. He was left perturbed. (Source: Reuters)

"Hi," he said to Sylvie. "I just thought I'd drop in and introduce myself, since we're all living here, you know? I just thought it was time we got to know each other. I'm Salman."

In 2019, conversation is truly dead and not just for people like Sylvie but more or less everywhere.

I don't know the new language. 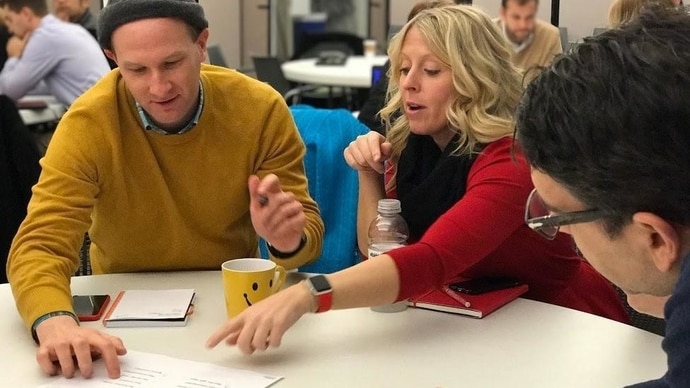 Conversation, the meeting of ideas, the dismissal of the same, through words and expressions, the said and heard, is dead (Source: Reuters)

Recently, when I read Step Across This Line, the Sylvie moment hit me hard. In 1967, it was just Sylvie, and maybe a few others of her tribe, for whom conversation was dead. In 2019, conversation is majorly, and for a significant number of people, dead. It has been killed by what we call instant messaging, that drip-drip of a word left there, hinted here, dropped in this app or copied into that app. Conversations nowadays are all about monosyllables — ‘okay’,’ fine’, ‘cool’ — and words amputated and bloodied — ‘awsm’, ‘grt’, ‘cngrts’ — so brutally that they have no soul remaining.

In 2019, if at all we form sentences, we do so with phrases — ‘lol’, ‘lmfao’, ‘ikr’, ‘nvm’ — that don't mean anything. It's this new language I don't know. I find it difficult to use because it is so barebones, so devoid of meaning, that I can't express anything worth expressing with it. I can give commands with it at work as a lead of a small team or I can do virtual nods and winks with a smiley here, with a "K" there — but I can't piece together anything resembling a conversation that will let me express myself on WhatsApp or instant messenger. Facebook and Twitter are some of the many instant messaging methods that have drained us of real words. (Source: Reuters)

This would not have been an issue though — and definitely not an issue that needs to be talked about on DailyO that usually deals with meatier and weightier topics. If conversation is dead, isn't it a problem only for Sylvie, Rushdie and, in 2019, people?

Yes, and also no, because I see it is probably the case for many.

The new language of conversations in 2019 is so remarkably different, and disastrously so, that it has started affecting the way people think, the way they deal with information, the manner in which they make the world coherent for themselves. It is as if people no longer talk now, as if they have lost their ability to deal in complex thoughts and rich discussions.

Any conversation, or rather, any conversation that is outside an instant messaging app, has to be more than some words put together. Words are just one part of a conversation. There is more to them and their meanings are different. There are layers to good conversations that you can't see or perceive when it is inside a chat app.

Take, for example, the word "congratulations".

Spoken with excitement, it can mean you are genuinely happy for your boss getting a promotion. A bit toned-down, and it means you're just being nice, loving thy neighbour and doing your duty to the laws Moses laid down. Give it a twist and a "congratulations" could be sarcasm. "Yeh, congratulations (you scum!)" when someone not particularly endearing falls down a drain, or maybe it is the angry you, shouting "congratulations" to your son who only got a second division in his exams instead of the first that you were expecting. A real conversation with a real human being can be like a piece of art.

It can evoke something. It can evoke wonder or disgust. A good conversation can gladden tired souls. It can delight people or it can leave them weary, for it works both ways. It can fill them with awe or can make their soul shiver.

Instant messaging? That is where conversations go to die.

Instant messaging is a cold medium. It's probably the coldest one can use to talk. A conversation on WhatsApp lacks character. In fact, if a good conversation is like a piece of art, then instant messaging is akin to taking this piece of art and smashing it on the ground, then picking up the broken shards and throwing them together. That makes a WhatsApp chat a heap of broken fragments of something whole, now incomplete, grotesque, isolated and meaningless. So much empty space: Instant messaging has replaced real conversations. But the funny thing is, it can't. (Source: Reuters)

It  can, and does, sap the soul and dulls thought.

Nearly a 100 years ago, Franz Kafka was furiously writing letters. He was writing them to his then-girlfriend Milena Jesenska. Earlier, he wrote them to Felice Bauer. In-between, he wrote more letters, including to his father. Kafka was a prolific letter writer, often writing 2-3 letters every day. He also apparently hated writing letters because for him, a real conversation was the one in which a person speaks to a person sitting in front of him or her.

In one of his letters, Kafka complains: "Writing letters means to denude oneself before the ghosts, something for which they greedily wait. Written kisses don’t reach their destination, rather they are drunk on the way by the ghosts. Humanity senses this and fights against it and in order to eliminate as far as possible, the ghostly element between people, and to create a natural communication, the peace of souls, it has invented the railway, the motor car, the aeroplane (so people can meet)…. But it is no good. The opposing side is so much calmer and stronger, after the postal service it has invented the telegraph, the telephone, the radiograph. The ghosts won’t starve, but we will perish."

Now in the 21st century, the "opposing side" has invented WhatsApp and instant messaging and while we are not perishing, we are losing the art of conversation, of shifting through complex information, forming complex thoughts and conveying them, using the right words and the right sentences.

Also Read: Race to the Bottom: How racism infects sport, education, film and everyday life all around us

Post your comment
#Facebook messenger, #Instant messaging, #WhatsApp, #Conversations
The views and opinions expressed in this article are those of the authors and do not necessarily reflect the official policy or position of DailyO.in or the India Today Group. The writers are solely responsible for any claims arising out of the contents of this article.