Let's get real before we can say let's talk about depression

We need to see that insanity or a 'sound mind' exists as much in an individual with mental health conditions as any other person.

World Health Day 2017 was dedicated to talking about depression. And only few days later, another person has lost the battle against the condition. Pooja Vardhan, a BPO employee, mother and wife, jumped off the seventh floor of her office building, succumbing to her injuries shortly after. She is said to have been suffering from depression.

This is probably one of the many suicides in a short period since World Health Day given that India has the highest number of suicides in the world (as per a WHO report, 2012).

According to NCRB data, in India, approximately 15 lives are lost to suicide every hour (as of 2012).

There is no debate that awareness is key and that it's important to talk about depression, but can we really walk the talk when it comes to seeking help and support for this debilitating condition?

Here are some aspects of depression that make it particularly hard to talk about it:

1) To others, it seems like lethargy or a lack of will

Depression is not just difficult for the sufferer, it also has an impact on those around the affected.

While many will tell you depression is excessive sadness, in truth it is a lack of feeling anything at all except a darkness and apathy to life itself. Depression is like a death energy seeping into your bones. Everything that you take for granted including waking up in the morning and enjoying a cup of coffee is tiring work for the depressed.

To the untrained, this is unfathomable and feels like laziness or a lack of will. People are often quick to give up on you and leave you to your own devices.

2) It doesn't help that you are irritable

When you add irritability to this mix thanks to your constant buddy, fatigue, you end up repelling a lot of people. And that's a bummer because anyone who battles depression knows that one can't do it without enough emotional support. 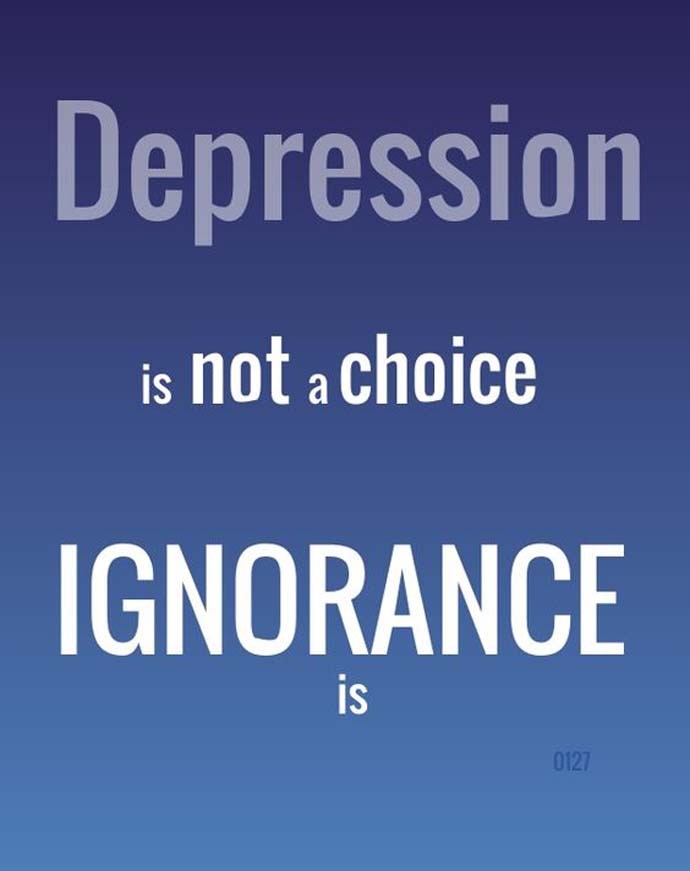 Yet, the company of people is extremely draining because the burden of expectations in relationships is too much to carry.

3) You wear a mask to office

From movies to social media to people figuring out ways to enjoy life, there is an undue pressure to be happy. In a society that places much importance on being happy and productive, that shuns sadness - a perfectly constructive and refined feeling - if you're depressed, you'll quickly learn to don a mask.

If they can't even accept sadness as a normal feeling, depression would be beyond acceptable. The mask helps you blend in and more importantly, fit in.

But like every other mask, you are hiding. It becomes a habit that you master, which, over a period of time, will take a toll on you. For how long can you lie to yourself?

4) Your mask is your saviour

At work, your mask is your biggest saviour. One of the greatest stoppers to talking about your condition is that you will be sidelined or blamed for your condition.

Even other people's mistakes may be ascribed to you because you supposedly don't have a sound mind. This may be far from the truth, but who cares?

You may not be considered for promotions or treated as a serious employee who has long-term career aspirations.

The mask, therefore, must stay. It is a semblance of normalcy for you and those around you.

None of these thoughts would run through your mind if you had a broken leg or diabetes mellitus. But that's just the complexity of mental health. It is such that the stigma is in the mind of the sufferer as well as others.

What it would really take for the stigma to be uprooted is for us to understand that insanity or a "sound mind" exists as much in an individual with mental health conditions as any other person deemed "normal", and also impress this upon sufferers of the condition.

Until then, we will have about five crore and counting Indians living with depression, wearing a mask and going through the motions of a dual life - living a lie, if you can call it living.

What is brave? Living like this or quitting? One can't say, but what is certain is that suicide is a colossal loss of a life and all that it could have been.

Also read: Why suicide isn’t an act of cowardice

Post your comment
#World Health Day, #Mental Health, #Suicide, #Depression
The views and opinions expressed in this article are those of the authors and do not necessarily reflect the official policy or position of DailyO.in or the India Today Group. The writers are solely responsible for any claims arising out of the contents of this article.