Halal vs Jhatka: The day I saw a goat killed decided the debate for me

With Bakr Eid around the corner, the jhatka meat vs halal debate is bound to come to the fore. I know which meat will meet my expectations.

A rose by any other name may smell just as sweet — but the same does not hold true for mutton and chicken.

With Bakr Eid around the corner, there are bound to be many pro-vegan, dissenting voices that will point out issues of animal cruelty and such like about the slaughter it will involve. And, once again, we will revisit the annual tradition of comparing jhatka and halal-style meats, especially since some people are observing 'Shravan' and going sans meat altogether, so naturally, both tempers (and tastebuds) are frayed.

This debate is not new to me. From ‘Jhatka is a more humane way of eating meat’ to ‘Halal meat contains no toxins’— it is something I have heard often enough and not really bothered about.

I thought that since you cannot really ask your meat if it wants to be blessed and killed suavely or if it want to go out with a bang, any discussion on this issue is pointless.

After all, a certain fried chicken from Kentucky would taste just as delicious, right?

Well, all that turned on its heel the day I witnessed a halal butchering in a little village in Karnataka. Fried chicken is as delicious, whether halal or jhatka. Right? (Photo: Facebook/KFC)

It all happened when I spent a week in Jageri village in Kollegal Taluka of Karnataka in 2010, to complete a post-graduate thesis project. Undeveloped, untouched, Jageri was beautiful but a daunting place for a cub-reporter-in-the-making because there was literally nothing dramatic enough to become a thesis subject.

There was a church, a school, I think, a few huts, and the rest were all sprawling fields flanked by mountains. It was always deathly silent, not the morbid kind, but just the absence of any sound — the kind you’d imagine if you were the only survivor of an apocalypse.

With the thesis deadline approaching though, I was frantically scouring the length and breadth of the village for a subject worthy of getting at least a C+ grade on my work (Spoiler: I got a B). During one such agitated search, I found myself at a dargah where some sort of festivity was afoot. 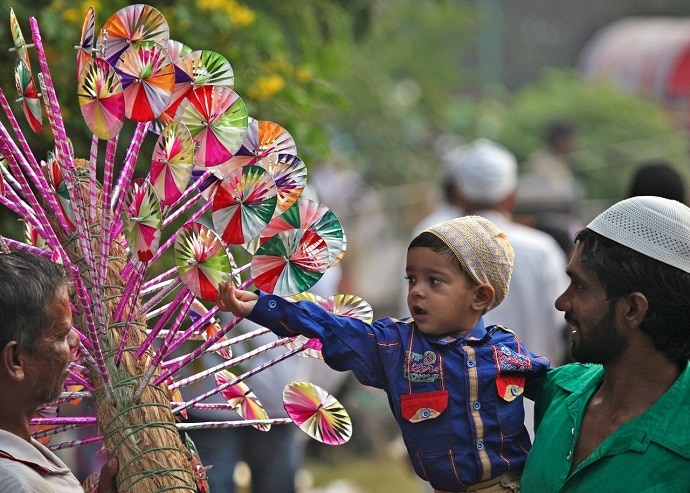 Getting festive: Children are the first to observe what's happening. (Photo: Reuters)

Girls in oversized frilly dresses, little boys in pants with the cuffs rolled up so high that they looked like a pair of shorts... even though there were about 10-15 people, it was the first time I had seen so many people at a time in Jageri.

And then, there was a gorgeous, shiny black creature with eyes the colour of the setting sun.

I couldn’t really look away — and I wished I would have.

I inched a little closer to the shiny black goat with unusual slit-like pupils —  and I realised that it was actually lying on the mud floor.

Finding that strange, I moved closer and saw a hand pinning the creature to the floor by its throat.

Another step closer and a knife appears, smoothly slicing the neck of the goat with beautiful eyes. With a dull fizz, the blood starts streaming down on the floor— first with a gush, then calmly trickling.

All the while, I could not break eye contact with the goat till it was very much dead.

Even then, the goat looked so calm and peaceful while I was left feeling unsettled. Eyes like the setting sun: I wished I'd looked away. (Photo: Reuters)

This was drastically different than the jhatka slaughterings that I had witnessed so far. The chicken is quickly beheaded, thrown in a cauldron where it proceeds to violently move for a few seconds, and then everything goes deathly still. The butcher retrieves the headless, lifeless chicken, proceeds to pluck the feathers and chops it into nice little pieces for your curry.

That seems more humane and organic to me.

Just like nature intended, in fact, because when a tiger catches its prey in the jungle, it swiftly renders it lifeless, with a quick bite in the throat to crush the windpipe.

Killing in the name of food is not about decorating the animal in bright colours, blessing it, then slowly slicing open its neck and letting blood seep out of its still alive body. That's incredibly cruel. And just unnecessary theatrics.

Didn't our mothers tell us not to play around with food?

#Eid dishes, #Uyghurs muslims, #China mosques, #Zomato
The views and opinions expressed in this article are those of the authors and do not necessarily reflect the official policy or position of DailyO.in or the India Today Group. The writers are solely responsible for any claims arising out of the contents of this article.