What we can learn from women who shaped ancient India

We must realise the grand heritage women inherit and the complementary role they play along with men.

The history of the world has been biased towards men but there is ample evidence of the immense contribution of women in various disciplines. Starting from the earliest scriptures of India all through our classical and pre-colonial history, we see how women have played a vital role in shaping our civilisation and our country. Compared to the rest of the world, historically, India seems to have been far more open-minded and compassionate towards women and their status in society.

The legacy of women

A favourite platitude of our times is: “Look at how women are advancing in today’s world! They are excelling in all fields and standing equal with men.” While there is much truth in this declaration, it suggests that for the past several thousand years, women have done nothing worthwhile and have suddenly come out of hibernation in the 20th century. This, as we know, is wholly untrue.

In the Rigveda Samhita, the oldest treatise known to us, we find many hymns composed by rishikas (women poet-sages). In fact, the mantras that are chanted at every Hindu wedding (from Rigveda Samhita 10.85) were composed by Suryā Sāvitrī. Here are a couple of sparkling verses from that poem:

When Suryā went to her husband,

Thought was her pillow

Sight was the kohl in her eyes

When Suryā went to her husband’s home,

The Sky became her shawl,

Sun and Moon became the oxen.

In the Upanishads, we find philosophers like Maitreyi and Gargi engaging in discussions and public debates (for example, see Brihadaranyaka Upanishad 2.4). In the Puranas, Itihasas, Smritis, and later texts, there are several references to the brilliance, fortitude, eloquence, and resourcefulness of women. In the classical and pre-colonial eras, we find women rulers, ministers, saints, poets, bodyguards, dancers, mathematicians, teachers, spies, philosophers, and musicians. 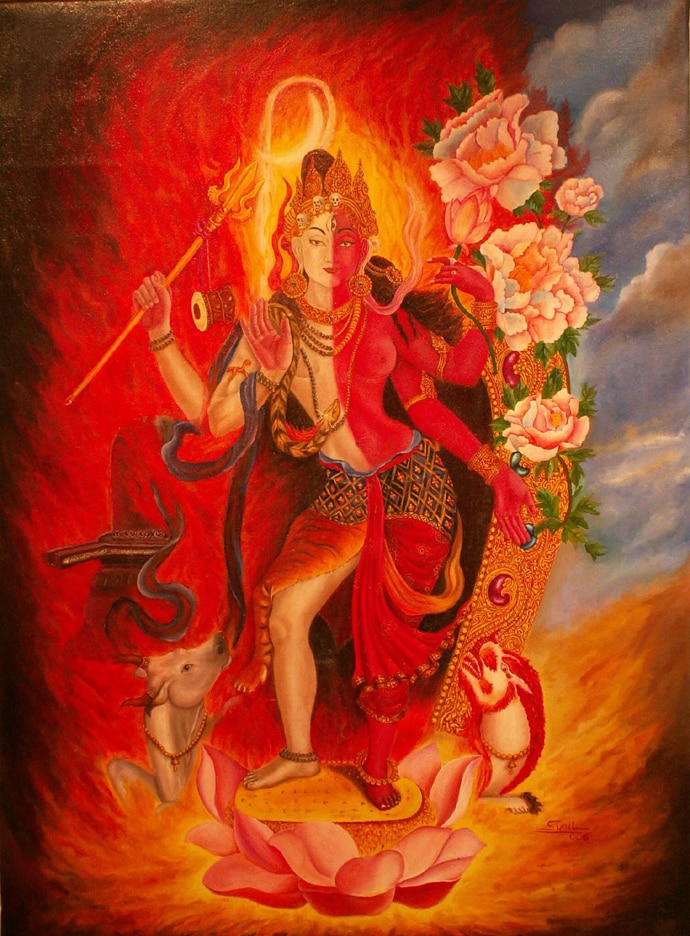 Not only do we find examples of women contributing to every field, but we also know that they enjoyed much freedom. There is a conversation between Pandu and Kunti in the Sambhava Parva of the Mahabharata (in Book 1/Adi Parva).

Pandu was cursed to die the moment he had sex. But he wanted to have children to take the lineage forward. So he tries to convince Kunti to seek another source to beget a child (Remember, Pandu himself was not born to his legal father, but to the sage Vyasa). When Kunti protests, Pandu recalls the ancient period where men and women had equal sexual freedom and their having sex outside of marriage was not considered to be outside the purview of dharma.

He even mentions that such practices were prevalent among the Kurus in the North at that time. While this is merely a stray example, we find that even our so-called radical ideas of modern times have had some place in ancient stories.

From the earliest days, women and men worked together to procure food. They also worked together in their chosen profession. If they were farmers, the woman might sow the seeds while the man might plough. If the woman harvested, the man would clean the grains. If the man did the packing, the woman sold it in the market (For example, see Rigveda Samhita 8.31 which describes a couple working together, procuring materials for ritual and doing household chores).

The ancient people seem to have understood without exception that men and women are complementary to each other. It is pointless trying to figure out if the lyric is more essential than the melody; what we do know is that a song is incomplete without the words and the tune.

In the guise of "men and women are equal", an unhealthy competition has crept into our psyche today. While men and women indeed have most things in common, we are also different – physically, emotionally, and mentally. Why has this become such a big problem? In fact, it is our differences that make us valuable to each other. We should recognise and embrace these differences. If men and women are equal, the distinction becomes superfluous and diversity goes out of the window.

That said we must never lose sight of what we have in common. In 1832, Samuel Taylor Coleridge wrote, “A great mind must be androgynous.” Commenting on this, Virginia Woolf said, “Perhaps a mind that is purely masculine cannot create, any more than a mind that is purely feminine... the androgynous mind is resonant and porous... it transmits emotion without impediment... it is naturally creative, incandescent and undivided.”

Read: Who was Rani Padmini? Should Padmavati - a historical epic be open to reinterpretation?

Another concept in the Vedas, purusha, shows the transcendence of gender (for example, see Rigveda Samhita 10.90). While the word purusha means "man" or "male" in common parlance, the etymology of the word (puri shete iti purusha) shows clearly that it refers to "one who dwells in the body", that is, human consciousness. This consciousness transcends the distinctions of gender and brings us to a realm of our true nature, which is beyond form and attributes.

The sad reality today is that many women are subject to untold miseries in India (and the world over). One form of empowerment is for them to realise the grand heritage they inherit and the complementary role they play along with men. Needless to say, men too will be empowered by this awareness.

In preparing this article, I’ve drawn freely from my discussions with Shatavadhani Dr R Ganesh. Those interested in knowing more about the high status of women during the Vedic period may refer to Shakuntala Rao Shastri’s Women in the Vedic Age (Bombay: Bharatiya Vidya Bhavan, 1954)

Post your comment
#Hinduism, #Rig Veda
The views and opinions expressed in this article are those of the authors and do not necessarily reflect the official policy or position of DailyO.in or the India Today Group. The writers are solely responsible for any claims arising out of the contents of this article.

The writer is a musician with a deep interest in Hindu scriptures, South Indian classical music, and education. He is the co-author of The New Bhagavad Gita. He is presently working on a translation of selected Vedic hymns for the modern reader.