The Quran emphasises moderation and balance in all matters related to faith, religious practices and social responsibilities.

There is an authentic saying attributed to the Prophet Muhammad: "Religion is very easy and whoever overburdens himself in his religion will not be able to continue in that way. So you should not be extremists, but try to be near to perfection and receive the good tidings that you will be rewarded." (Bukhari Fath-ul-Bari, Page 102, Vol 1)

In the above hadith or prophetic saying, religion refers to the broader notion of Islam, that is deen, a complete code which encompasses every facet of human life. Deen comprises imaan (faith), Islam (practice) and ihsan (a sense of social responsibility borne out of religious convictions).

Islam emphasises moderation and balance in all matters related to faith, religious practices and social responsibilities. This universal principle is basically enshrined in the holy Quran: "And God has not laid upon you any hardship in matters of religion" (Q 22:78)

God intends for you ease.

The Quran reads: "God intends for you ease and does not intend for you hardship." (Q 2:185) The Quran reinforces this message again: "God does not burden a soul beyond its capacity." (Q 2:286)

A unique feature about the Quran is that while it spells out an ethical code, a moral path, a political system, a social norm, an economic order and a legal philosophy, it also presents in the life of Prophet Mohammad the practical exposition of the theoretical models contained in it.

There is hardly any aspect of life which has not been touched upon by the Quran; and in a similar vein the Prophet’s life penetrates with remarkable versatility every domain of human life, both public and private.

This striking parallelism between the message of the Quran and the life of Prophet Muhammad clearly indicates that it was to illustrate beyond doubt for every follower of Quran that the pattern of life enunciated in the holy book is capable of being practiced by every individual. 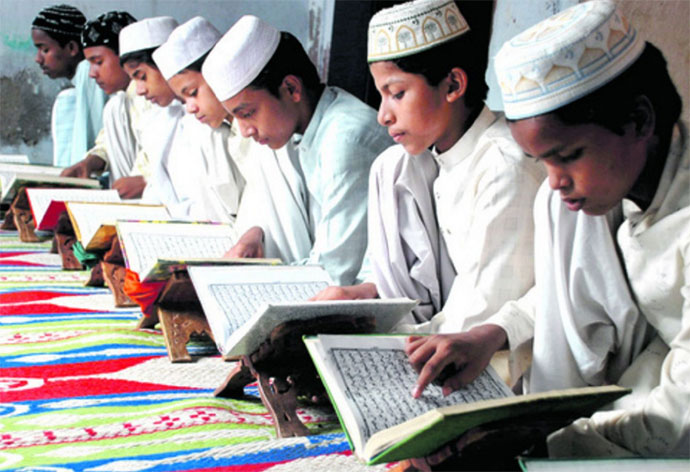 The Prophet was, in fact, a human incarnation of the Quran. For what we find a wonderful philosophy in the static words of the Quran, we have a dynamic living counterpart in the life of Prophet Muhammad.

The Prophet once told  his close companion Abdullah ibn Amr: "Have I heard right that you fast everyday and stand in prayer all night?" Abdullah replied: "Yes, O Messenger of God."

While enjoining his followers to prepare themselves for the life hereafter, the Prophet also admonished them to perform the necessary functions which an individual is called upon to do in order to live a proper life in this world.

The Prophet believed that an ideal life was one which had the right combination of both the essential elements of life: one that which could enable him to lead a proper and contented life on earth; the other which could provide salvation to him.

"For a prudent person it is necessary that he should have some moments;

Moments when he should commune with God,

Moments when he should be reflecting over the mysteries of creation,

And also moments spared for the acquisition of the wherewithal"

In other words, a faithful servant of God must apportion his time in such a manner that a part of it is spent in communing with God through prayers; a part is spent in making a self audit of oneself; a part in reflecting over the mysteries of creation by seeking knowledge of the various secrets in nature; and a part in acquiring the necessary wherewithal for fulfilling one’s needs.

The Quran spells out a life which is a harmonious blend of the otherworldly and mundane aspects. The synthesis is attempted in such a manner that both these aspects are so organically related that the one gives meaning and content to the other.

The Quran recognises two basic obligations of an individual: one to God and the other to society. Islam does not approve of asceticism and a life of self-denial.

The Quran also disapproves the other extreme of lifestyle - luxurious and pleasure-seeking. It calls for moderation in all activities so that a complete and fuller life can be achieved. The Prophet himself was very practical in his approach and in his guidance to his companions.

Once the Prophet saw a wretched, ugly man with torn clothes. He asked the man the reason for his pitiable state. The man replied: "O Messenger of God, I prefer giving all in charity, contenting myself with this shabby dress." The Prophet exclaimed in disapproval: "Not like that; God likes to see the traces of his benefit on his slave!"

The Quran enjoins: "O children of Adam! Wear your beautiful apparel at every time and place of prayer, eat and drink but waste not by excess, for Allah loves not wasters. Say: ‘who has forbidden the beautiful gifts of Allah which He has produced for His servants and the things clean and pure which He has provided for sustenance." (Q7:31-32)

It is the human predilection for riches that the Quran cautions against and exhorts us to maintain balance between extravagance and parsimony. This is in recognition of human nature, which has the dual impulses of compassion and an inherent love of wealth.

The balance between the body and spirit, between personal and civic responsibilities, and between spirituality and the mundane affairs of life is a wonderful guidance bequeathed by Islam to humanity.

The Quran goes further and explains that a perfect model of religious life is not one which is based on mere performance of the rituals. It has to also take into account the duties incumbent on an individual in his relationship with the community from which he draws sustenance.

In today’s strife torn world wth its bewildering challenges, there is no better guiding wisdom than what the Prophet told his companions:

"You live in such a time that if any of you abandon even a tenth of what you are enjoined, you will be ruined. But a time will come when, if a person fulfills only a tenth of what is enjoined, they will be saved." (Tirmidhi, Book 34: Fitan (Sedition), Section 79, No. 2267)

#Prophet Muhammad, #Muslims, #Islam
The views and opinions expressed in this article are those of the authors and do not necessarily reflect the official policy or position of DailyO.in or the India Today Group. The writers are solely responsible for any claims arising out of the contents of this article.