Kathua Rape Case: The verdict punishes the accused. But we have let down the little victim of this horrific crime

The Kathua gang-rape and murder case was appalling enough in its brutal hate. But our behaviour as a society since has been shocking and disturbing as well.

The verdict of the Kathua abduction, gang-rape and murder of an eight-year-old girl has been announced. Justice has finally been served.

Thankfully, the trial in this case was fast tracked — but the entire period of the 18 months, since the crime took place, is an indicator that it wasn’t just another case of sexual violence. It also put a mirror before our eyes, which exposed the ugly truth of society and showed us how we had failed the young girl at various levels.

The young girl belonged to the poor nomadic Bakerwal community, one of the most oppressed social groups in Jammu and Kashmir. She was an ordinary girl who would go out to play, help her mother with household chores and graze their cattle. Her only fault, perhaps, was her identity and her name. The primary motive of the entire crime as detailed by the investigations was to drive out her community from the village. It was the hate against a group that drove these people to commit such a monstrosity. This innocent girl became a target in their ugly scheme of instilling fear among her people. And the manner in which she was brutalised tells us about the extent these people were blinded by hatred.

I think the girl was wronged by so many people in her own society at many levels.

On January 10, when she went missing from Rasana village in Kathua district of Jammu and Kashmir, she had taken the horses out. A week later, her body was found with bite marks on her face not very far away from her house. She would often go and play in the same neighbourhood where she was kidnapped; she could never have imagined that some of her own neighbours would lay the trap. The policemen who were supposed to be her saviours turned out to be helping the predators; they did their best to hide the crime and in fact aided it. The civil society members in the area, who should have been up in arms, seeking justice for her, took out marches in support of her tormentors.

If this wasn’t enough, the leaders and ministers who took an oath to work for common citizens like her were seen sharing dais in those rallies. 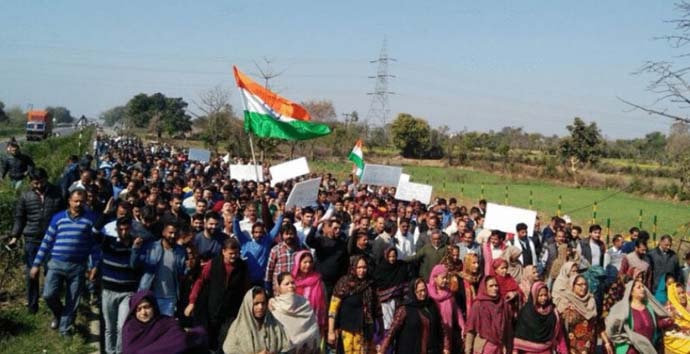 The horror of the Kathua crime has been exacerbated by the support the accused got. (Photo: Twitter)

To me, the biggest shame was when the tri-color of her country was being used to justify or shield her violators.

The charge-sheet in the case filed by the Crime Branch offers a horrifying account of how she was confined to the store-room of the local temple, drugged many times and repeatedly raped, before she was strangled to death. The criminals in this case left no stone unturned to use religion as a tool to save themselves. The fact that she was abducted and kept in a religious place is a terrible shocker. Even the Gods themselves would never forgive them for such an act — but, blinded with hate, many of us humans actually didn’t see that.

They perhaps, saw the name of the girl and simply forgot the rest.

It baffles one to see that a nation which had witnessed the horror of Nirbhaya not so long ago still had people behaving in such a manner.

But this is an ugly truth which will plague us for a long time now.

The images of those rallies organised to shield the perpetrators will be pasted on our conscience for a long time — so will be the fact that some of us fell into the trap of vultures whose only aim is always to see their agendas being peddled while dividing people. In an ideal society, such crimes should cause shudders in one and all, irrespective of the identity of the victim or the accused.

But clearly, we aren’t an ideal civil society yet.

The judgment in the case has been delivered — but we failed that little girl.

The Kathua case may have happened years after the Nirbhaya case, but the dark underbelly of our society has been exposed once again. Not that it would matter much to these innocent souls, but perhaps, we should hang our heads in shame and say sorry.

Also Read: The Kathua Case: Why the Kathua gang-rape and murder verdict is no reason to celebrate

#Asifa bano rape case, #Kathua rape case, #Kathua rape case verdict, #Asifa bano verdict
The views and opinions expressed in this article are those of the authors and do not necessarily reflect the official policy or position of DailyO.in or the India Today Group. The writers are solely responsible for any claims arising out of the contents of this article.