Love, sex and marriage: Conversations with a polyamorist

The intention is having an emotional connection, even if it's a brief encounter.

About a month ago, a friend of my girlfriend was visiting from Mumbai and decided to spend a few days at her place. Among our friends - some of whom who had met her before - there was a considerable anticipation about her stay. It was only once that she had arrived in Delhi, and when I got talking to her, I realised, what the fuss was about.

Mimi is a tall, dusky, attractive girl in her mid 30s. She's vivacious and spirited and loves to engage in deep, meaningful conversations. From our first encounter, I gathered, she's been a model and a television actress. She loves to read, is into fitness, and is also toying with the idea of being a writer.

Mimi was in town to attend a literary festival and hobnob with people from the media for a project she's working on.

We regroup later that evening at a club in the heart of the city to celebrate a friend's birthday. After a few rounds of drinks, while our friends are beginning to veer towards the dance floor, Mimi tells me she's been married for more than seven years, but she's in a polyamorous relationship.

I notice Mimi has a strong and imposing air about her, which may have less to do with her physical frame. She has an innate ability to seem at ease when she's the centre of attention. She can also hold multiple conversations with her expressive eyes.

Before I have grasped the full meaning of her marital arrangement, she is quick to point out she and her husband are a fully committed couple. It is just that they are open to sexual relationships with others. Her husband, who at present is living in London, she says, even has a Spanish girlfriend. 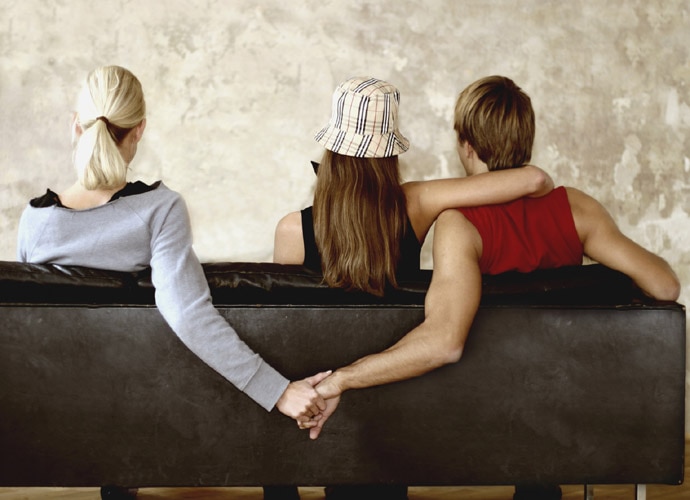 Mimi says her husband knew she was on a date the evening before.

I am suitably piqued by her revelation. I ask whether she would be keen to write about her experiences of being a polygamist for a website I edit.

At this point, she interjects to clarify; polyamorous, not polygamous - they are two very distinct concepts. The latter implies the legal marriage to more than one spouse at the same time, and the former is the practice of having deeply committed, loving relationships with more than one partner at the same time with the consent and knowledge of all the partners involved. Polyamoury can take many forms, and can include a sexual aspect or not. But the intention is having an emotional connection, even if it's a brief encounter.

The conversation at this point abruptly ends as friends interrupt us.

At the club we are in, about what seems like an hour later, I see Mimi has struck a friendship with a foreigner who was seated on the table next to us. The self-assured man is a tall, wiry, blond, who looks American from afar, and is clearly smitten by her. They are at the bar, while we're on the dance floor, letting our hair down, by now suitably inebriated by the copious amounts of alcohol we've mixed.

Also read - What India Today Sex Survey 2016 revealed to me

Despite our befuddled state, we notice them sharing numbers, kiss, and exchange deep, passionate embraces. After a while, I see the man leave, and she joins the rest of our party as though not much has passed.

I meet Mimi two days later since that evening. I learn in the meanwhile she has already spent a rather romantic evening with the man she met at the club. They, it turns out, decided to take things forward the very next day.

According to Mimi, they had a sumptuous dinner and a swim in the pool of the hotel he was staying at, devoured a hearty breakfast, connected over talk of family, politics, heartbreaks and hopes. They then parted (he was returning to New York, where he lives) with laughter and kiss on the lips. The intimacies shared over the night in its transience, and because of it, were imparted with sensual grace.

Mimi tells us that although she's in a polyamorous relationship, this has only been the sixth person she has had sex with apart from her husband. "For me," she says, "it is important to have an emotional connection with a person. It is almost never just about sex or lust as everyone would like to perceive."

While Mimi is talking, her phone begins to ring. It is her husband calling. She walks to another room and doesn't reappear for more than an hour.

"My husband and I," she says, "make it a point to talk to each other every day for at least an hour. We tell each other everything. We don't spare any details. Sometimes our conversations are intense. It is really quite wonderful." Mimi spends six months with her husband abroad and six months back at home.

Mimi says her husband knew she was on a date the evening before. "It is amazing how we can both tell every single time when the other is out with someone." Most times, she claims, they are "happy for each other", a concept polyamoury even has a term for, "compersion" (taking happiness in a partner's joy and relationships).

Their relationship, she says, was not polyamorous to begin with. It took a considerable amount of time for them to reach this level of trust and understanding. The journey was more a personal undertaking for her. It helped her come to terms with who she really was and confront a part of her fraught with vulnerability and social conventions. This exercise of the soul, she found, truly liberating.

"At first when we were opening ourselves to this idea of a polyamorous relationship, I was confused and even emotionally unsure how it made me feel when I would learn that my husband fancies someone, or had been with someone more attractive than me. But even that jealousy, I found, was healthy in a way. I was forced to deal with my insecurities - so that I could come to see the appreciation of another woman by my husband, as an acknowledgement to beauty or charm, rather than an indictment of myself."

Mimi says she had previously been in a year long, relationship with another person, someone she had met online and had been chatting with for months before they actually met.

"I find the idea of making personal connections both seductive as well as serendipitous. It's only when you form an intimate relationship with someone can you truly see them for who they really are. For me, the draw of polyamoury is about the ability and freedom to deeply love multiple people."

Mimi talks of her time when she spent months living in Croatia by herself. "The men there are extremely flirty, even the older ones." Although she formed many deep and moving relationships with the men and women she met during her stay, not one, she claims, did she decide to sleep with. "I didn't feel like I needed to."

She explains: "Today - we expect one person to be all things to us - our lover, our spouse, our confidant, our saviour, our friend, our intellectual stimulant, our therapist - how is that even possible? How can we impose so many expectations on one person without them falling short? I like different parts of my personality to be explored and supported by different people who can bring out all these aspects. Polyamoury allows that happen, so why not?"

As Mimi left for Mumbai, it took some time for her views to sink in.

My girlfriend met a friend over for dinner recently, and they discuss Mimi. "I'm so glad my husband didn't get a chance to meet her," the friend says. "I'm afraid he would want this kind of an arrangement for us."

(A version of this article first appeared here.)

#Love, #Relationships, #Marriage
The views and opinions expressed in this article are those of the authors and do not necessarily reflect the official policy or position of DailyO.in or the India Today Group. The writers are solely responsible for any claims arising out of the contents of this article.