Why it's important to educate a doctor's heart

While healing the sufferings of countless, it is pertinent that are protected from stressful situations.

Social and economic changes have changed work values and ethics today. There is a greater focus on remuneration, decline in conscientiousness and a failure of self-regulation across professions. The medical profession is not distanced from this. This is both a concern and a ticking time bomb. In a study done in a medical college in Delhi, 53.6 per cent students reported suicidal ideation. Suicidal death, double the rate in doctors when compared to general population is an extreme example cited, but in medical education, do we deal with feelings, emotions, values, mindsets, personal and professional development, all of which can help have a meaningful, satisfying and fulfilling career of a doctor? The answer is in a resounding and alarming negative.

Education addresses three domains - cognitive, psychomotor and affective, also known as the head, hand and heart respectively. While medical education in India deals greatly with the head and meagerly with the hand, it nearly neglects the heart. As much as it is essential to reform curricula to make changes in the cognitive domain, and to lay greater emphasis on skills, it is imperative to teach to the affective domain or the "heart", the hearts of the fifty-thousand odd young MBBS students in India.

The affective domain entails the manner in which one deals with things emotionally, such as feelings, values, appreciation, enthusiasms, motivations, attitudes, including the nurturing of desirable attitudes for personal and professional development. Doctors deal with human beings, and a lot of them in India, where doctor-patient ratio is an abysmal 1:2000. The working conditions are often not ideal with long hours of work, early burnout, and harassment by seniors being common stressors. In the absence of addressing the affective domain the current format does not support an individual to handle these stressors, which often lead to professional dissatisfaction which manifests in various negative forms.

Teaching the head is convenient, and a medical curriculum spends the maximum time doing it. With a list of textbook under "prescribed" and "recommended" list, scores of "teacher notes", handouts and PowerPoint presentations, content delivery in a traditional curriculum is done literally for thousands of hours in any medical school. Teaching the hand is less convenient. Imparting psychomotor skills often plagued by the lack of infrastructure and mired in a curriculum that has stayed in the past, is given cursory importance. Teaching to the heart has however been a tricky concept. Assumption that a teacher cannot change a student's basic personality or inner motivations has been one of the primary reasons why affective education has been traditionally avoided.

Doctors practice their profession in a large social context and hence working understanding of democracy, justice, equality, honesty, religions and behaviours will go a long way in both understanding and addressing complex healthcare issues. The appreciation of social roles, group behaviour, ethnic, cultural and religious differences needs to be included in health professional education.

Teaching medical ethics as a part of teaching the affective domain has been widely undertaken. But it is being realised that only remaining within boundaries of ethical code does not ensure application of knowledge and skill. Dealing with patient and their relatives need a practitioner to understand their own value system, value orientation of others and then make clinical decisions under the purview of delineated ethical values. This can be achieved by teaching how to differentiate between ideas, how to respond, how to support, how to debate in support of one's values, how to formulate a viewpoint, how to manage in accordance to values, and such skills.

How can it be achieved?

Five categories of the affective domain, from lower to higher order, proposed by DR Krathwohl, whose pioneer work remains the cornerstone till this day, are:

i) Receiving (to be aware of a situation, to be able to be selectively attentive)

ii) Responding to (to actively participate)

iii) Valuing (to accept, to commit)

Teaching the heart has to be progressively done through the four years of MBBS and through these five steps which are aligned as a pyramid with receiving at the bottom and internalising at the top. 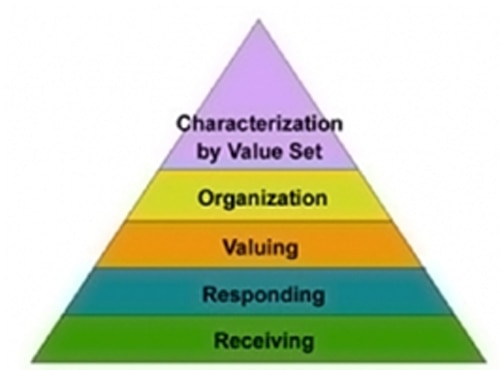 Realistic case studies graduating from less complex moral dilemmas to intense ethical and moral dilemma can be used. Imparting communication skills from first-year to final-year MBBS and inclusion of literature and writing which focus on emotive and cognitive dimensions have shown to enhance empathy, a component of the affective domain. Reflective writing exercises, attending and participating theatrical performances are techniques that help enhancing emotional quotient amidst grueling curriculums, peer pressure, social demands, all of it at an age that generates more questions than answers. A crucial step however is to train the teacher adequately in machinations of teaching to the "heart".

In its effort to move to competency-based medical education, MCI has introduced ATCOM (Attitudinal and Communication Competencies Module) since this academic year. In realising that traditional role modelling and mentoring does not address the needs of the teenager who enters a medical school it is a welcome step. However one can only be sceptical of its fruition given the pathetic capacity in medical colleges in India. Until there is capacity building to build such competency, wide range of efforts such as lectures by professionals on psychology, ethics, demands of the job; competitions for reflective writing essays, theatre performances, teaching communication, conflict management and other interpersonal skills, will help.

Negative response to crisis or stress, competitive nature of jobs, burnout, are some of the causes of suicide, which is on a rise in white-collar workers. Suicide rate among doctors is higher than normal and it is undeniably a multilayered issue often concerned with depression, easy availability of drugs, among other causes, but it is preventable. While suicide is just an example and an extreme one at that, solution to myriad such issues lie right in the curriculum that shapes a doctor.

Educational paradigm, in medicine certainly, is shifting from being teacher centric to student centric. Thus when the shift is towards students who learn on their own in a medical practise, who work in team, for long hours, in difficult and stressful workplaces, while healing the sufferings of countless, it is pertinent to have their "heart in the right place", in this case a euphemism for appropriate affective education.

The writer is a teacher at Manipal University.