Seen the No Sleepover viral video? Here are 11 unpopular parenting patterns we can do without

A video by a mom on no sleepovers for her kids is going viral, and goes without saying, raising questions about the difference between parenting and control.

A mom named Tara Huck recently started a big debate when she shared a clip of her "Unpopular Parenting Opinions" on TikTok and Instagram. As per her viral video,

WHY DID SHE DO THIS?

Tara Huck had heard stories and discussions which led her to research on potential dangers at other people's home. The danger list consists of weapon safety, drugs, assault, alcohol and bullying. So this rule was a small act to eliminate "one very small factor" that could POTENTIALLY harm her children.

SO, WHAT WAS THE DEBATE ABOUT??

Her rule of "No Sleepovers" started generating a LOOOTT of conversations. While her Instagram followers (a lot of whom must obviously be fellow parents with teen kids) agreed to her conduct of not allowing sleepovers, everyone else seemed to have the exact opposite view.

While many parents and her followers agreed with this approach, their concerns sounded like this: But there were many who were shocked at this approach. This is what their concerns sounded like:

Worrying about their kids is known to be the full-time job for many Indian parents, lol. Mohabattein and Kabhi Khushi Kabhie Gham showed it, Kyuki Saas Bhi Kabhi Bahu Thi showed it and like which show doesn't show it? And truth be told, it's often difficult to distinguish between control and parenting.

Why? Many of our parents have grown up with parents who had orthodox beliefs that could not be questioned. Jaisa bola waise karo, nahi to thappad lagega. So they have spent most of their life being comfortable with patriarchal rules and since this is what they have grown up with, they naturally tend to expect the same from the next generation.

But now with the world changing at the speed of lightning, one questions if these rules are even relevant anymore? Do traditional parenting rules make sense any more? Or do they cause more harm?

Here are some instances where we feel Indian parents can do better:

1. They can look at children who are well into their adulthood as matured adults who can make their own decisions. Children's liberty to take their own decisions should be considered a good way to be independent. It cannot be considered as "bad" or taunted as "bahut bade ho gaye ho tum". Children have a choice to take the guidance of elders, and not taking it should not be seen as offensive nor be taken as an opportunity to control them.

2. Sometimes parents ONLY look at their children as a part of their family prestige instead of also seeing them as persons with their own individuality. Restricting their expression to certain "decent" clothes, behaviour to that of a certain 'good girl' are not appreciated.

3. When children are expected to be different and stand out of the crowd but are questioned on their different decisions and actions, this becomes a confusing irony. Parents at times expect children to decide as per what they think the society expects, wants and will accept. Or else “muh dikhane ke layak nahi rakha" is the general line dropped as a a statement of non-acceptance which just shows that cultural and moral values matter more than personal growth and expression. This should change.

4. Which kid has not been slapped in the name of discipline? Old beliefs that "physical hitting and spanking is the only way to discipline your kids" has done more damage than improvement as mental health issues that arise due to this are completely ignored. Daant me pyaar nahi hota hai bhaaai. (Something similar recently got even Union Women and Child Minister Smriti Irani in trouble, you know.)

5. Comparison to other kids (hi there, Sharma ji Ka Beta) and cousins for every other different choice made, makes kids feel inadequate and unworthy and doesn't motivate them to do better. Definitely something to drop. Kids feel worse when parents compare their life with that of other kids and make it all about them. Instead just listen without opinions na?

6. Some Indian parents don't see the need for kids to have any sense of privacy. Doors and phones cannot be locked and taboo issues are avoided by control, strictness and avoidance instead of accepting and addressing it. This ensures that children avoid talking the truth to their families because sach bataya to daant ke phone leke jaaoge. 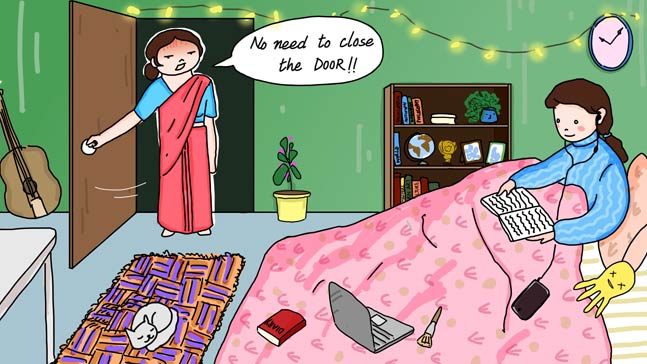 7. Kids are often completely unprepared for the real world but are told to focus on academics. Important discussions around consent, work-life balance, work ethics, periods, mental health are not had. But marks kam aaye to 10 din tak discussion chalta hai.

8. Indian families generally have no sense of healthy boundaries and having a self-sacrificial approach is often looked up to, even though it does not help anyone.

9. A lot of unacceptable things are normalised: fat shaming, slut shaming, career shaming, homophobia. And transphobia. Also real problems that are real to children are dismissed as 'fake', and many times, parents also shrug it off with "ye sab ke liye tumhari umr nahi hai". How will children feel accepted when the closest ones don't even try?

10. Parents look for a certain caste and religion for marriage, because it "shows culture and status". Yes, even in 2021 (and will probably continue into 2022 and long after that).

11. Children are controlled, manipulated and blackmailed in the name of "log kya kahenge". And that doesn't seem like a good way forward.

What do you think? Is this good parenting or does this look like control?

#Growing up, #Toxic, #Indian parenting
The views and opinions expressed in this article are those of the authors and do not necessarily reflect the official policy or position of DailyO.in or the India Today Group. The writers are solely responsible for any claims arising out of the contents of this article.