Best Friends Forever: Not yet another 'friends till death do us apart' story

This friendship made me realise, age is just a number when your friendship ages like fine wine.

It's not every day that two people get the opportunity to say happy birthday at the age of 82.

I was saddened to hear some days ago that my mother's best friend passed away. But more than that, I was awestruck to know that they had been best friends for 83 years and shared the same first name too – Joyce.

I'm keeping the best for last, so what you would read later will truly touch your heart. Let us begin the glorious tale of two lives lived to the fullest, with lots of love.

Joyce Siromoni (JS) met Joyce Prabhakar (JP) at the Christian Medical College in Vellore where they both joined to study medicine. I still don't quite understand how two such completely divergent personalities could actually become friends. 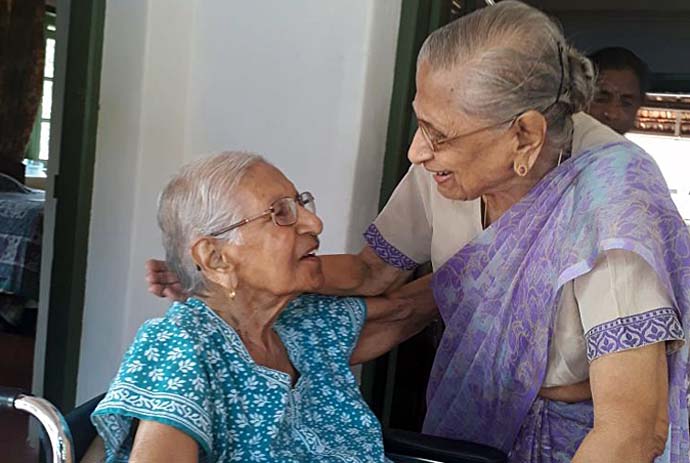 JS and JP met in college to form a friendship that would last 83 years. (Photo: Author)

JS was a teetotaler, quiet, composed, no-parties-no booze person while JP was just the opposite. She loved her card parties at the Bangalore Club, danced all night, smoked and drank her head off, and was as loud as a blaring truck horn who wouldn’t sit still for a second.

JP was the rich one among the two. She drove a yellow Range Rover, liked dressing up and looked a proper stunner. Meanwhile, JS was a simpleton, who did not even bother to put on makeup and loved her crisp cotton saris. JP used to literally swing past the house and kidnap JS ever time she went to play cards at the Bangalore Club.

I always wondered what on earth my mom was doing with this crazy women and how she fit into JP’s high-flying world of the rich, considering she did not drink anything apart from coffee. But I guess in a way both of them lived vicariously through the other and it must have been quite an amusing friendship as both of them would have something different to share with each other. Now I wonder why people tend to be friends with people who are similar to them... how boring would that be!

For years they stuck together, shared good, bad and ugly times. It was amazing to see how steadfast their friendship was. Even after getting married, having children, balancing a hectic social and work life, they were always there for each other.

Last year, in 2018, my mom Joyce Siromoni was diagnosed with second stage cancer. Being a doctor herself she decided against any kind of treatment since at her age it would not make any difference to her disease. It took me a lot of courage to actually speak to her about her own funeral ceremony, as well as her last wish. The chat thankfully went well and her last wish was to meet her best friend, Joyce Prabhakar.

JP by now had moved out of Bengaluru and retired at her coffee estate in a quaint little hill station called Chikmagalur, a six-hour-long drive from Bengaluru. JP was facing all the problems of old age and could not travel any more. JS too was in quite a bad shape as the cancer was spreading in her body and she was in extreme pain even though she managed to walk around a bit.

The trip to Chikmagalur Fighting cancer and old age, the two friends met up in the quaint hill station of Chikmagalur. (Photo: Wikimedia)

With doctors refusing to allow JS to travel it was a tough decision. Finally, the doctor said that JS can only travel by air for an hour-long journey as anything more than that would require her to carry an oxygen cylinder. From Chennai it was going to be a 45min flight, so we decided to go and even though the long drive from the airport to the hills was a killer, JS did not let up even for a moment.

The two looked like two school girls catching up, and considering the best friends were meeting after years, yet it seemed that nothing had changed. They spent a few days together and every evening, JP, who was still the same old crazy lady she used to be, would have her whisky time at 6 pm and the two would sit on the porch overlooking the valley, one with a glass of whisky and the other with a mug of coffee.

On January 2019, Joyce Siromoni passed away peacefully and a few months later, on May 17, we got to hear that Joyce Prabhakar had gone to her maker too.

I received the news while I was in a metro on my way to work, so, I had to hold back my tears but more than that, I realised that these two women lived the true spirit of friendship, literally, till death did them apart.

Also read: Maoism or my baby: A mother’s desperate dilemma in insurgency-hit Chhattisgarh

Post your comment
#Relationship, #Friendship, #Bengaluru, #Chikmagalur
The views and opinions expressed in this article are those of the authors and do not necessarily reflect the official policy or position of DailyO.in or the India Today Group. The writers are solely responsible for any claims arising out of the contents of this article.

A graphic designer by profession, have dabbled in advertising, print, IT and now enjoying the chaos of media