6 unlucky people who got arrested at a wedding (imagine if it happened at your shaadi!)

While a bride added marijuana to the wedding food, a wedding photographer illegally led a drone into a High Court. Both got arrested. Here are 6 very practical situations where someone could get arrested on your wedding day.

Weddings and arrests do not go together.

'Arrest', on the other hand, just reeks of panic, red alarms, anxiety and uncertainty.

There is no reason why both these words should go together in the same sentence. EVER. But what happens when there is an arrest on the day of the wedding? It is awkward and embarrassing to say the least. Well, it definitely leaves a bad taste for everyone involved.

Well, here are 6 occasions where people have got arrested for some strange events that occured on their wedding day.

1. MESSING WITH THE FOOD

Recently, a bride and her caterer in Florida, US, were arrested for lacing the food served on her wedding day with pot and cannabis. What started as a prank turned into quite a serious business when many wedding guests got sick and called emergency services. 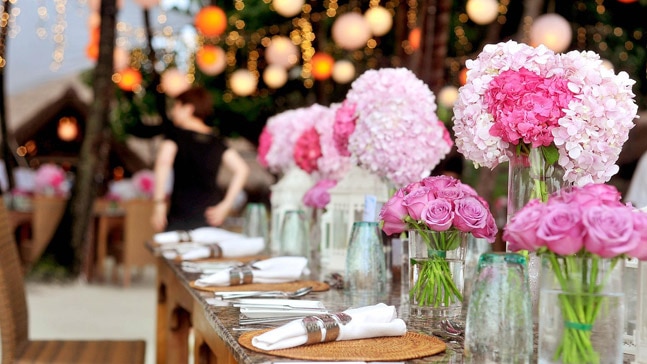 The wedding meal was NOT the most exciting part of this wedding. Representational pic: Pixabay

What started as a prank turned into horror when

This led to authorities to arrive at the couple's wedding venue to conduct investigations. When the authorities took samples of the food and the glassware, their investigation led them to the bride Danya Svoboda and the caterer, Joycelin Bryant. Once the caterer and the bride admitted to having added marijuana in the Caesar salad, pasta and bread, both the bride and the caterer were arrested. They have now applied for bail and will appear before a judge in June.

2. TAKE CARE OF WHAT YOU HAVE!

A just-married couple, who had just said 'I do', had the worst nightmare when the groom was taken away by the police by force during his wedding in Ecuador.

The police barged in, led the groom away and placed him in their vehicle and drove away. His new wife, who was obviously outraged, attempted to follow the police car in another car. What happened to the wedding guests? Well, they were angry and confused as expected.

Why was he arrested though? Well, the groom in question apparently owed several months' worth of child support money to another woman from a previous relationship and with whom he reportedly has several children.

So folks, please make sure that your past is well taken care of before you say 'I do' again. Lest your ex come up with some tactic to mess your best day saying:

3. A STOLEN DRESS AND HEIRLOOMS

A newly married couple got arrested at their wedding after it was found that the groom had stolen his ex-wife's wedding dress and given it to the new bride! When Mary and Adam got a divorce, Mary's wedding dress and family heirlooms went missing. But she ignored it thinking that she had misplaced it and would eventually find it somewhere.

Eventually Mary left the firm, and Adam and Chelsea decided to get married. They invited the entire office staff to the wedding.

On the day of the wedding, a common office friend of Adam and Mary noticed that Chelsea, the new woman, was wearing a dress that looked similar to Mary's wedding dress. So, out of curiosity, this common friend took a picture of the gown and sent it to Mary. Her text read: “Doesn’t this dress look familiar?”

Now, Mary the ex-wife saw the message but didn’t reply. Instead, she called the cops.

Within an hour, the police showed up at the wedding venue and asked Chelsea to take off the dress and jewellery, which actually belonged to Mary. Since the newly married couple did not agree, they were taken to the police station.

It later came to light that Mary has asked Adam where her belongings were, but he had lied about it and instead of confessing the truth, had stolen it and given it to Chelsea.

So, how did this end? Chelsea had to leave the wedding dress and jewellery at the police station and go home in her lingerie and Adam's jacket after they were bailed out.

When a wedding photographer attempted to fly a drone inside the Madras High Court in Chennai, he might not have imagined that an act like this would lead to his arrest.

M Vishal, the wedding photographer was at the High Court’s south gate, shooting videos for a wedding, and wanted to capture the court campus with a drone. He decided to fly the drone to capture images for the wedding album. But when the CISF personnel noticed the flying object, they rushed to the gate and apprehended him.

As he did not have the permission to shoot inside the High Court and since in India it is illegal to shoot in public areas and sensitive areas like courts, he was arrested under Section 287 of the Indian Penal Code (negligent conduct with regard to machinery). They also seized a drone and other equipment valued at Rs 2.5 lakh.

The police arrested a groom in Narowal, Pakistan, after he was gifted a Kalashnikov and 9mm pistol on his wedding. A video in which the groom's friends were seen gifting the weapons to him was reported on 24NewsHD TV. They were seen handing him the guns instead of money or other traditional gifts in March 2022. The police then filed a case of illegal possession of arms against the groom and later arrested him.

When the groom noticed a wedding crasher at his wedding party in Florida, US, he knew he had to do something. Gloria Colwell, the wedding crasher was eating and drinking and acting belligerent, and was nicely blending into the party. Immediately, the groom went in and asked her to leave. But she pretended to be with a guy who was next to her. But after several people at the party asked her to leave, she got violent and started cursing everyone.

That is when the police was called, but when the police showed up and tried to arrest her, she refused to give them her name. Eventually, she was handcuffed and taken away and the party continued without her.

#Wedding arrest, #Wedding disaster, #Wedding day, #Arrest on wedding day
The views and opinions expressed in this article are those of the authors and do not necessarily reflect the official policy or position of DailyO.in or the India Today Group. The writers are solely responsible for any claims arising out of the contents of this article.