Together, they seem to have an eerie, watchful atmosphere.

Haunted. Sacred. Cursed. Can an object trap old vibrations? If the curators of esoteric museums around the world are to be believed, objects can even retain a haunted past. The Warren's Occult Museum in Connecticut, USA is said to house the world's largest collection of haunted objects. Their nephew John Zaffis also has a Paranormal Museum in Connecticut which houses objects removed from homes with psychical disturbances.

In India, I have seen striking objects which are palpably "living" and have a strange past, in the private collection of Wiccan Ipsita Roy Chakraverti.

One of these is a striking set of three skulls, called the Laughing Skulls of Machu Picchu. Carved out of raw carnelian and cat's eye, these skulls are of more recent origin, but have an unusual purpose. They have been used in ritual practices following the tradition of Mesoamerica. That old race believed skulls to be a medium of communication between this world and the next and that through skulls, messages from the Gods and elemental beings could come forth. They would appease these skulls so that the spirit of the macchu would look upon them with favour and grant them their wish.

The tradition speaks of nights of the full moon as being especially potent, when the spirit of the macchu would walk this realm and speak through the skulls. The set of three in this collection has been used and activated in such manner for many years now. To gaze upon the three together, it believed to bring good fortune to the beholder.

A set of nine figures sit in sinister silence upon a black satin spread. Carved of bamboo, they depict the bust of women with stoical expressions upon their faces. Except for two where the features have sharp lines of pain etched upon the face. 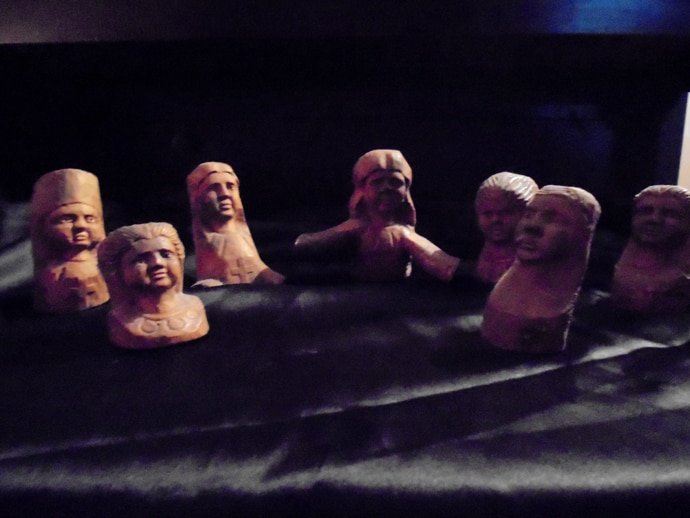 There is a savage, primitive feel to the whole. The busts are worn, and most of them are strangely blackened. No amount of polishing or cleaning can remove the dark stains which streak upwards from the base and over the face. One of the figures has a headdress carved into the wood, as if from a religious order. Another has two arms ending in truncated stumps. Together, they seem to have an eerie, watchful atmosphere.

These figures have a history which takes one to the northeast of the country where they were found in an old curio shop. It is said that about a hundred years ago,  a group of women missionaries had gone to that part of the country, seeking to spread their faith and their ways amongst the people there. The natives, many of them tribals, had hated them and had clung to their pagan faith.

It is said that finally, the natives had rebelled against the intruders' desecration of one of their old deities, a forest god. It was soon after that there had been a fire in the house where the women were staying. No one knows what happened after - it is assumed they went back. This set of figures was discovered in the small patch of garden behind their old house. Someone must have gone and placed them there afterwards.

The esoteric theory of sympathetic magic seems to have been played over these figures, where miniatures of the missionaries were made and maybe set fire to, in order to try and affect the actual people. Working on the microcosm, to affect the macrocosm. Did it work? Was the fire accidental? Questions will always remain. But for now, the figures stand and watch, impassive, alive and alert. 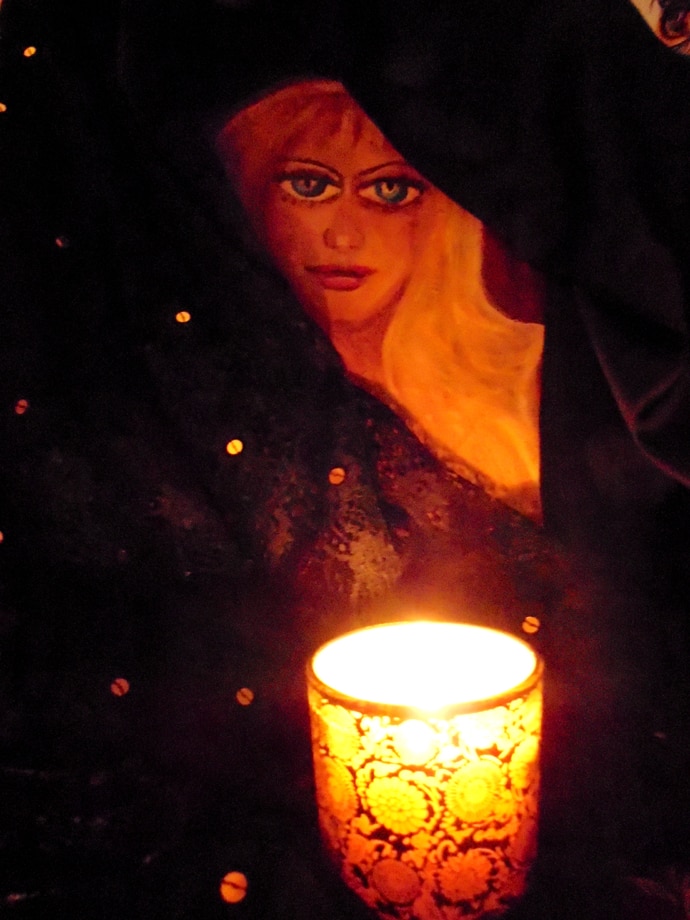 Then there is the portrait of the Loving Doll written about by Ipsita Roy Chakraverti in her book Sacred Evil. She was a beautiful toy, a child's birthday gift. But behind the beguiling eyes and the rosebud mouth, there lurked a dark secret. Her past went back to Germany, where an old psychic had worked strange rituals on the doll, so that this beautiful form could give beauty and youth to an ageing form, by stripping it away from a younger person.

It would be "activated" by human blood. The bizarre tragedy which had led to the child's father taking this doll to Ipsita, was that his wife had started using this doll, and her "sacrifice" was her own daughter. It was the child's blood the mother was using. Today, the doll is kept locked away in Ipsita's collection, but before doing so, Ipsita painted a small portrait of the beautiful porcelain form.

It seems to portray that moment of transformation, from innocent doll, to an activated "vampire". Ipsita always keeps the portrait half-veiled. One never knows when too much of the doll's personality may have transferred onto the canvas.

These objects and more will be on display at the country's first festival on the esoteric, presented by Ipsita Roy Chakraverti - The Beloved Witch Supernatural Literary Festival in Kolkata from March 4 to March 6, 2016.

#Occult, #Witchcraft, #Supernatural
The views and opinions expressed in this article are those of the authors and do not necessarily reflect the official policy or position of DailyO.in or the India Today Group. The writers are solely responsible for any claims arising out of the contents of this article.