Some Hindus are (sadly) puritanical – ashamed of all things sexual. These are Victoria’s children, still stuck in the 19th century, still striving hard to convince Queen Victoria that they are not effeminate luxury-loving sensuous Hindoos, that they are mommy’s good boys, who don’t look at women that way. They are conditioned to be embarrassed of their desires and refuse to acknowledge women as autonomous sexual beings. So they deny the Tantrik aspect of Hinduism, where the divine feminine is central, and prefer to explain Hinduism through the filter of Middle American Christian or Middle Eastern Islamic fundamentalist groups where sex is sin (hence erotic is evil), and women are handmaidens of the Devil (and, therefore, must be tamed before they turn wild). For the rest, who are comfortable with the divine feminine, a yogini opens the door to the tantrik approach to wisdom, not via ritual as in Mimansika, or the head as in Vedanta, or the heart as in Bhakti, but via the body, the rush of sensations, the pleasure, pain and the terror it evokes. If mantra, deals with mind (mantra), then tantra deals with body (tan). Due to its esoteric nature, tantra has always shunned mainstream, presented its ideas in code, rather reluctantly (first Tantrik texts emerge around 1400 years ago, though tradition is much older), preferring oral transmission from teacher to student.

But first the word witch.

The word witch is a derogatory term used like the colloquial Hindi word "dayan". Both words refer to women (though there are wizards too) - it refers to a magician, a sorcerer, who casts spells and causes all kinds of problems like miscarriage, sickness in children, epidemics, infertility, wasting, and impotency. People feared their knowledge, but also used it against their enemies. The word witch may have its roots in pagan (pre-Christian) traditions, and probably referred to women who practised medicine and knew how to use herbs and minerals to heal or harm. They saw the forest as a Goddess and surrendered to her mysterious cycles. They refused to be part of the mainstream society and preferred living alone, in communes, using men only as lovers, friends and assistants, rejecting the institution of marriage and the confinement that came with it. Mainstream society feared, but simultaneously respected and venerated these forest women. The word "dayan" probably comes from words like "dakini" or "dankuni" found in folk Hindu and tantrik Buddhist tradition, referring to wild goddesses associated with the forest, who are sexual and violent, in contrast to tamed, domesticated gentle goddesses. There was always palpable tension between these women and mainstream society. With the rise of Christianity, these women were systematically massacred. Even today, in rural India, it is not uncommon to hear tales of women killed brutally after being accused of witchcraft. In Islamic communities, these women were associated with the dreaded djinns. In Victorian Europe, there were tales of the succubi who seduced men and stripped them of their virility. Similar tales of yakshinis are told in Kerala. Was the yakshini just another name for the yogini? We can only speculate. I feel that the yogini was very different from the yogi. While the yogi sought escape from both nature and culture, the yogini celebrated nature. I base my truth on Buddhist, Hindu and Nath lore.

Buddhist lore speaks of goddesses such as Vajra-yogini, and she is clearly associated with Tantrik Buddhism, and visualised as the powerful goddess, wild and untamed, sexual and violent, who dances on top of corpses, holding a knife in one hand and a bowlful of blood in another; she often sits on top of the Bodhisattva and copulates with him - images that are known as Yab-Yum or father-mother, images in Tibetan Buddhism. Are these to be taken literally? Are these metaphors for primordial union of female compassion and male wisdom? Are they images of secret tantrik practices aimed at causing the reverse flow of semen in men via the spine? We can only speculate. But belief in these practices is strong in many tantrik schools. If the images evoke the image of Kali of Hinduism, it is not surprising, for Tantrik Buddhism and Hindu Shiva-Shakti traditions have a lot of overlaps.

Hindus built at least four temples to the collective of 64 yoginis - two in Odisha, at Hirapur and Ranipur-Jharial, and two in Madhya Pradesh, Khajuraho and Bedaghat. These temples are unique in that the temple is circular, al fresco and the images of the 64 yoginis located in the periphery face inwards. In Hirapur, they are depicted standing on various vahanas.

In Ranipur-Jharial, they dance. In Bedaghat, they sit. Their names reveal all kinds of women: from female form of male gods (Aindri, Varahi, Vaishnavi), to independent goddesses (Kali, Chinnamastika), to benevolent goddesses (Lakshmi) to malevolent goddesses (Birupa), some young, some old, some desirable, others hideous. The whole spectrum of femininity is thus celebrated, not just what is deemed appropriate for culture. This tradition has been overshadowed today by the celebration of celibate male ascetics who reject all things feminine 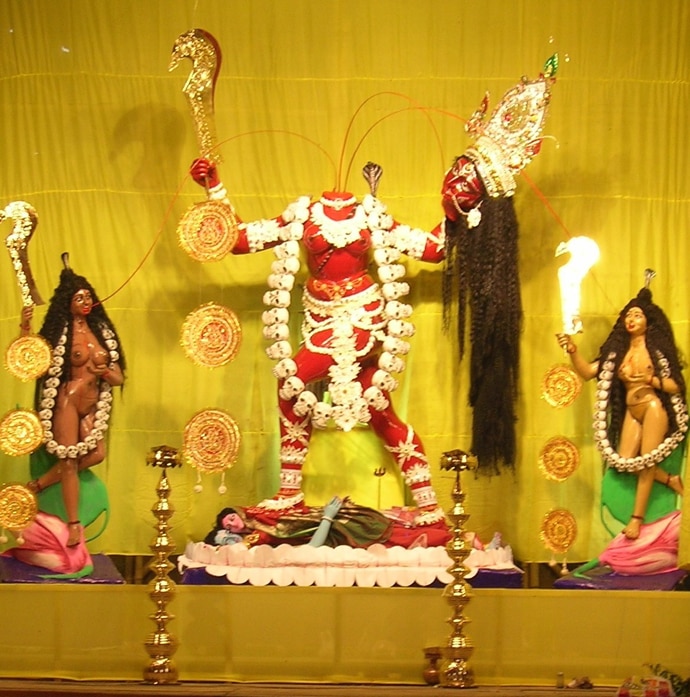 In Nath lore, the yoginis are powerful women with magical powers, usually belonging to "lower" castes, engaged in professions washing clothes, pottery, weaving, or attending to crematoriums. They are in conflict with the celibate monks with yogic powers attained through celibacy (siddha). So there are tales of how Gorakh-nath rescued his guru, Matsyendra-nath, from the realm of women who enchanted him to give up the life of a hermit. And there are tales of war between Jalendranath and the yoginis who turn Jalendranath’s disciples into donkeys, much like Circe of Greek mythology. Are these real stories? Fantasies of a culture uncomfortable with women who refuse to bow to men? Or sacred stories revealing the tension between male celibacy and female sexuality? We can only speculate.

Some Hindus – often "upper" caste men from urban areas who aspire to migrate to the West after obtaining degrees in India – deny the existence of these stories or claim they are not part of "pure" Hinduism. They feel especially angry when female academicians (perhaps in mischief, or in the spirit of genuine research) point to these stories and unseat them from their high puritanical horses. It's the same male rage that we see on the internet against strong, liberated feminists.

The yogini informs us that Hinduism is vast and heterogenous, and not just the bastion of male puritanical Brahmins and hermits. Do we need the permission of these men to see yogini as another aspect of Bharat Mata?

Post your comment
#Tantriks, #Witchcraft, #Yogini, #Erotica
The views and opinions expressed in this article are those of the authors and do not necessarily reflect the official policy or position of DailyO.in or the India Today Group. The writers are solely responsible for any claims arising out of the contents of this article.