Two years of Modi sarkar have been a failure: Do saal, bura haal

Where are the elusive 'acche din'?

About 12 months ago, as we were heading towards the completion of the first year of the Modi sarkar, I wrote a piece that encapsulated the 15 major U-turns taken by the prime minister on promises made to the nation during his 2014 Lok Sabha campaign. Since then another year has gone by and we all are in the midst of putting into perspective the deliverables, if any, in the last two years.

Many of his staunch supporters, "bhakts", as they are often referred to, have often made the flimsy argument that "those who governed us for 60 years (read: Congress) should not ask PM for an appraisal in merely 24 months". Perhaps, they forget that in those 60 odd years not only was the Congress government judged after every five years in recurring general elections, but also invariably judged by an overactive media and the constant spate of state Assembly elections that took place at frequent intervals.

Those who complain about being judged in a democracy, even if it's before their tenure runs out, express more faith in the North Korean version of "democracy" rather than the one we are so proud of here - one that encourages constant critiquing and performance appraisals. 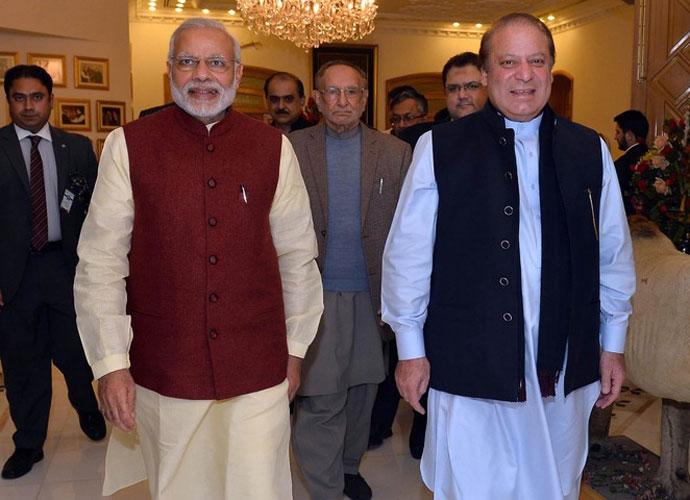 Modi's Pakistan policy has suffered from serious defects. It has been driven by style over substance.

Clearly, the significance of this two-year milestone is lost out on those who see this as nothing more than a "happy birthday to Modi government" kind of occasion. Modi has completed 40 per cent of his term in office. If he doesn't do serious introspection and necessary course correction now, he will, in all likelihood, be voted out. And if the Delhi or Bihar election results are anything to go by, the Modi wave has washed ashore a long ago.

Assam may have gone BJP's way but can hardly be seen as an endorsement of the Modi government. The strategy of the BJP in Assam, contrary to the one in Delhi and Bihar, where Modi was the face, was to emphasise on local alliances and give importance to the local faces of current CM Sarbananada Sonowal and erstwhile Congressman, Himanta Biswa Sarma.

In all the five states that went to the polls recently, BJP dropped its vote share since 2014, and minus Assam, it won just four seats in the remaining four states. Even the Congress party scored nearly twice as many Assembly segments (115) compared to the BJP (64) out of the 800 plus seats that went to the polls. In all, the Modi tsunami is now withdrawing back to the sea and those who revelled when it hit the coast are now in a real danger of being drowned by it.

The last 12 months, beginning May 2015, the narrative has been one of social upheaval and polarisation - sometimes on issues like cow slaughter, and on other occasions, nationalism.

The Modi government and its supporters have been busy picking issues that divide the country rather than unite it. From attacking Aamir Khan and Shah Rukh Khan on their remarks on "intolerance" to the debate on "Bharat Mata ki jai", and the artificial JNU controversy on nationalism.

Parliament, where Modi continues to lack the numbers in the Upper House, resembled an arena for gladiators, where the government seemed more keen on confrontation than conciliation in order to get tricky legislations passed. Consequently, very little has actually got done on the development and economic front. Modi government and its supporters have been busy picking issues that divide the country rather than unite it.

Retail inflation, measured by the Consumer Price Index (CPI), is up from five per cent in May 2015 to 5.39 per cent this year and IIP (Index of Industrial Production) has contracted from above two per cent last year (2015) to 0.1 per cent this year. Exports from India fell 6.74 per cent year-on-year to $20,570 million in April of 2016, the lowest since November of 2015. It was the seventeenth straight month of decline as non-petroleum exports decreased to 3.49 per cent.

The last two years, if seen in totality, offer very little for the Modi government to gloat about. Events and diversions may win one short-term control over the media narrative, but without fulfilling the big promises made, the general sense of dejection and disillusion that has been set in, even amongst vocal supporters of Modi, will not abate.

A large reason for the victory of Narendra Modi was the tremendous support he got from first-time young voters and floating voters - folks who saw him as the best alternative then may very well change their opinion come 2019 - that is the nature of a fence sitter who isn't ideologically wedded to what the BJP represents.

Unfortunately, the BJP under Modi has only done things that appeal to its core, committed base and has virtually forgotten the large section of moderates who voted for "development" not "division". Modi's biggest promise to the young voter was to create two crore jobs each year. But Modi failed to keep that promise.

Textiles, leather, metals, automobiles, gems and jewellery, transport, information technology and the handloom sectors together created just 135,000 jobs during 2015, 67 per cent lower than 421,000 jobs that were added in 2014, the last year of the Manmohan Singh government.

Modi's Pakistan policy and his foreign policy, in general, has suffered from serious defects. It has been driven by style over substance, adventurism over analysis; by self projection, vanity and petty domestic political calculations over larger interests. The ministry of external affairs has been more like a tour operator or logistics handler, and not a source of policy and executive inputs. 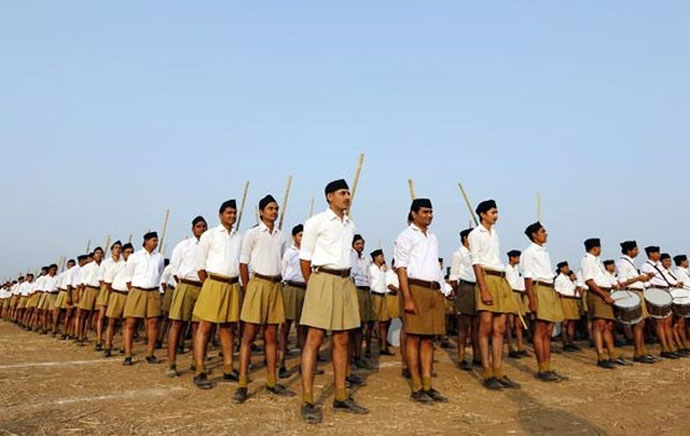 Non-performance of Modi's ministers is allowing RSS a greater say in governance.

And the results are for all to see.

Relations with our neighbouring countries are at an all-time low. Nepal has been pushed to the Chinese corner. Pakistan has been allowed a virtual clean chit on Pathankot by the foolish decision of allowing the ISI to come and investigate the dastardly attack on our air base. And the Kashmiri separatists, who were until yesterday reduced to persona non grata, have now been adopted and legitimised like never before by the Modi government, perhaps under the compulsions of a rather uneasy alliance with the PDP.

What stands out as the biggest failure, however, is the mishandling of the agriculture and drought situation across India and the continuing neglect of agriculture. While Modi promises to double agricultural incomes, it is yet to be seen how he will achieve that target.

Agricultural growth rate has fallen from about an average of 3.7 per cent per year under UPA to just about one per cent and heading southward. Prior to elections, BJP promised that it would incorporate 50 per cent profit in the MSP (minimum support price) for farmers, but facts show that this has been less than six per cent.

For example: The UPA government had increased the MSP of Arhar by Rs 2,910 per quintal and Moong by Rs 3,090 a quintal, from 2004 to 2014 - an average hike of around 20 per cent through a ten-year period. This was done to ensure that farmers got a fair price for their produce and the increased purchasing power of the farmer led to higher growth. The average rise during the first two years of the NDA government has only been around four per cent.

The drought situation was totally neglected. While water trains and tankers were pressed into service, perhaps in another attempt to engage in event management rather than drought relief, the drought manuals and rules by the government itself said these were measures of last resort and a number of steps ought to have been taken before reaching that step which the government at the Centre and state missed.

This was confirmed when a rather candid Union water resources minister Uma Bharti, in an interview to a TV channel, said that it was pointless planning in advance for a drought. It clearly showed the lack of seriousness and intelligence by the government of India in assessing and mitigating the drought situation. Due to this, the crisis worsened and has engulfed over one third of the country, afflicting nearly 33 crore Indians across several states.

Drought is, perhaps, the only natural calamity one can plan against in advance, unlike floods and earthquakes. Even the National Disaster Management Authority manual on management of drought speaks of "drought mitigation" as part of public policy and not just drought relief but this was clearly lost on the Modi government.

Also read: One in four persons now affected by drought. When will Modi sarkar wake up? Modi government's biggest failure has been the mishandling of agriculture and drought situation across India.

Consequently, on several occasions, the Supreme Court was forced to pull up the central government for not "showing seriousness" in dealing with the drought situation across India, especially when the ASG arrived late for a drought hearing in court.

SC rejected the attempt by the central government to transfer blame onto the states and said: "Central government has technology (such as satellite imagery) at its disposal. Can you not say on the basis of that information that you (any state) are headed for trouble. You are also under a duty to say that everything is not alright, please take remedial measures. If the state does not do so, you have recourse to other sections of the Constitution."

In January 2016, the Union government told the Supreme Court that for all drought-hit states, NREGA's 100-day limit has been increased to 150 days. The government told the court that the "budgeted amount for the additional days' work has already been released to the states."

But this has been a completely lie.

In fact, the NREGA website showed that the government owed 13 drought-affected states more than Rs 5,900 crore for 2015. Under pressure the central government released 12,000 crore rupees, but given that a major portion of it was meant for outstanding wages, this sum proved to be woefully inadequate and hence only 48 days of work were being provided instead of the statutory 100 days.

Data for ten drought-hit states show that a total of 1.52 crore people got employment under MGNREGA in the financial year ending March 31, 2015. But of this, just 2.80 lakh, ie 1.8 per cent were employed for 150 days.

In a nutshell, the two years of Modi government have brought precious little to cheer for the aam admi. If I could throw a jumla back at Modi it would probably be: Do saal, bura haal, which completely betrays the grand expectations of the elusive "acche din".

The anxiety and disappointment over the non-performance of Modi's ministers is palpable. This is allowing RSS a greater say in matters and the conversation is veering off course, from the path of development. Patriotism, it's said, is the last refuge of the scoundrel and in the case of Modi's government, pseudo-patriotism is the last resort of the incompetent.

#Achhe Din, #BJP, #Narendra Modi, #Two years of Modi
The views and opinions expressed in this article are those of the authors and do not necessarily reflect the official policy or position of DailyO.in or the India Today Group. The writers are solely responsible for any claims arising out of the contents of this article.