Can a mega anti-BJP alliance win against Modi in Lok Sabha 2019?

The instability, which comes from any such experiment failing, makes it unattractive for voters to bank on.

The spectacular win of Nitish Kumar in Bihar and a convergence of anti-BJP forces (regional players like the Congress and the Left) in his swearing-in ceremony is seen by political pundits as a build-up before the formation of a grand anti-Modi alliance in the country. While not entirely impossible, the alliance is fraught with inherent contradictions and will require a lot of effort to stay relevant. The logic, however, is simple. The BJP received 31.3 per cent voteshare in the 2014 Lok Sabha elections. If the majority of the bigger opposition parties rally against BJP in 2019, it could lose.

Something similar happened in Bihar where Lalu-Nitish-Congress joined hands to defeat BJP. This has not only emboldened anti-BJP/anti-Modi forces, but also sown seeds of revival for the down and out Congress party. The Congress improved its tally from four seats to 27 seats in Bihar. It's possible that the Congress, the Left and regional parties opposing BJP and its ideology would try to form an all India anti-BJP front in the 2019 LS polls, along the lines of the Janata Party in 1977.

In the 1977 LS elections, held after the Emergency was lifted by Indira Gandhi, four major political parties - Congress (O), Bhartiya Jan Sangh, Bhartiya Lok Dal and Socialist Party - came together under one banner to oppose the Congress. While these parties were different from one another ideologically, their common theme was built around the anti-Indira, anti-Congress philosophy. The Janata Party won the elections and Morarji Desai became the first non-Congress prime minister of the country, 30 years after independence.

A. Why are many parties keen to jump onto the anti-BJP bandwagon?

1. BJP, not the Congress, is now the principal party in the country

BJP has overtaken the Congress as the major political force in the country. Not only does it have 281 MPs in Lok Sabha, but also chief ministers in eight states (Gujarat, Maharashtra, Goa, Madhya Pradesh, Chhattisgarh, Rajasthan, Jharkhand and Haryana). In five states/Union Territories (UTs), its allies occupy the CM's chair (Jammu and Kashmir, Andhra Pradesh, Punjab, Nagaland and Puducherry), making BJP/NDA-ruled states' seat tally at 13 (40 per cent of total number of states/UTs in India having a CM).  Contrast this to the Congress, which rules/shares power in ten states, half of which are in the Northeast (very small and not playing a dominant role in national politics - Assam, Arunachal, Mizoram, Meghalaya, Manipur). 2. The grand old party is ready to be more accommodative owing to a real "Congress-mukt-Bharat" threat

A mere 45 MPs in Lok Sabha has made the Congress weaker. The current leadership crisis (the cold war between the young brigade led by Rahul Gandhi and old warhorses) has further worsened matters. The Congress is seen willing to piggyback on the strength of regional parties where it does not have significant hold left (like in Bihar). Regional parties now feel more confident that they will be able to manage Congress better and, hence, are not wary of the alliance.

3. BJP is becoming stronger in states in which it is not in power and emerging as main opposition

In many states (Odisha, Tamil Nadu and West Bengal), the BJP is seen emerging as the main opposition party. In West Bengal, it won two seats, similar to the Left front in LS polls held in May 2014. In Odisha, it won one seat, while the Congress drew a blank. In Tamil Nadu too it won one seat, while the DMK drew a blank. In Kerala, the BJP has started making inroads with a decent show in the state municipal elections. In Assam, it won the state municipal elections defeating the Congress. From being a principally Hindi heartland party, it is spreading its wings to the nooks and corners of the country.

BJP and its sister organisations are seen as right-wing outfits fighting for the cause of Hindutva. While the minority community is seen as voting en bloc, Hindu votes get divided in the name of caste. In Uttar Pradesh, during the LS polls, the massive Hindu consolidation in favour of BJP (on an average 50 per cent plus from sub-caste groups except for Yadavs and Dalits) saw BJP win 73/80 seats. Hindus account for 80 per cent of India's population and the 50 per cent voting for BJP would loosely translate into 40 per cent voteshare, which is enough to win any national election.

Regional parties fear that if UP's LS model is replicated in other states, they would fail to survive. This didn't work for BJP in Bihar state polls, but thee is no guarantee that it won't in other states. The era of alliances - 1989-2014 - has made regional parties taste power at the Centre. If BJP emerges stronger, regional players will lose power sharing at the Centre. This is also applicable to BJP's current allies. 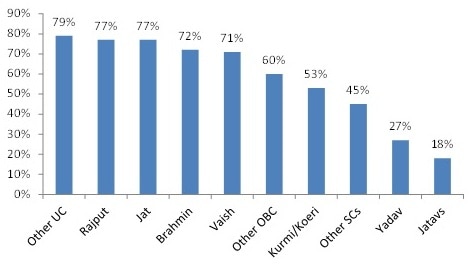 Bihar has shown that the sheer arithmetic advantage of a united opposition is too much for BJP to handle. In Delhi, there were reports of the Congress covertly batting for AAP candidates as soon as it realised it is not in the race.

B. Why an umbrella alliance of anti-BJP forces is easier said than done

The 2019 LS polls saw participation of 464 parties along with independents. Only 17 parties recorded a vote share greater than one per cent, accounting for 86.9 per cent of total votes polled. This leaves 16 parties (excluding BJP) to come to some sort of understanding to defeat BJP.

To form a grand alliance of regional parties and lead it from the front looks easy for the Congress on paper. But it's not as simple as it appears because of the acrimonious history of some of the parties. SP and BSP can't survive on the same boat. Similar is the case with AIADMK and DMK, TRS and TDP, Shiv Sena and NCP. The Left and the Congress are the main contenders in Kerala and Tripura, and any national level pre-poll understanding will jeopardise the Left's chances in the two states.

Further, with the Congress in a depleted state, regional satraps may not want Congress to lead an alliance. Also, it is likely that none of them will agree to nominate one another's names. Nitish won't agree on Mamata, Mamata won't agree on Naveen, Naveen won't agree on Naidu, Naidu won't agree on Amma, Amma won't support Mulayam and Mulayam won't agree for Nitish to be the PM candidate of the alliance. All the leaders have been chief ministers of similar stature, so why would they promote others? The leadership issue is the biggest tangle of the proposed alliance.

C. Why the experiment is bound to fail

All the parties seen together during Nitish's swearing-in have different ideologies and policies. The Congress, Left and former Janata Dal splinter groups have serious differences on economic issues like disinvestment, taxation and FDI/FII policies. This makes the creation of a common agenda/manifesto cumbersome and voters wary of such alliances.

Anti-BJPism/anti-Modiism is the common thread that would bind the alliance. People could see it as a negative and the coming together of the parties only for the sake of power and not with the intention of taking India to new heights.

2. Too many cooks spoil the broth

As discussed above, most of the parties which are expected to join this mega alliance, have leaders nursing prime-ministerial ambitions. This may lead to the difficulty of arriving at a consensus on the declaration of a PM candidate. Modi, who is likely to be the PM candidate of the BJP again in 2019, will benefit from it as India is moving more towards the presidential style of elections (MP, Chhattisgarh, Rajasthan, Delhi and Bihar) as people want clarity on leadership.

3. The track record of such governments has been poor

Six previous governments have been formed on anti-Congress planks, and all of them have lasted less than one-and-a-half years. Four of these governments actually survived on outside Congress support contrary to the mandate they had received.

This shows that such "khichdi" governments are not stable and won't last because their inherent differences will put them down sooner rather than later. The BJP could use the same tricks of the Congress and actually poach some disgruntled sections with better offers and break the alliance at any point.

4. Many regional parties may not join the mega-alliance

The BJD and the AIADMK have maintained a non-Congress, non-BJP stance for some time now and are unlikely to join. As discussed earlier, either of the following groups of parties may not join - SP/BSP, NCP/Shiv Sena, TDP/TRS making the alliance weak and hence difficult to dislodge BJP.

Some members of the proposed alliance - especially ex-Janata Dal splinter groups like SP, JDU/RJD, BJD, JDS (Deve Gowda), INLD (Om Prakash Chautala), SJP (ex-PM Chandra Shekhar's party) and their ilk do not see eye to eye. When talks of a united Janata Parivar were doing the rounds and Bihar was to be the testing ground of the alliance, Mulayam withdrew at the last moment, giving unconvincing reasons. If these parties are in the proposed alliance, these issues will continue and may hamper its prospects.

To sum up, a potent grand anti-BJP/anti-Modi alliance in 2019 will take serious efforts from all sides to materialise. The inherent contradictions within any such alliance are not likely to be contained for long. The added instability, which comes from any such experiment failing, makes it unattractive for voters to bank upon. India is at an important stage in its life-cycle and can't leave it to an opportunistic/unholy alliance to rule the country. So, instead of focussing too much into the coming together of opposition parties, Modi should carry on his development agenda fearlessly.

#Opposition, #Narendra Modi, #Bihar polls, #2019 Lok Sabha polls
The views and opinions expressed in this article are those of the authors and do not necessarily reflect the official policy or position of DailyO.in or the India Today Group. The writers are solely responsible for any claims arising out of the contents of this article.