Before addressing Sukma attack, fix North Block to do justice to CRPF martyrs

For home minister Rajnath Singh to accuse Maoists of 'cold-blooded murder' is a case of being poorly informed.

It was March of 2014 when in the jungles surrounding Koraput in Odisha, a police team spent a night in hiding, ready to attack Maoists who they knew were to cross a stream. By the morning, the team left empty-handed. “Later we realised the rebels did come short of crossing that stream when they spotted our footwear marks on the soil and quietly changed their path,” said the officer.

From field-level tactics to post-incident evaluation to carrying out studies on Improvised Explosive Devices (IEDs), impairing drones and helicopters, the Maoists, anyone with any experience of the trade will tell you, make an honest attempt of their job.

Thus, for India’s home minister Rajnath Singh to accuse them of "cold-blooded murder" is a case of being poorly informed.

Nevertheless, the establishment has been jolted with the loss of 25 more personnel. Only last month, in the same state, the same district, the same force was routed by the same adversary. The guerrillas then killed 12. About 60 security personnel have been killed by the Maoists within the four months of this year. 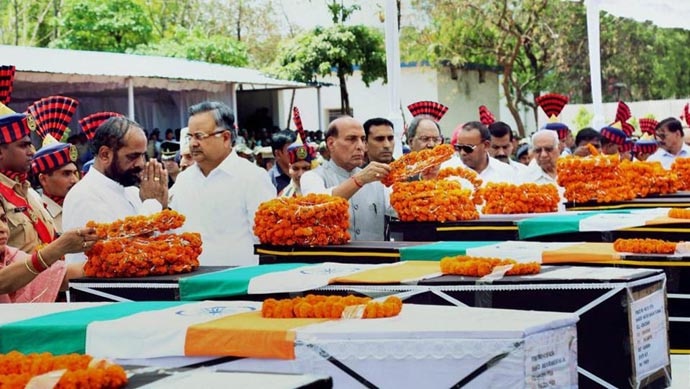 While the top fumbles with hardly any accountability, those on ground will pay with their lives for one wrong step taken. Photo: PTI

Nothing hereon will matter more than the rectification at the top, inside the North Block where the Ministry of Home Affairs (MHA) is expected to hammer into shape the contours of this fight. Yet its absurdities have gone unchallenged and unrepaired:

1. In a Parliamentary Committee report tabled on March 15, the Union Home Secretary Rajiv Mehrishi has been quoted as saying the government had no money to provide mine resistant vehicles to protect troops from Maoist mines. The committee was "constrained to observe that lack of financial resources is becoming a reason for casualty of valuable lives being lost in the battle against Left Wing Extremism".

2. To deal with Maoist mines, the MHA told the Parliament it is ensuring the availability of more than one mine proof vehicle (MPV) per battalion. But it never told that its own guidelines (authorisation) hold that every battalion must hold between seven to ten MPVs.

3. The MHA also indirectly made the Jabalpur-based Ordnance Factory Board (OFB) look responsible for not producing enough MPVs. Why did the MHA not float a global tender if the OFB was slow? Minister of State in-charge of the Left Wing Extremism (LWE) desk, Hansraj Ahir said his government hadn’t given the idea a thought yet.

4. On April 12, replying to a host of Members of Parliament (MPs), Ahir patted himself on the back for year on year reduction of casualties of troops as if this conflict was about numbers alone. In the same deliberation, Ahir when asked about the modernised combat support and technology his government had brought to the troops said the troops now had helicopters and drones!

5. The efficacy/availability of drones comes under doubt when it hasn’t helped the CRPF pick any signs of back-to-back, massive ambushes which the Maoists laid barely 2km outside its camps! It also points to a breakdown of communication with the local community – the very people the CRPF is there to normalise the situation for.

6. Problem of poor leadership by the MHA compounds when it comes to CRPF, a force with lethal disconnect between the top and the bottom. That the MHA has kept the CRPF headless for nearly two months says so much.

7. Unfortunately the MHA and the CRPF have made a habit out of ducking from questions. Having covered the issue, I know the approach has the green signal from powerful quarters

8. With little to show in terms of deftly handling the Kashmir situation, the MHA finds itself in a corner. It simply does not have the troops it needs to strengthen its presence in the LWE states where the deployment is as such thin.

While the top fumbles with hardly any accountability, those on ground will pay with their lives for one wrong step taken.

A little-known success story that emerged for the US Marine Corps from Vietnam, documented in The Tunnels Of Cuchi by Tom Mangold and John Penycate, may hold relevance here.

A harassed young officer, Lieutenant Colonel Oliver, discovered how the native communist fighters were using underground tunnels to hit his troops and evade. Since the Americans had no experience in dealing with the tunnel menace, he took it upon himself to painstakingly learn and teach his battalion ways to identify bunkers, probe them and only upon completing this "course", he sought the permission to launch an "operation".

His troops seized the area, physically searched the ground for holes, any tell tale signs and kept up till 89 of the 92 guerillas operating there were killed, captured or had surrendered.

Also read: 25 CRPF personnel killed in Maoist encounter in Chhattisgarh: What you should know

#Maoists, #CRPF, #Sukma attack
The views and opinions expressed in this article are those of the authors and do not necessarily reflect the official policy or position of DailyO.in or the India Today Group. The writers are solely responsible for any claims arising out of the contents of this article.