What explains Aaditya Thackeray’s decision to jump into the electoral fray?

The Thackeray scion’s foray into electoral politics is a delayed attempt to win over Maharashtra the way only his grandfather did.

In the November of 2018 when parties and politicians were fastening their seat belts for the national elections, Uddhav Thackeray, chief of Shiv Sena, a party known for indulging in identity-based politics, was in Uttar Pradesh’s Ayodhya, a city considered holy and now mired in the Ram-Rahim controversy.

With regional identity as a mobilising factor having run its full course for the Shiv Sena, Uddhav was trying to give his party a ‘saffron shot’ in the arm only to realise (once again) in May 2019 that nobody plays the ‘saffron nationalism’ card better than the BJP. Not that Shiv Sena was toying with Hinduism for the first time.

In the 53 years of its existence, the Shiv Sena has experimented with umpteen ‘isms’. But the party failed to build on its record in the office that it occupied for four years from 1995 to 1999. Shiv Sena failed to win over Maharashtra the way BJP came to rule Gujarat.

Aaditya Thackeray’s foray into electoral politics is a delayed attempt to win over Maharashtra. 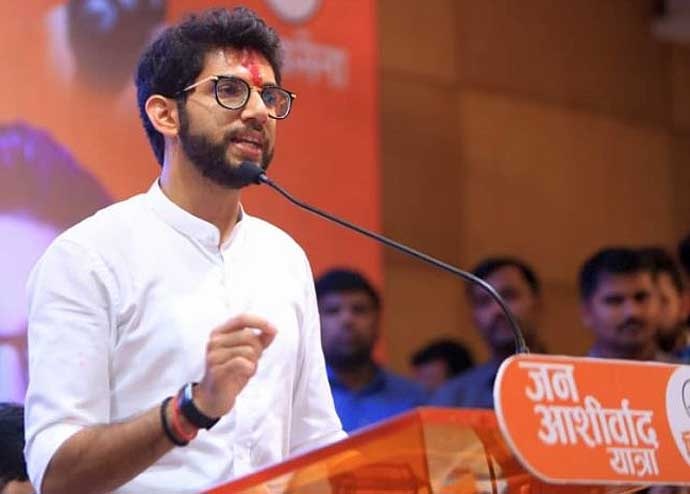 Aaditya Thackeray has been trying to improve his connect with the youth. (Photo: Twitter/@AUThackeray)

While Modi managed to consolidate the Hindu vote bank in the 2002 Gujarat elections, held soon after the riots, he managed to add the narrative of development to the state’s politics. It was this development plank that propelled Modi to helm the central leadership years later.

Despite starting off as the bigger partner in Maharashtra, Shiv Sena continued to lose ground even as BJP’s base continued to grow.

The party that began as a youth-based organisation became a victim of that image, unable to break free.

Let’s step back a little to understand why this happened.

Two years after legendary Marathi litterateur Acharya Atre announced the formation of Shiv Sena, the party actually came into being in 1966 under the leadership of Uddhav’s father Bal Thackeray, who had gained immense popularity for his illustrative campaigns against non-Maharashtrians in the western Indian state. The party made Bombay its laboratory, a city that was increasingly frustrated with the inflow of migrants. Tapping into this insecurity, Shiv Sena claimed Maharashtra belonged to the army of Shivaji, which by extension meant it belonged to Marathi speakers. But Shivaji wasn’t just a symbol of Maratha pride, he was a national hero. Shiv Sena’s regionalism thus came laced with nationalism and this nationalism had a tinge of saffron to it.

South Indians were the first to become victims of this parochialism. The ire soon turned to migrants from Bihar and Uttar Pradesh. By mid-1980s, the Shiv Sena was also fiercely at the forefront of fighting everything ‘anti-national’ as a Hindu nationalist force.

But that space was quickly taken up by the BJP with the Ram Mandir issue taking centre stage as the 1980s came to a close and the Babri Masjid was demolished in 1992.

Shiv Sena swept to power in Maharashtra in 1995 largely on the strength of the consolidation of the Hindutva base following the riots of 1992-93, but soon it became clear that Shiv Sena was no longer seen as the party of choice for the pro-Hindutva constituency because that space had been claimed by the BJP.

It became difficult for the Shiv Sena to thus widen its reach. In order to become a national party, it had to raise issues that went beyond Maharashtra, and Hindu nationalism was already in the BJP’s firm grip.

With the rise of Modi, Shiv Sena was forced to play second fiddle to the BJP in its own bastion. Aaditya Thackeray’s entering the electoral arena, only the second member of the Thackeray clan to do so, is an attempt to regain lost ground.

The 29-year-old has been in politics for the last five years and has been groomed to lead his five-decade-old party. No Thackeray has ever contested elections apart from Shalini Thackeray, a cousin of Aaditya’s uncle Raj, chief of Maharashtra Navnirman Sena (MNS).

Shalini lost the Lok Sabha elections as an MNS candidate.

Aaditya assumed a prominent position in the party’s decision-making a couple of years ago. He is trying to silently give the party an image makeover.

Sena’s hatred for the Left is well known. Leftists were the foremost among the ‘anti-national’ enemies of the Sena. Bal Thackeray had blamed them for the frequent strikes in mills, which he said, impeded the growth of Maharashtra.

Yet, in March 2018 when the farmers’ march organised by Communist Party of India (Marxist)-affiliated All India Kisan Sabha entered Mumbai waving red flags, Shiv Sena declared its support to them. Leading the charge was Aaditya.

I spoke to them yest., and before when we toured the State to hear them, help them. No I didn’t see the red flags, I saw their red blood which is the same as ours. Whichever the flag they carry, whoever their political hero, govt has to hear them. Fellow citizens #Farmers (1/2) pic.twitter.com/016vWnq999

In 2018 itself, Aaditya won a lot of praise when he insisted on a plastic ban in the state and introducing eco-friendly buses in Mumbai through the two departments that come under Shiv Sena — environment and transport. Recently, the Shiv Sena leader supported environment activists on the issue of the conservation of Aarey forests, sounding an alarm that destruction of this bio-diversity would cause floods in Mithi river. He said that the Mumbai Metro Rail Corporation Limited’s (MMRCL) adamant stand on setting up a Metro car shed after cutting trees in Aarey is a move against citizens of Mumbai.

Under guidance from poll strategist Prashant Kishor, Aaditya even started a campaign aimed at increasing engagement with the youth.

It is being speculated that if the ruling combine comes to power, which looks likely, while the BJP will get the chief minister’s chair, Aaditya could become the deputy chief minister. Aaditya is a political dynast, even if that dynasty is on the wane, so he may get the deputy CM’s post. The decision to contest from Worli stems from the same hope.

Also read: What Kripashankar Singh’s exit from Congress means for the BJP

Post your comment
#Maharashtra Elections, #Worli, #Shiv Sena, #Aaditya Thackeray
The views and opinions expressed in this article are those of the authors and do not necessarily reflect the official policy or position of DailyO.in or the India Today Group. The writers are solely responsible for any claims arising out of the contents of this article.