AAP ka kya hoga: Why AAP’s slogan of 'Delhi mein to Kejriwal' will find the going tough in the capital city

Arvind Kejriwal’s AAP, which has landed at third spot in Delhi, faces a two-way challenge now; a jubilant BJP and a resurgent Congress.

At a time when many parties are counting their losses, the Aam Aadmi Party (AAP) is making moves to cover lost ground — and make a poll pitch for the Assembly polls to be held in the national capital in 2020.

But the ground that AAP has to cover is a lot. The party has suffered not just because of a Modi wave that has swept nearly all parts of India, sans the southern states, but also faces a challenge from a resurgent Congress in the state.

The AAP has landed third in Delhi.

The AAP’s vote share in the national capital has plunged from 33% in 2014 to 18.10% in 2019. The party has ceded second place to the Congress and it seems that the grand old party’s last-minute decision to not enter a seat-sharing deal with AAP for the 2019 Lok Sabha elections has actually helped it. The catch, however, lies in the fact that even though the BJP won all seven Lok Sabha seats from Delhi in 2014 too, it won just three seats in the Delhi Assembly elections held a year later. On the ground, people in Delhi believed that while Narendra Modi was good to run the country as Prime Minister, AAP convener Arvind Kejriwal was good to run Delhi as its chief minister.

It is for this reason that AAP is apparently positioning its poll campaign around the party’s worth for Delhi.

Kejriwal, on Sunday (May 26), asked party workers to humbly accept the people's verdict and concentrate on the Assembly elections slated for next year. "Now, you go to the people of Delhi and tell them that the big election has ended and small elections are going to come, and in these elections, cast your vote on the basis of ''kaam'' (work) and not ''naam'' (name)," he said.

Will they sweep? A hoarding put up by AAP in Delhi. (Source: Twitter/@jainendrakumar)

But much has changed in Delhi since 2014.

The BJP’s victory across the country is bigger and the Congress too has managed to emerge on the second spot.

There is also anger in some quarters over the fact that AAP tried to forge an alliance with the Congress because during the India Against Corruption (IAC) movement, to which AAP owes its genesis, the likes of Kerjwial and Sisodia had targeted the Congress for its alleged corruption.

The CWG scam, which happened when Sheila Dikshit was Delhi chief minister, was in fact used by AAP to rise to power. Kejriwal had squarely blamed Dikshit for the alleged Rs 400 crore water tanker scam too, even saying she should be sent to jail for it. 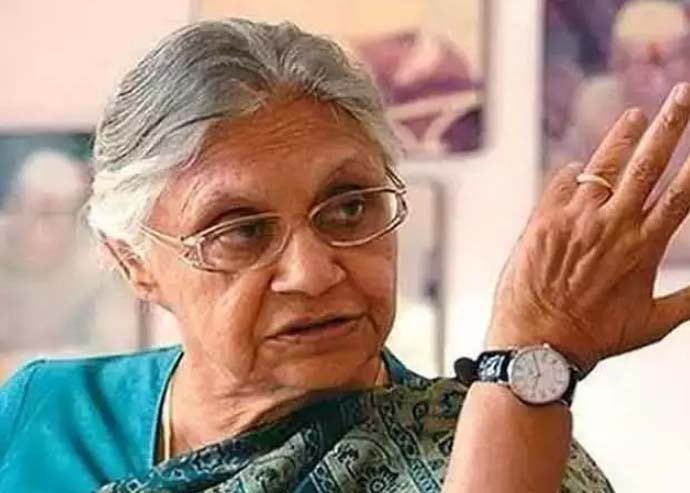 Strange Liason: Arvind Kejriwal was aggressively anti-Sheila Dikshit in 2014 and 2015 — then, he wanted to ally with her. (Source: PTI)

Now, it is a fact that electoral politics exposes power contenders to strange allies — but AAP gained public support on the promise of a politics of difference. This is where Kejriwal has disappointed people and AAP could end up paying for it in the Assembly elections as well.

The AAP won only one seat out of over 40 it contested across nine states and Union territories. In 2014, AAP won four seats in Punjab. This time, only Sangrur candidate Bhagwant Mann could retain a win.

The party’s ambitions of expanding beyond Delhi lie crushed.

And the challenge now is two-fold — it is not just the BJP, it is the Congress too.

Post your comment
#Congress, #Delhi elections, #Arvind Kejriwal, #Aam Aadmi Party
The views and opinions expressed in this article are those of the authors and do not necessarily reflect the official policy or position of DailyO.in or the India Today Group. The writers are solely responsible for any claims arising out of the contents of this article.