By using sedition to stifle dissent, BJP is imitating British Raj in the name of nationalism

From Haryana University (over Mahasweta Devi’s play) to Ramjas to Jodhpur University, ABVP is creating havoc on university campuses.

There is a spectre haunting world democracies. The spectre of absolutism. It is everywhere: politics, governance and universities. Elected dictatorships are on the move. Trump in America, Modi in India, Le Pen in France, and all around us.

Every absolutist carries a baggage of absolute support. The BJP’s student body, the ABVP, has decided to create havoc on university campuses. In this, they are protected by the BJP government in power which turns on others (such as the Left) accusing them of anti-nationalism and actually charging them with “sedition”.

In 2016, there were protests in JNU in which then JNUSU president Kanhaiya Kumar was accused of sedition. He was also threatened by a mob of BJP-oriented lawyers, who did not just stop at that but insulted even a Supreme Court team sent to examine the matter. The FIR was filed by BJP MP Maheish Girri; and home minister Rajnath Singh promised to come down heavily against those who raised “anti-India” slogans.

JNU rusticated Umar Khalid and fined his friends. Political support against ABVP was inevitable as Kejriwal, Shashi Tharoor and Karat expressed solidarity with the victims of this violence. One writer said: “State of JNU mirrors the State of India”.

Now, we have Ramjas College where Umar Khalid was invited to speak on the “Culture of Protests”. ABVP went “berserk”. Khalid was charged with sedition. Since when did a person charged with an offence (albeit sedition) lose their right to speak before they were tried and found guilty? Who is the ABVP to silence them? Think of accused politicians. Even your right to speak from prisons cannot be halted.

Some 50 ABVP activists, rampaging violently stopped the seminar. The silent protest against ABVP was thrashed by them, and even the right to go to the Maurice Nagar Police station to register a complaint was met with violence. The seminar was cancelled as anti-national and seen as offensive.

Even the brave and plaintive voice of Gurmehar Kaur (a martyr’s daughter) that she is not afraid of the ABVP was met abrasively forcing her to withdraw her statement. She had a greater emotional right to address the issue of nationalism democratically than her uncontrolled evil detractors. 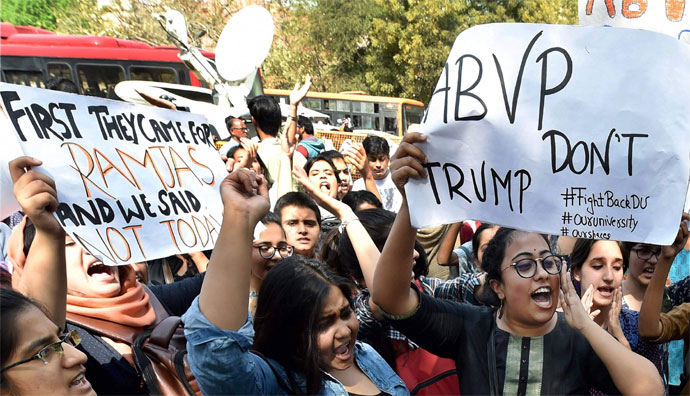 The integrity and autonomy of universities is a part of free speech. Just as politicians in legislatures are protected in their speech, the right to discourse is protected in a university. It does not matter how provocative the discourse is. Exchange of ideas, howsoever uncomfortable, is what a university is about.

The very character of a university would be lost, if speech or the desire for speech is met with violence. This does not mean that the right to protest is lost. Those against an activity may protest non-violently by demonstration; and modern technology instantly carries the message. But brutal violence can never be the answer.

What is true of campuses is also true of any speech. Within the campuses or otherwise, the right to non-violent counter demonstration is always open to a speech act, exaggerated by technology’s overdrive. The Supreme Court quoting Voltaire says, “I disapprove of what you say, but I will defend to the death your right to say it." That is the spirit of discourse.

The wise sage Justice Krishna Iyer in the Periyar Ramayana case observed: “Even today, here and there, these diehards (read ABVP) may be found in our country who are offended by... writings, but no government will be antediluvian enough to invoke the power to seize... writings because a few fanatics (read BJP/ABVP) hold obdurate views on them”. This applies to all speech or speech acts.

What the government is doing now is to use the power to prosecute for “sedition” in universities and elsewhere. The moment I want to speak unfavourably on Kashmir, I am a treasonable seditionist. If I oppose government policy on Kashmir and speak on autonomy of Kashmir, I am worse than a terrorist.

Government's use of sedition

ABVP’s cohorts would disrobe me of my right to speak by threatening violence. They decide what my speech agenda is. Remember, in Delhi, the police comes under the Centre’s home ministry. This is part of those “mini-structures” and “mini processes” of governance.

And, the present government has revived the offence of sedition in ways reminiscent of how the British Raj which punished the best Indian voices for liberation. In those days, the freedom movement thought “sedition” was a honourable offence. In independent India, it is a not-to-be-used dishonourable offence.

Indeed, in the Kedar Nath case (1962), the Supreme Court frowned on the savagery of the Privy Council’s interpretation; and ruled to make sedition an intentional "law and order" offence. Now the pathology of state and ABVP practice takes us back into the imperial past where sedition was an instrument to impel silence.

We are back into a freedom struggle again. We live at a time of violent absolutism which already plagues us in more ways than one. The BJP government is hand-in-glove with its reckless but motivated ABVP. A counter-revolution is overdue.

Also read: Why we need to worry about ABVP's 'nationalism'

#BJP, #Ramjas, #ABVP
The views and opinions expressed in this article are those of the authors and do not necessarily reflect the official policy or position of DailyO.in or the India Today Group. The writers are solely responsible for any claims arising out of the contents of this article.