Piecing peace together: Why calm in Afghanistan is not just a dream for Hekmat Khalil Karzai

Former deputy Afghan foreign minister Hekmat Karzai discusses the Taliban’s take on peace, how America should withdraw troops and how he moved on from the deep despair of his brother's killing.

Hekmat Khalil Karzai has enough reasons to have nothing to do with the Taliban.

Almost five years ago, a suicide bomber killed his only brother, Hashmat Karzai, in his home in Kandahar — and then boasted about what they saw as an "achievement".

Former deputy Afghan foreign minister, Karzai, understands the wisdom in William Shakespeare's words "Blood will have blood." He also knows that at some point, the never-ending cycle of bloodshed and despair has to be brought to a halt — that’s why he was prepared to lead his country's delegation in the first face-to-face talks with the Taliban in July 2015 and at the Quadrilateral Coordination Group meetings involving his country, Pakistan, China and the United States, to focus on creating an enabling environment for the peace process.

“I have met with the Taliban on several occasions, at least four to five times recently in Doha, and at a few other places — and I see in their eyes that there is a desire on their part for peace, too," Karzai tells me when we met at his office in Kabul. “On a daily basis, we are losing around 50 young men in the security forces. Similarly, on the Taliban side, they are losing probably more. We are all tired of the bloodshed.”

Karzai, in person, is a bookish, humble man and on his simple office table, there is just a laptop, a notebook and a pen.

He has, among other academic qualifications, a Bachelor of Arts in political science from the University of Maryland and a Master of Science in Strategic Studies from the Institute of Defence and Strategic Studies, Singapore. He has seen a great deal of the world — and the best and worst in his fellow men — but his sense of optimism remains wonderfully intact. 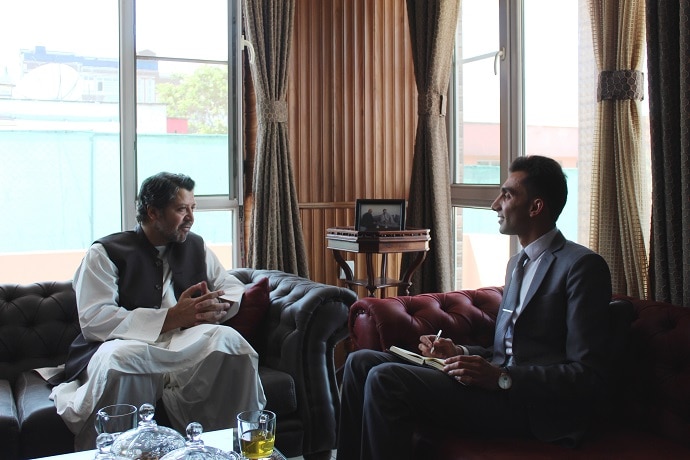 I don't think any of us Afghans like the idea of foreign troops being in our country. We are a very proud people and none of us like to be dependent on foreign troops. We need to come to an agreement with the United States on their departure — but that departure has to be conditional on the Taliban agreeing to sign up to peace, the Afghan people being satisfied with any agreement reached and all the other actors involved being signed up to it, too, he feels.

Of the latest phase in the peace negotiations with the Taliban, he says, “This time, what inspires me is the commitment from many different actors to peace. I feel that the United States is committed to peace and to a political settlement in Afghanistan, and I am confident that with the right attitude on all sides, we can move towards a political agreement which will ensure that Afghans can once again live in peace. This has taken a very long time to achieve but this time I sense we are closer to it than ever.”

These ‘actors’ include, of course, India whose development assistance to Afghanistan has exceeded $ 3 billion and it is expected that bilateral trade will further benefit Afghanistan with the opening of an air cargo route between the two countries.

Karzai sees India as a "true friend" to Afghanistan — but wonders if it will alone be able to fill the vacuum that will be left when, and if, America withdraws. Standing By: India has proven to be a key player in the mission to rebuild Afghanistan. (Photo: Reuters)

“India is an important partner and has contributed in so many different ways to Afghanistan and I don’t doubt for one moment its people's goodwill or positive intentions, but I just think it will take more than one country — no matter how great — to fill the enormous gap that will be left if the US departs. I am absolutely certain that whether the Americans leave, withdraw or stick around, India is going to stay our friend and it will remain engaged in a variety of ways. Long term, we will want to have India involved in the peace process," he says.

Having previously worked a great deal with India in forums and meetings regarding the Afghanistan peace process, he says, “India has always participated in different regional engagements, whatever process we have had. India was one of the critical components of the 6+1 process on Afghanistan, which consisted of our representatives talking to all of our neighbours plus the United States.”

Extremely productive discussions and Partnership Council Meeting with the senior leadership. Thanks India for the warm hospitality. pic.twitter.com/twsRbp8C1N

There is great anxiety among ordinary Afghans about the scale of the challenge that lies ahead if President Trump makes good on his intention to withdraw his troops, but Karzai, typically, is optimistic. “Afghans should not be worried and concerned. We should be able to find our own way, we have to create our own solution and only then can we achieve our full potential. Right now, all of us seem to be under the impression that if America withdraws, this great country of ours will somehow fall apart and collapse. If the Americans plan this properly — as I say, ensure that all the elements are in place for there to be peace after they leave — then I am sure the transition will be smooth. Of course, if they leave abruptly, without planning, that would be a very different matter."

The current daily reports of terrorist incidents in Afghanistan are not, as he points out, what anyone wants and it is in the interests of the country that a new way forward is found. “We are a nation that has suffered enormously and continues to be in pain, but, you know, we come from a very rich culture, a rich history, and we are very honourable people and regardless of this turbulent time in which we live, we will of course prevail,” he says.

If I have regrets, he muses, it is that we couldn't have made more of a success of the national unity government which was established in 2014 when President Ashraf Ghani and Dr Abdullah shared power. The agreement will end in one month — I think it could have achieved so much more. An Uncertain Road: There is anxiety among Afghans about challenges ahead, should President Trump withdraw American troops. (Photo: Reuters)

Karzai himself has always made it a point of being prepared for all his meetings and acting professionally. He takes enormous pride in representing Afghanistan.

He wryly recalls how, immediately after 9/11, he found himself re-establishing Afghanistan's embassy in Washington. "The place was in a real mess when I walked in as the US had not recognised our country during the Taliban's period in charge. We had to formally receive the embassy back from the Americans and I ended up in an office where the pipes had been broken and it looked like a mini swimming pool. We had to start pretty much from scratch — but we ended up being quite active in Washington because it was the time when Afghanistan was the sweetheart of the West and somehow we all turned it into a professional operation and we were proud of what we managed to achieve."

"Still, it is often the smallest acts that have made me happiest. There is no greater joy to be had than seeing in somebody’s eyes that you have somehow changed their life for the better. I think that joy defines us as a human being and it gives meaning to our lives. We shouldn't maybe fret all the time about changing the world — if we can first make just one person's life better, then that's a great start,” he concludes.

Also read: Letter from Kabul: Why India can be a great role model for Afghanistan

Post your comment
#Afghan economy, #Donald Trump, #Hekmat khalil karzai, #Taliban peace talks
The views and opinions expressed in this article are those of the authors and do not necessarily reflect the official policy or position of DailyO.in or the India Today Group. The writers are solely responsible for any claims arising out of the contents of this article.