Neither development is really funny but freedom of expression should be paramount.

Yet another FIR has been lodged against the comedy group All India Bakchod, AIB – this time by Mumbai Police’s cyber cell. AIB have received official ire after their tweet showing a lookalike of Prime Minister Narendra Modi in a Snapchat dog-filter, accompanied by the hashtag #Wanderlust, ostensibly a dig at the PM’s all-too-frequent foreign visits.

While AIB has been trolled by “Modi bhakts” for posting the tweet (which they have since deleted), the comedy group has also faced flak from Congress members and supporters for actually removing the post. This double whammy has brought out a number of fault lines in India’s fractured free speech debate, complicating its already weak freedom of expression narrative, and the limits of civil decency while critiquing public figures holding high offices such as the prime minister’s. 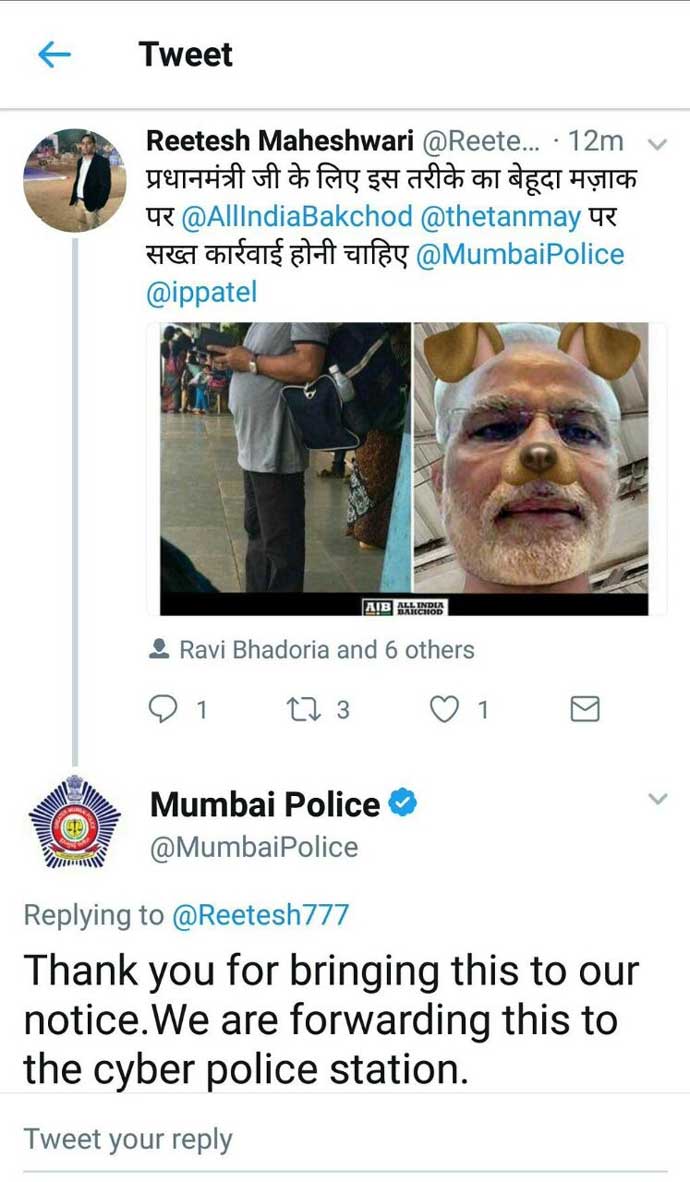 2 yrs ago I went to police to know my options re: online sexual harassment. Was told cyber cell is inundated, unlikely to take action. Well. https://t.co/54Vh4PYc6X

So Mumbai police laughs off a woman's complaint that a man masturbated at her, but thinks AIB's jokes are serious enough to take action? https://t.co/IyYkjRewc8

This is @AllIndiaBakchod style of FoE But why blame them when we have enough "Cool Dudes" in India who clap on such SHIT jokes pic.twitter.com/odEhiZTvoE

Modi trolls aside, the locking of horns with Congress members spelt out a different side of the debate.

Good change of pace today. Butthurt congresstards for once. Come come. Been a while since you lot felt relevant I guess.

At least not COWARD & Hypocrite like you all at AIB. Relax, Rohan! The rhetoric isn't going to build a spine for you. Please keep crawling! https://t.co/vaKhu21Dbg

Yes, your right to upload & remove content. The issue, if you ever realize @mojorojo, is with your false equivalence.

It's about how knowingly ignore the difference between right & wrong. The approach of dispensations. Present & former.

Nevertheless, you guys at @AllIndiaBakchod can make as many jokes on Congress, now & in future and be assured, you'll never be hounded. ??

AIB’s Tanmay Bhat tried playing it cool and batting for the right to delete and say funny stuff again.

Which brings us to the question of humour, genres of comedy, India’s increasingly volatile public sphere and the curbs on free speech, question of public decorum and crossing the Rubicon of civility, as well as evolution of public sentiments and the importance of taking a stand by artists, creative fraternity when faced with backlash.

The case of AIB is interesting because here are a bunch of young men turning comedy into an art form in India, which has long forgotten its illustrious history of ribaldry and court-jesting. However, even as AIB creates comedy fusing Indian icons such as Sachin Tendulkar and Lata Mangeshkar and making a video that’s as hilarious as it’s offensive to some who take nationalism way too seriously that needed, the question remains if they should stick to their posts and not delete them under public pressure.

FIR was lodged even when AIB remixed Sachin with Lata, and soon even that post was taken down. But in the digital marketplace of ideas and memes, where every outrage has its attendant swarm of jokes, where by or at AIB, no post really vanishes. Of course, screenshots of AIB’s Snapchat dog-fliter joke on PM Modi still remain, and are flooding the social media as we speak.

That said, we need to ask the question if AIB should have kept the tweet and not deleted it, given that they haven’t had the need to take off any such tweets on say Congress vice-president Rahul Gandhi, or even an Arvind Kejriwal. Why then the differential treatment to PM Modi when it comes to taking a dig at his #Wanderlust and a hotchpotch of foreign policy?

As Tanmay Bhat spells it out, the comparison with US comedy veteran Jon Stewart is a tad unfair because this is not the USA, where the First Amendment protects individual freedom over and above even the national flag. That said, we must also focus on whether or not AIB anticipated the overreaction and even the FIR, given they were targeting none other than the Prime Minister of India himself.

There’s always an element of publicity stunt when it comes to poking a quickie of fun at the establishment, but not standing by it once the water crosses the threshold.

While freedom of expression is certainly paramount, and the FIR must be condemned – it’s practically illegal, since it doesn’t stand the scrutiny of legal standards, and it’s hardly derogatory or defamatory – we should also introspect if this shoot-and-scoot style of comedy has any merit, or substance or even larger relevance in furthering the conversation beyond trapping it in the usual framework of encroaching into AIB’s freedom of expression.

In this regard, it’s important to bring in what comedian Varun Grover said in response to a Congress spokesperson’s allegation that Rahul Gandhi is an easier target than PM Modi.

The video is online. There were jokes on Arun Jaitley, Kejriwal, Amit Shah, Bal Narendra book, and my own life too. So stop playing victim.

And credit where due - I did bring up the joke on Congress to point out how the BJP govt. should ALSO have a sense of humour like UPA did.

Here’s the video of the comedy sketch by Varun Grover, presented by India Today Conclave 2016, and it’s indeed a powerful piece of political humour.

Which brings us to the question: is there an arbitrariness on the part of authorities as they come down on dissent or humour or criticism? Yes. Varun Grover’s powerful comedy, equally offending every one of the political luminaries, might have slipped under the radar, or intentionally overlooked, because he said what he said at an event organised by a media house of considerable influence. India Today is as much responsible for that sketch as Grover himself, and therefore his wasn’t an easy instance to make an example of by the authorities.

On the other hand, a loose, slightly forced and blasé tweet from the AIB, laced with what many call the “millennial humour” – such as spelling “life” as “lyf” – is a relatively easier, softer target. AIB are now big as they hobnob with the likes of Shah Rukh Khan and Karan Johar, as they indulge in a mutual appreciation society of reciprocal coolness. That “coolness” goes under- or unappreciated by the swarm of Modi-loving trolls, as well as many in the BJP party leadership, to the extent that the Mumbai Police cyber cell feels compelled to lodge an FIR.

Of course, this points to one more low in our public sphere, where a silly comment, no matter how tasteless, gets unnecessary official rebuke and action, leading to harassment of the comedians. But the AIB must also introspect whether their brand of comedy is really anything beyond a smart-alecky, spit-and-scoot cleverness that cannot withstand the repercussions of its own “free speech”.

Nevertheless, the bottom-line is simply this: AIB have all the right to post what they posted and also delete it later. There’s no law breached there. The breach is solely in the official overreaction. The only question that is unsettled is this: can AIB develop a brand of truly sharp political comedy beyond riding the momentary hipness?

Also read - Bad doggy: When AIB got trolled for a Modi meme it quickly deleted