Perform or perish Air India, but spare the passenger

Last week a disabled passenger alleged that she was forced to crawl on New Delhi airport's tarmac after Air India failed to provide a wheelchair when her plane landed. The airline denied the allegations.

In December 2015, a London-bound flight with more than 200 passengers was forced to return to Mumbai after three hours in the air over a suspected rat sighting in the cabin.

A plane carrying 160 passengers was forced this month to return to Delhi almost 30 minutes into a Milan-bound flight after smoke was detected in the cabin.

If you have travelled by Air India in the recent past one or more of the following things must have happened with you (if not, you should thank your stars).

1. Frequent changes in flight timings after booking the ticket

If you then cancel your ticket because the new time doesn't suit you, normal cancellation charges would apply. This is bizarre!

2. Flight delays without any plausible explanation

The standard reason for flight delay in winters is fog, and in summers, incoming flights being delayed. Sometimes they don't have crew to run a flight and find other excuses.

This has become a rather annoying feature. Boarding gates for Air India flights are frequently changed. This is also a reflection of its lowest on-time performance in the domestic industry. Since you are not on time, you don't get preference for your slotted gate as it goes to another carrier.

Imagine you reach the holiday destination but your baggage doesn't. Think about the inconvenience. You need to go shopping before checking in at the hotel!

The most disturbing aspect of all this is the sheer contempt and "sarkari" behaviour of the Air India staff. They have not been trained ever, I believe, for handling customer sensitivities. They don't seem to believe in the adage "customer is king". They don't behave as if they are employed in a service industry. They fail to understand that the company is running on taxpayers' money and they get their salaries because of us.

On top of this, we hear about frequent flight delays to allegedly accommodate VIPs who arrive late (incidents involving Union minister of state for home Kiren Rijiju and Maharashtra chief minister Devendra Fadnavis are a few examples).

What has happened to our "Maharaja", our national pride? Why is it ailing and can it hide its inefficiencies on the pretext of having being forced to work towards achieving social objectives of the government? Is it time to put curtains to this airline or make it an exclusive airline just for government and politicians? Then the government can use it according to its own will and not cause problems for general public. Let's analyse the problems that Air India faces, a recent silver lining and possible solutions.

Five reasons to show the company is indeed in deep trouble:

Indian Airlines (national carrier operating in the domestic sector) and Air India (national carrier operating in the international sector) were merged in 2007. In April 2012, the government approved a Rs 30,000-crore package to bail out the state-owned airline, including an upfront equity infusion of Rs 6,750 crore and assured equity support of Rs 23,481 crore till 2020-'21. It also approved the restructuring of Rs 21,348 crore short-term loans into long-tenure debt.

The chart below depicts the pathetic financial position of the "Maharaja". Losses have widened from Rs 2,200 crore in FY08 to Rs 5,500 crores in FY15. The entire equity has been wiped off despite fresh infusion of Rs 20,700 crore in the last eight years (out of Rs 30,000 crore as above).

Air India is not even recording operating profits (before depreciation, interest and tax), simply meaning that it has been continuously spending more than what it earns. It's working capital is negative at a staggering Rs 22,300 crore. Borrowings have more than doubled to Rs 43,700 crore to fund the losses and working capital needs. The company is essentially surviving on taxpayer's money. And we have been funding the inefficiencies of a public sector unit for years now. This is clearly an indication that it is not the preferred airline for customers. Is it because of higher price of tickets? Not really! In spite of being a full-fare airline (serving food/snacks) its prices on any route are similar to those of low-cost airlines.

3. Lags behind peers on performance indicators

Not only is Air India struggling in terms of its financials and market share, its performance indicators leave a lot to be desired for the month of November 2015. Air India's on-time performance was worst among peers at 73.1 per cent. The highest number of passengers impacted owing to flight delays, cancellations and denied boarding across airlines were those of Air India. The carrier accounts for almost half of the industry-wide number. Its passenger load factor is marginally better than that of Jet Airways at 81.7 per cent but lower than others. 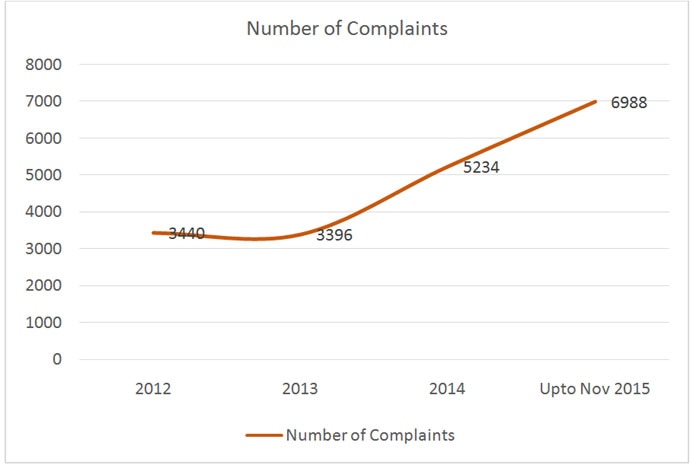 On cost metrics, the airline is a disaster. In 2014-'15, The sum total of employee cost plus interest payments added upto 36 per cent of revenue, the next airline in terms of costs and expenditures was Jet Airways. In order to reduce debt and interest costs, the airline sold nine of its Dreamliners late last year and leased them back. While debt have come down a bit, the accumulated debt and losses mean that it will be a long way before the airline can be in a comfortable position.

4. Loses money on all international flights but two

Air India was rated as the third worst airline in the world in 2013 by a website that monitors air crashes around the word. In 2015 it was ranked 59th out of 60 airlines by the reputed Hamburg-based Jet Airliner Crash Data Evaluation Centre (JACDEC). Jet Airways was ranked 34th - much higher than Air India.

It flies the oldest A-320s in the world (nearly 26 years-old). Earlier this year, it had landing gear problems in one of its flights and had to make an emergency landing. Last month, an Air India engineer was sucked into the engine in a fatal accident and lost his life.

Across the top four airlines in India, avherald.com recorded the highest number of incidents as a proportion of fleet size for Air India. This was almost twice the next airline SpiceJet. The market leader IndiGo reported ten times fewer incidents per plane than Air India. Indian Airlines and Air India were merged in 2007. The Air India brand name was retained. The rationale for the merger was detailed in the Annual Report of 2007-'08 in a long sentence comprising 64 words.

"It was felt that in an increasingly consolidating global aviation environment, where critical mass/size is a key factor, combining the two state owned airlines into a single merged entity would better equip them to survive and prosper amidst fierce global and domestic competition as it would provide an opportunity to leverage combined assets and capital better and bring a stronger sustainable business."

Nothing seems to have worked in its favour as anticipated. In its first year of combined operations the new entity was supposed to record profits of Rs 1,000 crore. Instead, it has been making losses of thousands of crores of rupees each year. The consultant and previous civil aviation minister are squarely to blame.

Parliament's committee on public sector undertakings (PSU) has stated that the government had blundered by merging Air India and Indian Airlines. It recommended fixing responsibility on agencies and individuals that took the whimsical decision. The comptroller and auditor general (CAG) also described the merger as ill-timed and said the exercise was taken "strangely from the top rather than by the perceived needs of both these airlines". But nothing has been done on this front as yet.

Can recent silver linings help it recover and earn money on a sustainable basis?

1. Operating profit to be recorded in FY16 due to low crude oil prices

Low crude prices are expected to allow Air India to post an operating profit of Rs 6 crore in FY16 according to the ministry of civil aviation. However, this is not sustainable and may not present the true picture. What is important is to see if this can be maintained if oil prices increase from present levels.

Air India has reduced its employee to aircraft ratio from 265 in 2012 to 108 in October 2015. This is now comparable to global peers like Singapore Airlines (100), Lufthansa (127) and Jet Airways (130). However, this is more of a jugglery as 12,000 employees have been shifted to newly formed subsidiaries - aircraft repair and ground handling - and on a consolidated basis are still part of Air India.

Air India's PLF improved to 86.7 per cent in December from 81.7 per cent in November 2015 mainly due to the festive season. All airlines record an increase during this season and it remains to be seen whether Air India can maintain it in the new year.

Is it time to sell the carrier off (disinvest), or continue supporting it in the hope of recovery sometime in the future? This is a tough call to take.

This is an option. Airlines confident of turning around its operations can make a bid for its assets/routes. It is debatable though whether it's the correct time to sell when company is making losses as correct valuations may not be fetched.

2. De-merger of Indian Airlines from Air India and creation of two entities like before

Eighty per cent of the money lost by Air India is on international operations. The rationale behind the merger was wrong. Indian Airlines was still recording operational profits when it was merged. It had a better brand recall and service quality than Air India. This way we can save at least one of the airlines.

We can give the company another four-five years to pull up its socks, failing which it may be let to perish like any other market player (Kingfisher Airlines). We should take a pledge not to provide any additional support to Air India apart from the Rs 30,000 crore package already announced and discussed above. If it can't turn around, it better be sold off or its operations stopped. If it can't make money in a low oil price environment, then it never will.

Given that load factors are at a reasonable level, the airline can increase its revenues only by a few percentage points. It will need to find a way to cut down on employee costs as without that, the airline will take a long time to reach a comfortable level of profitable performance. However, given the government's track record with loss making PSUs, it is unlikely that tough action on the employee front is on the way.

To sum up, PSUs have the responsibility to fulfil socio-economic objectives of the government. Of course, Air India cannot fulfil its economic objectives as it doesn't make money and can't pay dividends. On the social side it does ply on non-profitable routes on which no private airline wants to fly, but this is negated by its poor service standards.

Passengers don't care whether Air India survives or not, they care for a better flying experience. There will be bit of a shake up if it's sold or stops operations but the market would eventually normalise. Time has really come for Air India to perform or perish!

#Indian Airlines, #Civil Aviation, #Air India
The views and opinions expressed in this article are those of the authors and do not necessarily reflect the official policy or position of DailyO.in or the India Today Group. The writers are solely responsible for any claims arising out of the contents of this article.