To put it bluntly, this was a vote of no confidence, not merely towards the mainstream political parties, but also, horrifyingly, towards Indian democracy.

The ascent of the Modi government at the Centre brought about a significant shift in India's Kashmir policy, influenced to a large extent by the policy prescriptions of the new national security adviser Ajit Doval.

The Doval doctrine is essentially an aggressive assimilationist strategy, whose twin features were an embrace of aggressive power in controlling Kashmir, coupled with a steadfast resolve to deny any political dimension to the Kashmir problem.

The abysmal voting turnout of 7 per cent in Sunday's by-polls, the lowest in three decades, is the clearest evidence yet of the failure of this doctrine. The Doval doctrine was manifested in its starkest form last year, when the government gave a free hand to security forces to brutally put down protests in the aftermath of Burhan Wani's death.

The sweeping crackdown killed 80 people and blinded hundreds through the use of pellet guns, which were not withdrawn even as casualties kept mounting. Along with this exercise of uninhibited power, the government dismissed demands for political engagement with Kashmiris, maintaining that the Kashmir problem was solely a security question and not a political question.

The crackdown, in line with the Doval doctrine (grasped from his YouTube lecture), was intended as a "shock therapy" to rewire Kashmiris into adjusting their expectations and to force them into reconciling to assimilation.

It is now clear that this hardline, and misguided, policy of repression without engagement has not only failed to break the resolve of Kashmiris towards "azadi", it has in fact reinforced it. The collective punishment wreaked by the Doval doctrine in practice has further inflamed the sense of injustice felt by Kashmiris, alienating them further from India, and it's democratic process.

The lowest voter turnout since the anti-India insurgency began in the late 1980s is ample evidence of this fact. The voting percentage in the Srinagar Burhan constituency declined precipitously from 26 per cent in the 2014 Lok Sabha polls to 7 per cent, even as eight people died in police firing, including a couple of school-going kids, while no one had died the last time around.

To put it bluntly, this was a vote of no confidence, not merely towards the mainstream political parties, but also, horrifyingly, towards Indian democracy.

Most of the prime time news anchors, who have consistently stereotyped and dehumanised Kashmiris, whitewashing their suffering with their hyperventilating jingoism, virtually blanked out the news.

Times Now, the leader of the jingoist pack, didn't deem the death of eight Indian civilians - or the abysmal poll numbers - newsworthy enough even as a passing reference.

Although it will, no doubt, continue to hold unending hours of shouting matches to resolve why Kashmiris don't love India, without a sense of irony, let alone scruples.

The jarring silence of the hyper-nationalist blowhards, with their blinkered security obsessed visions, spoke volumes of both their intellectual and moral bankruptcy on the issue of Kashmir.

This electoral rebuff threatens to blow over the already fading veneer of democracy in Kashmir. Democracy, properly understood, is more than mere elections. To be substantive, it has to be underpinned by the rule of law and fundamental rights, both of which have long been elusive in Kashmir.

The rights of Kashmiris, for more than two decades, have been severely circumscribed by draconian laws such as AFSPA and Kashmir Public Safety Act, and the liberal use of Article 144 of CPRC (banning assembly of more than four persons).

This means in practice, that every Kashmiri risks being harassed, detained, or even killed at mere suspicion, and with alarming impunity. The civil liberties of expression, movement and peaceful assembly are frequently denied, all within the ambit of law.

The fragility of the rule of law can be gauged from the fact that State actors are rarely held accountable for allegations of extrajudicial killings, excessive force and torture.

In the absence of an illustrious record on human rights and rule of law, regular elections with healthy participation provided an indispensable shield to deflect criticism and keep up the illusion of meaningful democracy. 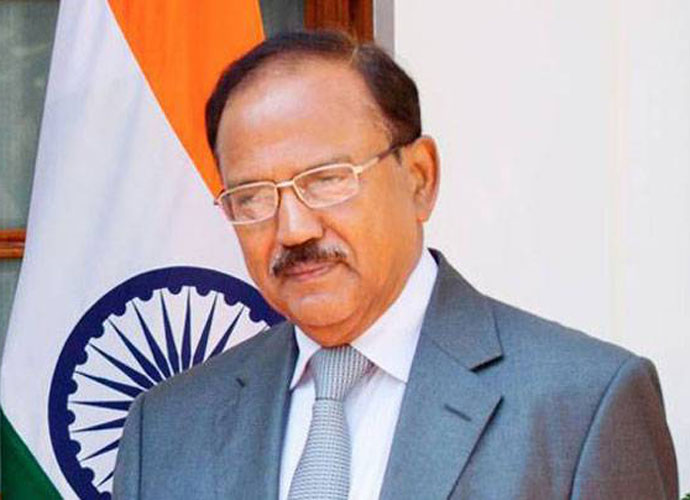 The Doval doctrine is essentially an aggressive assimilationist strategy, whose twin features were an embrace of aggressive power in controlling Kashmir, coupled with a steadfast resolve to deny any political dimension to the Kashmir problem. Photo: India Today

That shield now stands broken, the trust of Kashmiris in mainstream politics has reached junk status, and the whole credibility of the political process has been dangerously frayed.

The popularity of mainstream leaders in Kashmir is at an all time low. This collapse of credibility can be gleamed from the fact that while upwards of 2,00,000 people turned up for the militant Burhan Wani's funeral, the funeral of three-time CM Mufti Mohammed Sayeed drew a paltry 5,000 people, many of them party workers and government officials.

The current by-election involved the leader of NC, Farooq Abdullah, yet it couldn't rouse even a tenth of the electorate to the polling booth. As far as the PDP is concerned, their alliance with the BJP has gravely discredited them, in fact the epicentre of the 2016 uprising was in their stronghold of South Kashmir, with many of its legislators afraid to even go back to their constituencies.

This implosion of the middle ground in Kashmiri politics has further strengthened the hand of separatists. The issue of "azadi" or political freedom, championed by separatists, now dwarfs other issues of governance, pushing mainstream parties into irrelevance.

Militancy has largely subsided in Kashmir, compared with the dizzying levels recorded in the 90s. The new normal in Kashmir is periods of explosive unrest followed by an eerie calm. This intermittent peace, though, is the peace of the prison-yard, enforced by guns and armoured vehicles. The powder keg of pent up rage, however, is always smouldering underneath, never far from bursting into yet another spasm of protest and reprisals.

If we are to salvage our much hallowed democracy in Kashmir, we must start by having an honest conversation in Kashmir. An example is the refreshing candour showed by Mr Doval's predecessor MK Narayanan who, writing for The Hindu in the midst of last year's protests, acknowledged that the unrest in Kashmir is a “home-grown” popular uprising which cannot be blamed on Pakistan or outsiders.

It's vital that we acknowledge that there is no military solution to Kashmir, only a political solution, reached through a meaningful dialogue.

And, no, a political solution does not necessarily translate into "azadi", it can mean a host of things ranging from more autonomy to the state to run its affairs as promised in Article 370, to a gradual rollback of the overarching militarisation of Kashmir, to more accountability for human rights violations.

If, instead of offering the Kashmiris this meaningful political engagement, we continue to rely on the military and its blunt instrument of repression, or resort to vacuous catchphrases such as "choose tourism over terrorism", we risk losing a whole generation of Kashmiri youths to political alienation, or worse militancy.

The veteran journalist Kuldip Nayar observed many years ago, “When it comes to Kashmir, the conscience of most in the country becomes dead.”

The Srinagar by-polls turnout reminds us once again that we must jolt our democratic conscience back to life, if we want to keep calling ourselves the world's largest democracy.

#Bypoll, #Kashmir, #Ajit Doval
The views and opinions expressed in this article are those of the authors and do not necessarily reflect the official policy or position of DailyO.in or the India Today Group. The writers are solely responsible for any claims arising out of the contents of this article.