MP’s Very Own Batmen: Why entitled sons of politicians think they can get away with anything

Kailash Vijayvargiya’s son Akash Bijayvargiya assaulted a municipal officer with a bat and got a lot of backlash for the same, deservedly so. Hence proved, entitled and privileged politicians can stoop to any low.

The sons of two top BJP leaders from Madhya Pradesh have been in the news for the wrong reasons. On June 18, Union Culture and Tourism Minister Prahlad Patel’s son Prabal was arrested on charges of attempt to murder in Narsinghpur. On June 26, Akash, the son of BJP General Secretary Kailash Vijayvargiya was arrested for thrashing a municipal official in Indore — with a bat. While the charges on Patel’s son escaped media scrutiny, Akash received tremendous flak in the media as he had been captured on camera assaulting the official with a bat. Do the actions of both kids of powerful fathers suggest a pattern? Well, yes and no. 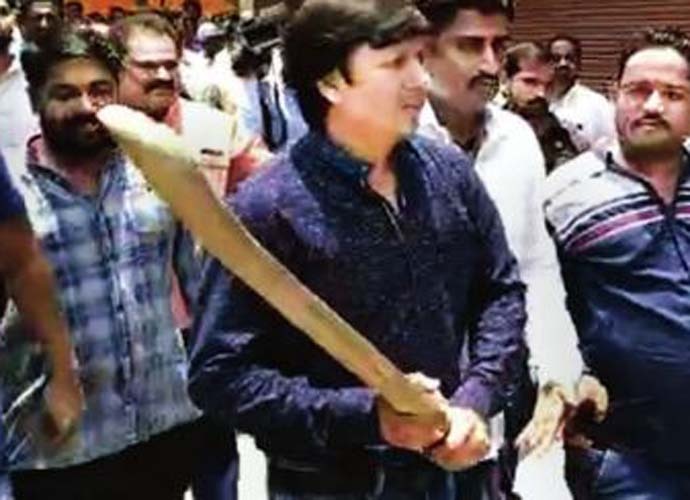 While a number of members of Prahlad Patel’s family, including his MLA brother Jalam Singh and his nephew Monu, have many criminal cases against them, Akash’s actions came as a surprise to political watchers in MP. Akash claimed he was upset that a house designated as dilapidated was being pulled down by the municipal body even when it was not. He claimed all this was being done as part of a conspiracy between municipal officials and a local minister. He tried to reason with municipal officials but when they did not relent, he got angry but doesn’t remember what happened.

When TV crews asked for his version, he said he would teach the officials a lesson. ‘Pehle aavedan, fir nivedan fir dana dan’, was his refrain. Akash has seen agitation based politics from close quarters. His father, Kailash Vijayvargiya, is a product of this particular style of politics. Vijayvargiya senior cut his teeth in a similar way and built a reputation when he was an opposition leader. Vijayvargiya’s junior, perhaps, felt trapped in his father’s image. He was not happy with the soft spoken guy image he had acquired. All of us get angry, Akash. But hitting someone with a bat is a bit psychotic. Go for some anger management, perhaps? (Source: India Today)

There is something about politics in Indore that doesn’t allow anyone to be soft. The only problem is that he chose a wrong time for it. Kailash Vijayvargiya’s rise in politics is said to have been facilitated in some way by Digvijaya Singh who as CM gave him a long rope. With Kamal Nath at the helm of affairs in MP, things are different. The Congress government hangs by a thread and will not allow the BJP to get away with something like what Vijayvargiya junior did. He was arrested and sent to jail for 14 days, something he had clearly not anticipated. The district administration decided to take him on seriously. Also, municipal body employees were unanimous in their opposition to what Akash did. Akash’s actions are bound to have a negative impact on his father’s politics in Delhi too since it goes against PM Modi’s opposition to entitled children.

He won owing to Vijayvargiya senior’s famed political management. Will he be able to manage this one? Let’s wait and see.

Also Read: Because of their aukaat: Why the BJP will not take Kailash Vijayvargiya and his son Akash to task

#Kailash Vijayvargiya, #Vijayvarigya's son bat assault, #Akash assaults municipal officer, #Mp bat assault
The views and opinions expressed in this article are those of the authors and do not necessarily reflect the official policy or position of DailyO.in or the India Today Group. The writers are solely responsible for any claims arising out of the contents of this article.