How Amar Singh crippled Samajwadi Party to work in his favour

Playing on his party chief Mulayam Singh's aspirations as also his brother Shivpal’s dreams of occupying the CM chair has paid off.

The goings-on in the Samajwadi Party have made it amply evident that Amar Singh was the “outsider” who Uttar Pradesh chief minister Akhilesh Yadav had referred to as the man behind all the trouble brewing in the family-ruled party.

An old hand at the "divide and rule" policy, Amar Singh has once again proved that he is a master of the craft that not only got him a re-entry into the party from which he was banished for nearly seven years, but also managed to cast such a spell on Mulayam Singh Yadav that the SP chief restored to him the status of national general secretary - the coveted post he was desperate to acquire.

Mulayam’s latent aspiration of wanting to don the mantle of prime minister came in handy for Amar Singh, who wanted to make him sign on the dotted line. Playing up Shivpal Yadav’s chief ministerial ambitions gave the trader-turned politician all the arsenal to ignite a war within the ruling family. It clearly suits Amar Singh best to have the son pitted against the father, the uncle against the nephew, brothers against brothers and cousins against cousins. 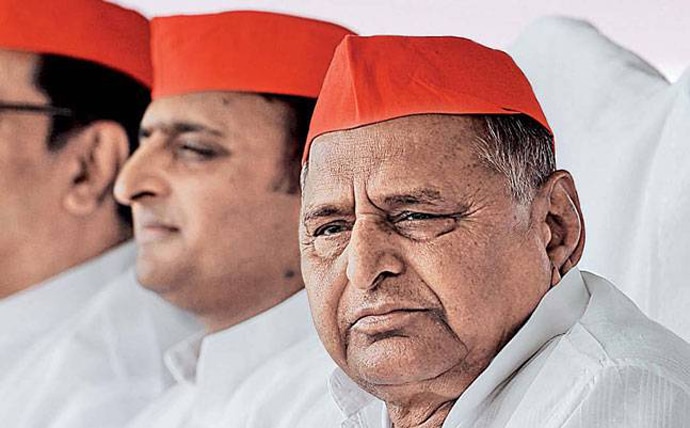 Perhaps Mulayam based his judgment on all the good times he had spent with Amar Singh.

The prelude to the game of machinations began a few months ago with Amar Singh making desperate attempts to regain a foothold in the party that had shown him the door more than six years ago. He began to be seen at various functions of the Yadav clan as well as the Samajwadi Party, thereby giving rise to media speculation about his imminent return to the party. That he was as much despised by the party’s rank and file, including certain key SP functionaries like chief minister Akhilesh Yadav, his uncle Ram Gopal Yadav and the all-powerful urban development and parliamentary affairs minister Azam Khan, was clearly borne out by the indifference with which he was treated by everyone.

It was too early for the top brass to forget all that Amar Singh had done during the years of exile to not only run down the party but also Mulayam, who was responsible for according him a political status that the former had used to carve a high profile for himself. Yet, Mulayam was ready to let bygones be bygones and give space to his one-time confidante with whom he had once shared everything. The SP chief’s family looked the other way whenever the idea of ushering Amar Singh in was mooted.

The reasons were not far to seek - Singh had not only marginalised each one of them, but also virtually monopolised the party. It was only after failing to get even a remote slot in any rival political party that he knocked at Mulayam’s door to gain re-entry. But the wily always find ways and means to sneak in.

Thus, it was no surprise when Amar Singh began baiting Shivpal, who he saw as the only vulnerable Yadav - and sure enough, it worked. The re-entry was formalised with the allocation of a precious Rajya Sabha berth to him, despite stiff opposition from Akhilesh, Ram Gopal and Azam Khan - who had also pitched in to stall the return of what he termed the “wheeler-dealer”.

What Amar Singh could easily exploit to achieve his goal was not just Mulayam’s soft corner for him, but also his playing on the SP veteran’s prime-ministerial aspirations as also on Shivpal’s dreams of occupying the CM chair. Some even attribute it to age disorders that lead to loss of recent memory and the intensification of older memory - perhaps Mulayam based his judgment on all the good times he had spent with Amar Singh.

It was therefore no surprise to hear Mulayam publicly singing the praises of Amar Singh at a time Akhilesh, Ram Gopal and Azam were busy defining him as the “outsider” responsible for a divide in the family. Explicitly justifying Amar Singh’s recent elevation as general secretary, Mulayam declared in Lucknow, “Amar Singh has been of immense help in my bad times, particularly in court matters where he is still helping us.”

It could be sheer coincidence that the announcement came barely two days before the apex court refused to entertain an application seeking the reopening of the disproportionate assets case against Mulayam and his family, and at a time when the Supreme Court is about to pronounce its verdict in the infamous State Guest House incident, involving an attack on Mayawati by SP goons in 1995.

He also did not hesitate to express lament over his own decision to install Akhilesh as chief minister in 2012. “If I had listened to Shivpal’s advice in 2012 and become chief minister myself, we would have got 30-35 seats in the 2014 Lok Sabha election, and I could have become PM,” he told party colleagues in the presence of mediapersons.

The hallucination of becoming PM apparently led Mulayam to overlook all the invectives employed by Amar for him as well as the party during the six long years he remained in exile. Mulayam also seemed to forget that Amar Singh was nowhere in the scene when the party rode to power in 2012.

He was also overlooking the fact that the unprecedented tally of 224 in the UP house of 403 seats in 2012 was largely attributed to none other than his son Akhilesh, who had managed to cast a spell on the UP electorate, not only as a youth icon but also as the torch-bearer of positive change. The then 38–year old did succeed in ushering the change he had promised to bring. He also established himself as a leader by taking new initiatives to put the state on the fast track. Akhilesh clearly emerged as the only credible face for the top job when the state was poised to elect its next government.

All he needed to do was to pull up his socks on the law and order front, which also needed tightening his grip over the actions of certain family members, whose undue interference had diluted the chief minister’s institution. It was at this juncture that Amar Singh pulled all strings to stage a comeback and puncture Akhilesh’s rising balloon. The "divide and rule" worked - by marginalising Akhilesh and his other vocal adversaries in the SP, the shrewd "outsider" has managed to restore his own political hegemony in the party.

With an emotionally weak and physically infirm Mulayam on the party saddle and an ambitious Shivpal in tow, Amar Singh had clearly hit the bull's eye and emerged as the sole gainer in a game that had left the Samajwadi Party strife-torn and crippled.

Post your comment
#Shivpal Yadav, #Amar Singh, #Akhilesh Yadav, #UP Assembly Polls
The views and opinions expressed in this article are those of the authors and do not necessarily reflect the official policy or position of DailyO.in or the India Today Group. The writers are solely responsible for any claims arising out of the contents of this article.