The chief minister has already done much of the BJP’s work to alienate non-Yadav and non-Dalit Hindus.

The first was to over-emphasise the Samajwadi Party’s traditional appeal to Muslims. This has set off a counter-polarisaition backlash.

Non-Yadav Hindu voters are increasingly disillusioned with the SP’s pro-Muslim tilt. Most people admire the development work Akhilesh Yadav has done, especially in the past two years. The roads in urban Uttar Pradesh are smoother, many villages get 18 hours of electricity, thuggish SP MLAs have been refused tickets, and anti-incumbency has been deftly off-loaded on uncle Shivpal Yadav.

And yet, across UP’s caste and religion fault lines, barring Yadavs and Muslims, the feeling in these elections, as the homestretch approaches, is that a “Hindu backlash” could upend Akhilesh. 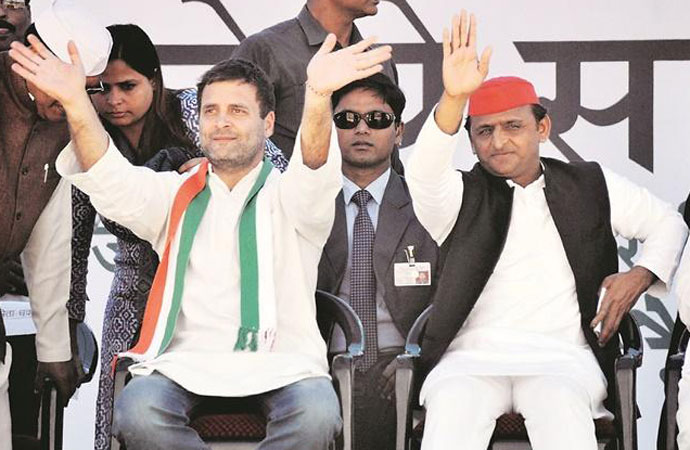 Akhilesh Yadav has made a huge mistake by allocating as many as 105 seats to coalition partner Congress.

The BJP has been accused of polarising the UP elections. And it has. But critics forget that UP was first polarised by the SP and the Congress.

Muslim polarisation is not what the middle-class English-language media likes to dwell on. The 1985-86 Shah Bano case was the Congress’ contribution to creating a communal divide in Hindu-Muslim relations, leading to a revival of the demand for a Ram temple in Ayodhya and culminating in the demolition of the Babri Masjid in December 1992.

The polarisation the Congress set into motion in 1985 was gleefully grasped by the BJP, then only a five-year-old party.

In Uttar Pradesh today, the same sequence is playing out. For decades the SP has used Muslim polarisation to supplement its Yadav vote bank and secure a voteshare above 30 per cent. Without the Muslim vote, the SP would get less than 75 seats in the UP assembly.

But just as the Congress went too far nationally as a party that appeased the Muslims, losing vast swathes of Hindu votes in the 2014 Lok Sabha elections, the SP has flogged its Muslim vote bank so hard for so long that fierce Hindu polarisation has set in.

The BJP only had to promise a ban on slaughter houses to deepen the Hindu-Muslim divide. The SP had already done much of the BJP’s work to alienate non-Yadav and non-Dalit Hindus.

A rainbow coalition of Hindus has now emerged in an arc from the non-Yadav OBCs and MBCs to Thakurs and Brahmins. Mayawati’s Dalit-Muslim vote base may not be enough to change the electoral math.

Writing in the Indian Express, Deeptiman Tiwary points out perceptively: “Brahmins, Vaishyas, Thakurs, Rajputs, Shakya-Kushwahas, Koeris, Dhobis, Mallahs and even Jatavs, all may agree that Akhilesh has brought in development, that he is a good man, But that may not translate into a vote for the Samajwadi Party. Instead, many of them say they will vote for the Samajwadi Party candidate only if they think he will deliver on local needs and expectations.

“It is a nuanced difference but a vital one. In effect it means that all Akhilesh has achieved after his very public spat with the party old guard, and rebranding himself, is to dent the anti-incumbency among his core voters. On the ground, there is little evidence to show that he has been able to swing the fence-sitters to his side in any significant way.  So a 26-year-old Ishan Bajpayee in Kanpur says he admires the work done by Akhilesh and is impressed by his dynamism. But the young hotel management graduate and cruise bike enthusiast doesn’t like the SP-BSP’s consistent Muslim pitch. He says he will vote for the BJP.”

As always, in UP nothing can be taken at face value, writes Tiwary: “At an Etawah tea shop, a Lodh Rajput voter says that it used to take more than three hours to reach Kanpur but now it takes just over two due to the roads built by Akhilesh. Jeetendra Yadav says that’s why all are voting for SP and despite the family feud the party will win. But when Yadav leaves, Rajput says his community has decided to vote for the BJP.”

The second error Akhilesh made was to allocate to the Congress as many as 105 seats. The original polariser, the Congress, now falls between two stools. Its erstwhile Muslim vote bank has lost faith in it and defected to the SP. Hindus, deeply resentful of its pro-Muslim bias, have deserted it for the BJP.

The Congress’ strike rate in these elections is therefore unlikely to be much higher than 25 per cent. Sensing this, Priyanka Gandhi has stayed away from active campaigning, confining herself to two token appearances in her family’s pocket borough of Amethi lest defeat tarnish her image as the Congress’ last trump card in the 2019 Lok Sabha election.

If the Congress ends up with just 25 seats, Akhilesh will need to win over 175 seats of the 298 the SP is contesting to secure a majority in the assembly. That represents a strike rate of nearly 60 per cent (175/298) and is improbable given the strong communal polarisation the SP-Congress ironically foisted on UP over the decades and which the BJP has cynically deepened during this election.

Even if the SP achieves a strike rate of 50 per cent in its 298 seats, it will end up with around 150 seats. Add the Congress’ 25 seats and the alliance’s tally of 175 will fall tantalisingly short of a simple majority.

Had Akhilesh held firm and allocated around 60-70 seats to the Congress, as he originally intended, leaving 340-odd seats for the SP, the alliance could still have scraped through. It might still do so, though the odds have turned against it in the second half of the UP campaign.

The dangers of excessive "minorityism" was underscored last week by the results of civic elections across Maharashtra. The Congress and the NCP’s Muslim vote bank has been split by small Muslim-only parties like the AIMIM.

The echo from Mumbai — and the rest of Maharashtra where the BJP last week swept the Opposition aside — may carry all the way into the heartland of Uttar Pradesh.

Also read: Does Modi's 'hung UP Assembly' remark show BJP is getting nervous?

#Akhilesh Yadav, #Uttar Pradesh Elections, #Assembly elections 2017
The views and opinions expressed in this article are those of the authors and do not necessarily reflect the official policy or position of DailyO.in or the India Today Group. The writers are solely responsible for any claims arising out of the contents of this article.