Does the Samajwadi Party need Akhilesh more than he needs it?

While I appreciate Mulayam’s courage to go solo to the polls, the fact of the matter is that his own party is not in one piece right now.

After visiting Akhilesh Yadav in February 2016 with an appeal to settle the Netaji mystery, I have been following the Uttar Pradesh politics with a keen interest. We had two specific requests for him — one, to construct a museum to store and display the belongings of one Gumnami Baba, who many thought was Netaji Subhas Chandra Bose in hiding, and two, to declare an inquiry into the identity of this baba.

I must confess that the Netaji matter was not making much news in UP when I and my fellow researchers and Netaji family members visited him. But Akhilesh surprised us by starting the work of the museum in the week after our meeting.

A few months later, he also announced a state-sponsored inquiry into the identity of Gumnami Baba, by drafting in (retired) Justice Vishnu Sahai. We thanked him immensely at the realisation that we were witnessing the “politics of the new”.

Akhilesh surprised us again when he gave the cold shoulder to a possible partnership with Quami Ekta Dal. He looked to ascertain that the future of UP politics was bright. But what transpired in the months that followed — the months leading up to the state elections — has been rather disappointing. Akhilesh appeared like someone who had to make a lot of compromises to continue as the chief minister to complete the formalities till the elections.

In comparison, the inquiry commission he appointed also only existed on paper at this time, making a lot of compromises on how it should have functioned.

From the “politics of the new” that I thought of, Akhilesh appeared to be going back to the Stone Age with his ties with an already depleted Congress in the state. Both he and Rahul Gandhi exchanged pleasantries in public speeches and gave all impressions of a partnership taking shape in the background. He even met Priyanka Gandhi in an attempt to march towards the magic number of 300 seats through the SP-Congress combine. 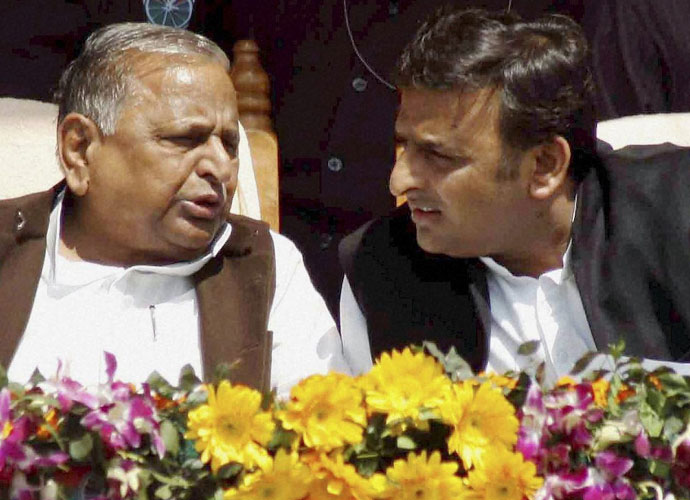 Mulayam thinks he can win solo whereas Akhilesh thinks a partnership with the Congress is the future. Photo: PTI

But he was losing whatever little grip he had on the party as the “modern Netaji” Mulayam Singh Yadav made his virat appearance to make it clear which faction of his family he favours. Mulayam’s announcement that the party would go solo to the polls was the hardest blow on Akhilesh’s nose.

Akhilesh had already lost the game before it even began. He was not involved in the allotment of party seats and his close aides were sure not to be on Mulayam’s official list. In an attempt to save face, he quickly released his own list of 235 candidates who would face the polls.

While I appreciate Mulayam’s courage to go solo to the polls, the fact of the matter is that his own party is not in one piece right now. Interestingly, it is also a clear indication that the state politics is totally unpredictable, even for seasoned politicians like Mulayam and Akhilesh — Mulayam thinks he can win solo whereas Akhilesh thinks a partnership with the Congress is the future!

Either way, the future the Samajwadi Party wants in the state is not the “politics of the new”, but that of the the tried-and-tested old schoolers. Yadav senior acts like a super chief minister with the backing of his family and Yadav junior is trying to walk back in time with a possible alliance with the Congress and an open fight within his party.

Evidently, the SP leaders are playing right into the hands of the BJP and BSP through their infighting in public. Two of BJP’s own decisions have all the potential to make or break its chances in the state, irrespective of what happens in SP. Through the surgical strikes, it gained considerable ground in the state, but the negativity around demonetisation might have invalidated some of that already. Therefore, the differences in SP that have now come out in the open, will only aid BJP’s chances in the state.

The future looks bleak for Akhilesh in his own party. He has the option to force the party seniors to go to polls with a balanced list of candidates, or quit to avoid embarrassment and go to the polls in his own capacity, or suffer all the hardships and linger on the political scene as a supporting actor in a subdued role.

Perhaps it is too late for Akhilesh to think of the options outside his own party. But if he does think that way, he will be splitting the SP vote bank, thereby strengthening BJP’s prospects even further. In a war to prove supremacy, Akhilesh would be the winner if that happens. Of all people, Mulayam would know that better.

Evidently, Akhilesh is one who has benefited from the nepotism that seems to be the cornerstone of his own party. Now the villain in his political life is also the same nepotism, which with its deep roots once favoured him. His future in the state is in a balance now, just like the fate of the inquiry commission he appointed at our request—searching in the dark for very strange reasons.

#Mulayam Singh Yadav, #Akhilesh Yadav, #Samajwadi Party
The views and opinions expressed in this article are those of the authors and do not necessarily reflect the official policy or position of DailyO.in or the India Today Group. The writers are solely responsible for any claims arising out of the contents of this article.