End radical terror in Kashmir: It's now or never

The country in particular and the world at large have realised there is no freedom struggle in Kashmir.

Terrorists have crossed the red line by targeting unarmed, innocent pilgrims returning from the Amarnath Yatra. By attacking them when they were returning from a sightseeing tour of Srinagar after the yatra is a double whammy. The message that has been sent out is neither pilgrims nor tourists are safe in Kashmir.

The fact that several high visibility terror attacks have been carried out in south Kashmir indicates that there is a larger concentration of terrorists – both foreign and local in and around Anantnag. Security forces say the main hub of terror in Kashmir is restricted to Anantnag, Pulwama, Shopian and Kulgam.

Whether it is the killing of Feroz Ahmed Dar, SHO Achabal along with his team of five policemen or targeting the Amarnath yatris, terrorists have used pockets in south Kashmir as a safe haven. Now village by village security forces must re-claim territory and hold ground to ensure the terrorists do not return.

There were intelligence inputs from June 26, 2017, that the Amarnath Yatra would be targeted. A multi-tier security grid was put in place. Security forces succeeded in ensuring that the yatris stayed safe from the point they entered the state till their return. However, the passengers of one bus did not follow the standard operating procedure. After the successful completion of the yatra, the pilgrims are learnt to have gone to Srinagar on a sightseeing tour.

So not only did the terrorists target pilgrims they also targeted tourists. Seven dead, 19 injured. Is Kashmir unsafe for tourists? Should tourists not venture out of their hotels post 7 pm?

There is a standard operating procedure in place. Security forces deploy in the morning. There are road opening parties that stay on the road from dawn to dusk. The yatra convoy is flanked by armed security personnel. The convoy reached its base at 4.30 pm. The road opening party withdrew for the day at 7.30 pm. Why was a bus permitted to ply post 7.30 pm? Why did the J&K Police not stop them at any checkpoint? That is a lapse on the part of the security forces. 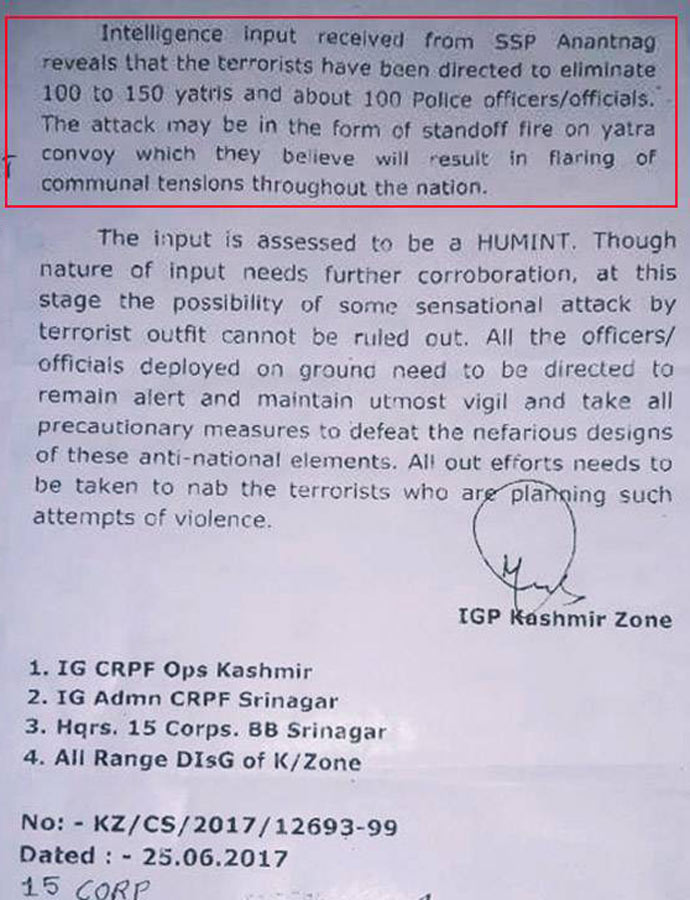 There were intelligence inputs from June 26, 2017, that the Amarnath Yatra would be targeted.

The terrorists, it now transpires, launched a well-planned and coordinated attack. They hit a police checkpoint, then the bus carrying the Amarnath yatris and then a camp of the security forces that could have responded immediately to the terror attack. The terrorists then fled.

The Army and the security forces have mounted a massive counter-terror operation. The aim is to neutralise Ismail, the LeT terrorist who led the terror strike in response to the killing of LeT terrorist Bashir Lashkari.

Terrorists are increasingly under pressure to launch high profile attacks to remain in the headlines. There is an ecosystem that provides intellectual cover fire to terrorists and stone-pelters. Some have tried to justify the terror attacks in the name of the so-called freedom struggle and some others have tried to justify stone-pelting in the name of legitimate protest.

The security forces believe the controversies over pellet guns to deter stone-pelting and Major Leetul Gogoi’s actions of tying an alleged stone-pelter to the bonnet of a jeep to protect Election Commission officials was to put them on the backfoot. But with two actions, Army Chief General Bipin Rawat has set the new template.

Stone-pelters will be considered overground workers of terror organisations and be dealt with accordingly. Secondly, pinning a commendation badge on Major Gogoi’s chest sent out a signal – the chief is holding the hand of officers on the ground combating Pakistan-sponsored terror.

Stone-pelting, though reduced, has not stopped. Several terrorists have escaped due to the cover provided by the stone-pelters. But security forces insist the rules of the game have changed. The country in particular and the world at large (barring the state sponsor of terror Pakistan) have realised there is no freedom struggle in Kashmir. It is a radical Islamist terror ideology that India is fighting. The lynching of Kashmir’s Muslim police officer Mohammed Ayub Pandit and the killing of Amarnath yatris have proved it.

The Narendra Modi government at the Centre wants to be seen as tough on terror. This is the time to defeat Pakistan-sponsored radical religious terror in the Valley. It is now or never.

#Human Shield, #Kashmir conflict, #Amarnath Terror Attack
The views and opinions expressed in this article are those of the authors and do not necessarily reflect the official policy or position of DailyO.in or the India Today Group. The writers are solely responsible for any claims arising out of the contents of this article.