Rahul hai to mushkil hai! It’s time for Congress to get rid of dynastic politics

The Shah-Modi hit jodi have made voters aware that they are better off without political parties that are run like a family business.

Clinching power now looks like a distant dream for the age-old Indian political party, Congress. With BJP wresting its vote share over 50%, the Gandhi clan may need to rethink their strategy for the future. If the Congress needs to make a mark and regain its past glory, to my mind, they need to drop Rahul Gandhi and allow the natural progression of leadership.

Voters are now aware of such dynastic father-and-son political 'companies'. Congress needs overhauling to get rid of the nepotistic traditions — or they will spoil their chances in election year 2024 as well.

After losing to Modi, Rahul called the Lok Sabha elections 2019 a fight of ideology. And he was right.

Parties have now learnt to have an organised, structured, corporatised approach rather than behave like a family business, as seen when Rahul’s very personal Chowkidaar Chor Hai campaign fell flat. The entire structure of the Congress party needs to move to raise new leaders now, who can make the right noises both genuinely and strategically.

Politics is now also an intensely performance-based industry as proven by the involvement of social media in the electoral campaigning process. The Gandhi clan must shun the Congress's dynastic ideology if they want the party to regain past political glory. (Photo: PTI)

On the other hand, Narendra Modi seems to have understood this new approach well. Coming from a poor background, raised in a difficult financial environment, he has used his upbringing to further the aam aadmi narrative of a self-made man. Naturally, people love this story.

Not just dramatic stories though, he has proven his merit as a capable statesman with a record of running a state (Gujarat) for two terms on his own merit.

So, the slogan 'Modi hai to mumkin hai' holds the key to this election.

This political jodi did not campaign against the Congress dynasty — but made their voters aware of the difference between a party with a clear mission vis-à-vis a party defined and run like a family business.

This is probably the first time in 70 years that the Congress raj has been continuously hit by this agenda — first in 2014, and now, in 2019. 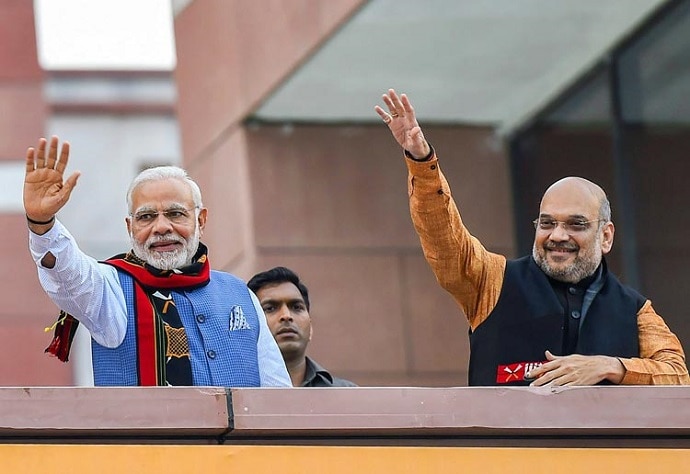 Narendra Modi-Amit Shah turned out to be the dream-team for BJP. (Photo: PTI)

This is probably why political progenies such as Jyotiraditya Scindia, KCR's daughter Kavitha, Ashok Gehlot's son Vaibhav Gehlot and Mehbooba Mufti got a big thumbs-down from voters.

At the same time, the candidates who have worked hard and proven their worth by leading their parties in an efficient organisational structure, such as Jaganmohan Reddy and Naveen Patnaik, have emerged victorious.

So, it’s very clear to voters that their representatives need to be evaluated on the basis of their merit — not political lineage.

Congress is not the only one

The Samajwadi Party, the PDP, NC, NCP, TRS, YSR Congress, RLD and DMK are all examples of family politics.

Just like everything else, Indian politics also needed a big shake-up so many years after Independence. The sooner the dynasty-based parties realise that politics can never become a family business, the better for their survival — politics is a performance-linked sector where netas need to prove their worth, or get voted out.

Post your comment
#Lok Sabha 2019, #Lok sabha election results, #Dynasty politics, #Congress
The views and opinions expressed in this article are those of the authors and do not necessarily reflect the official policy or position of DailyO.in or the India Today Group. The writers are solely responsible for any claims arising out of the contents of this article.