Andhra Pradesh Results 2019: With a thumping mandate, Jagan Reddy walks his way to the CM's chair

Despite facing attacks from the Congress and other opponents, Jagan constantly played the credibility card, reminding the electorate of his legendary late father. It was a storm Chandrababu Naidu couldn’t weather.

With 150 of the 175 seats in the Andhra Pradesh Assembly to his party’s credit, Yeduguri Sandinti Jaganmohan Reddy is all set to take oath as the Chief Minister on May 30, 2019.

He has achieved a terrific triumph in the Andhra Pradesh Assembly elections and has swept 21 of the 25 Lok Sabha seats — setting out to be one of the key players in the Centre as well.

This has been a huge and humiliating defeat for his family's bête noire — N Chandrababu Naidu.

As far as Naidu is concerned, the incumbent Chief Minister has earned the dubious distinction of being unseated from power through the popular vote at the hands of both father (the late YSR Reddy) and son (Jagan).

Jagan’s year-and-a-half padayatra that stretched close to 3,500 Km across 13 districts of Andhra Pradesh has seen him through his victory. The YSR Congress Party (YSRCP) president repeated the political feat à la his father — a man who was the darling of the masses and arguably, one of the most popular chief ministers of undivided Andhra.

Somewhere between 1999 and 2004, a case was registered against YS Jagan against allegedly planting a suitcase bomb during Chandrababu Naidu’s regime in Anantapur district in undivided Andhra Pradesh. An infuriated YS Rajasekhara Reddy, the leader of the opposition at that time, stood on the floor of the Assembly and dared the government to institute a CBI probe into the charge, declaring that Jagan could be hanged if found guilty.

That is the first ever occasion when Jagan’s name came to be discussed in the public domain. 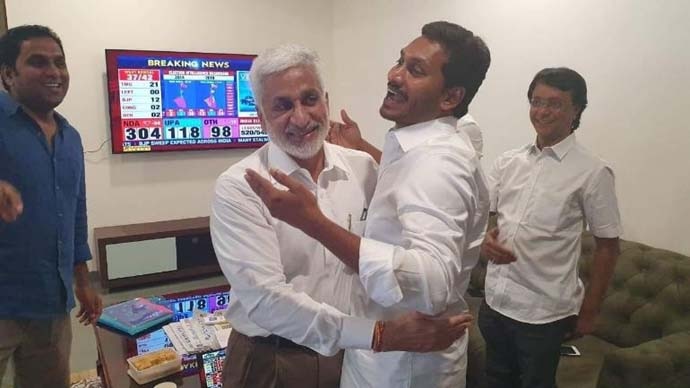 A jubilant Jagan is seen with Vijay Sai Reddy, his confidant and family loyalist. (Photo: Twitter)

After YSR trounced the TDP at the hustings in 2004, he began nursing ambitions to launch his own media house to counter the existing ones that were apparently blowing the TDP’s trumpet for obvious reasons. Jagan shouldered the onus — he launched Sakshi Media, and in the process, reportedly rubbed the media Mogul Ramoji Rao and other media houses the wrong way. Ramoji Rao and the other media houses had apparently been solidly rallying behind the TDP.

Jagan, since then, began nursing political ambitions that led him to enter the Lok Sabha in the 2009 General Elections from the Kadapa Lok Sabha seat as a Congress MP. Though this desire was realised, as ill-luck would have it, Dr YS Rajasekhara Reddy died in a helicopter crash in September 2009. Subsequently, Jagan apparently nursed chief ministerial ambitions and sought to pool support from Congress MLAs and MPs for his cause.

However, the Congress high command was adamant and refused to yield to Jagan’s cause — it instead appointed K Rosaiah as the Chief Minister. Jagan did not take this open humiliation too kindly. He launched his Odarpu Yatra (a condolence tour to console the families of those who committed suicide/died on hearing the news of the demise of Dr Rajasekhara Reddy).

Much to the chagrin of the Congress leadership, the yatra evoked an overwhelming response from the people.

The heroic welcome Jagan received everywhere became an eyesore to the Congress leaders. The party high command convinced, cajoled and arm-twisted YSR loyalists and delinked them from Jagan. The leadership felt that the Jagan wave that was washing over the state had to be wiped off before it threatened to overwhelm the grand old party.

Jagan marched out of the Congress, along with his mother YS Vijayamma, who was elected unanimously as an MLA from Pulivendula Assembly seat after YSR’s death.

Ever since, Jagan has constantly been reportedly witch-hunted and insulted by the Congress and sections of a TDP-supported media.

However, Jagan’s naysayers bit the dust when he walked to his present victory by strategic planning, hard work and a principled fight, despite the hardships he faced.

To quote one example of his battle, Jagan made the 30 MLAs, who walked out of the Congress to support him, resign from their positions as MLAs and seek re-election. This was to ensure that ethically, no one pointed a finger at the YSRCP that the fledgeling party was being supported by MLAs who had won on a Congress ticket in the first place.

The witch-hunt intensified during the by-elections in 2012 when a CBI probe was instituted by the AP High Court, following a complaint by Congress MLA P Shankar Rao. Jagan was incarcerated for 16 months — every time he had applied for bail, it was denied to him.

Jagan’s party, meanwhile, triumphed in the by-elections with his party winning 15 of the 18 seats. This laid a strong foundation for his political future.

However, despite his preparation and groundwork, the BJP-TDP alliance proved to be his undoing in 2014. Jagan couldn’t really catch up on that race, thanks to the alliance that rode the wave of Modi’s popularity.

An unfazed Jagan took the public’s verdict in his stride and started his groundwork right then for the 2019 elections. 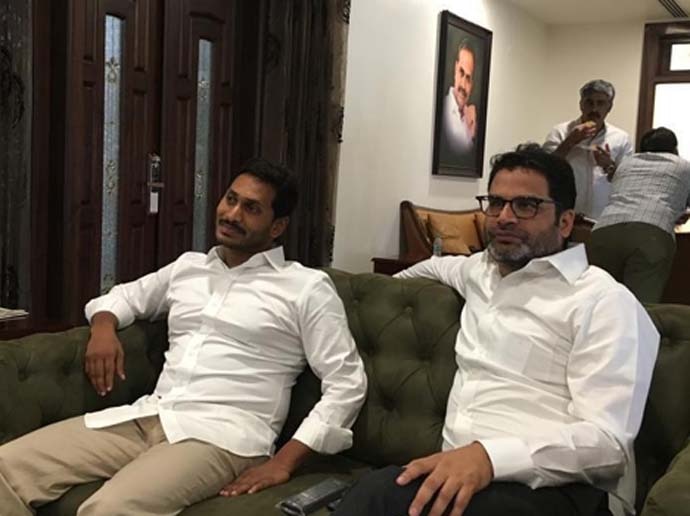 Astute foresight ensured that he roped in ace poll strategist Prashant Kishor to plan his party’s campaign for his party. Jagan did not spare any effort in portraying himself as the champion of public’s causes.

People always patronise those who lead from the front and Jagan was organising and spearheading agitations for causes that mattered to the people. He pulled out all the stops to capitalise on this opportunity.

To give an example, as a warrior of the Special Category Status for his state, Jagan stood firm in his demand. This won him the popularity of the masses when they compared him to his rival — Chandrababu Naidu — who has been oscillating in his demand. Jagan even said that the YSR Congress will back any party — BJP or Congress — as long as it grants the special category to AP. This, despite the insults heaped on him by the Congress since 2009. The masses were thrilled that YSR’s son was holding up their cause — above his grudge. His unwavering stand on the issue further earned him brownie points as a leader with a plan, rather than a rebel without a cause — a title that was bestowed on him by the Congress after his father’s death and his resignation from the party.

Further, as he concluded the longest walkathon undertaken by any Indian political leader — a ‘padayatra’ of 3,648 km — earlier this year, Jagan was already addressing the key issues that have been roiling young voters in the state. The issues included the TDP’s reported failure to implement the farm loan waivers (which Chandrababu Naidu had promised ahead of the 2014 elections), pending Development of Women and Children in Rural Areas (DWCRA) loans and housing schemes.

Jagan assured transparency in administration to be accessible to people. This struck a chord with the electorate that was fed up with the murky brand of TDP’s politics, including the party’s failure to provide convincing utilisation certificates for grants issued by the Centre.

After he launched his padayatra, Jagan announced “Navarathna” schemes — this instilled a sense of confidence in his favour among the people.

He then dissected and impaled the foibles of the Chandrababu Naidu regime. 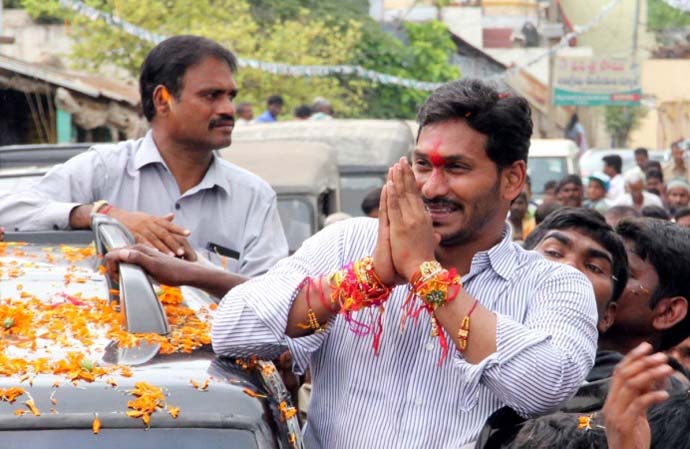 Clearly, the people of Andhra Pradesh trust their Jagan 'Anna' (elder brother). Will Jagan hold up their trust? (Photo: IANS)

Further, Jagan systematically neutralised the vilification campaign launched to defame him and his party members. His detractors attacked him on every possible angle, including his religious faith, his family businesses, even the number of rooms in his residence at Lotus Pond. Jagan worked to nullify these notions in the public memory, and ensured that all that remained was his promise for a better future for the state and its people.

Jagan constantly played the credibility card like his late father.

It was a storm Chandrababu Naidu couldn’t weather.

Jagan now stands at the brink of his first term as the Chief Minister of Andhra Pradesh.

As he takes oath next week, he becomes the face of a new brand of politics for the Telugu region.

It now is up to him to prove that he is indeed a worthy candidate for the mandate that the people of Andhra Pradesh have bestowed on him.

Post your comment
#Andhra pradesh assembly elections, #Lok sabha election results, #YSR Congress, #Jaganmohan Reddy
The views and opinions expressed in this article are those of the authors and do not necessarily reflect the official policy or position of DailyO.in or the India Today Group. The writers are solely responsible for any claims arising out of the contents of this article.