How 'arrogancy’ was added to J&K budget

Hopefully, in 2017, we will debate the coming fiscal, not National Conference’s history.

The minister for finance Haseeb Drabu, also the minister of culture, didn’t recite a single Urdu couplet, not even a joke or even try to engage the Assembly members when he was bombarding the House with figures and information about what he is going to do this fiscal. 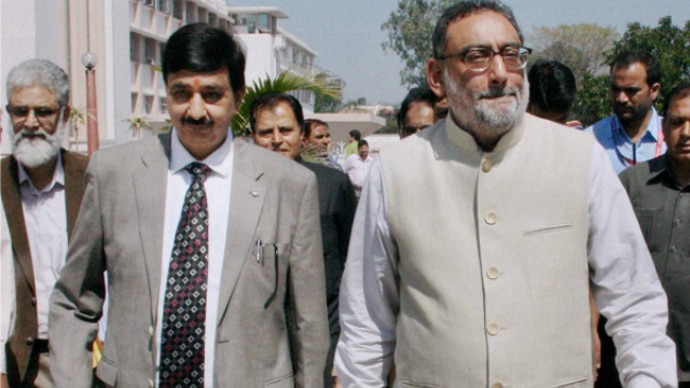 J&K finance minister Haseeb Drabu (right) before presenting ahead of the budget session.

Perhaps, he thought J&K legislators are like Kerala sports minister EP Jayarajan - who, upon the death of the legendary boxing champion Muhammad Ali, said Ali had, in his heydays, "won gold medals and made Kerala famous in the world of sports".

For some legislators thought the finance minister thinks of they are like Jayarajan and accused Drabu of “arrogancy”.

“Finance minister ki arrogancy achi baat nahi hai,” said Ali Mohammad Sagar, a senior member of the NC. Taking a cue, a BJP MLA from Nowshera too joined the “arrogancy” debate. During the debate on grants, he accused the entire government of “arrogancy”.

Of this, capital expenditure would be Rs 19,694 crore and revenue expenditure is pegged at Rs 44, 975 crore, the finance minister said. This is how his predecessor Abdul Rahim Rather would explain the expenditure figures. For revenue, he would explain in Urdu: “Revenue Expenditure ka matlab hai Sarkar chalnay ka kharcha”. And the legislators would nod in affirmative, feeling part of the budget speech. Nothing that sort was found in Drabu address. Drabu says, “What these large numbers mean is that we are spending Rs 2.50 in order to be able to spend Rs 1.00 on development.”

He admitted that reducing the ratio is the big challenge.

Except their odd discourse on the budget speech of the finance minister, the opposition's National Conference, Congress and CPI(M)’s lone member Mohammad Yousuf Taragami beat around the bush. The opposition’s whole thrust was on “arrogancy”.

The Congress member termed the budget had nothing to show - that is Congress-style critique. The opposition has failed to come up with any robust critique of the budget. The state is not doing well in any respect. Last year, the finance minister called off the privatisation of Lakhanpur check-post stating the state government will handover the toll-post to a private firm for one-year to increase the efficiency of the system and free up the resources of the department. He talked the about Ladli scheme.

Both the announcements got good press and no progress was made on either front. No one is concerned what the FM said in the last budget. People forget it like they forget every other piece of news, expect waiver on bank loans. The world is slowing down economically and we have the luxury of never being in the economic race. Whether the world slows down or it peaks, doesn’t matter to us. It passes by us and we watch it to pass by. That is our life and that is our economics.

A simple walk in the market would clear the position with everyone complaining that “there is no market, there is no business.” The class that is flourishing in the state are babus and the land brokers. The land prices are going up so much so that it is difficult to think about buying a land in Srinagar and then constructing a house on it.

You can dream of a house on the moon but not Srinagar. When everything else is going down, no one explains you why the land prices are going up. Not even finance minister.

In J&K, the government is all about providing jobs to political workers and their relatives. That is why even J&K Assembly is not without scam. It is here were successive governments have recruited people on recommendations of politicians. That is it.

Most of the opposition members didn’t raise economic issues while responding to the budget speech. They didn’t even ask why there is no robust manufacturing sector in Jammu and Kashmir. However, the members a had clear vision of the future. The treasury benches started their speech by describing the finance minister as a great visionary and economist and the opposition members ended with the charge of arrogancy.

Incidentally, when one of the opposition members raised the issue, asking what happened to the budget promises made in 2015, the finance minister did what Arun Jaitley does to the Congress when they accuse the government of derailing the economy.

Jaitley, apart from the global factors including slowdown in demand, holds the UPA responsible for the economic mess. Borrowing the same methodology, the finance minister threatens that he will come up with a whole record of what National Conference did to the state over the years. This frightens the opposition and it, in turn, becomes silent.

Let the National Conference say they are ready to listen what they have done and let the government come up with a white paper on what the NC has done to J&K. This will end the ruckus for good. And next year, we may be debating budget, not NC’s history.

#Jammu and Kashmir, #Haseeb Drabu, #J&K budget
The views and opinions expressed in this article are those of the authors and do not necessarily reflect the official policy or position of DailyO.in or the India Today Group. The writers are solely responsible for any claims arising out of the contents of this article.