Unless they want it to be an annual feature, ‘bhakts’ would benefit from giving the former minister’s analysis a good listen.

These are not what I have written today but in fact, are the first few lines of an article I wrote for The Economic Times last year. We have just witnessed an encore: Another castigating Karan Thapar interview with Shourie and the expected damnation from “Modi Bhakts”. Why even a person like Vijay Chauthwale, in-charge, foreign affairs department of Bharatiya Janata Party, tweeted:

#Arunshourie can now happily surrender himself to 10 Janpath. How much more "bhakti" of Gandhi family needed? https://t.co/TlNjqZQAJ1

So is this becoming another annual feature? Arun Shourie on Karan Thapar's To The Point, India Today.

Even as the government begins selectively disclosing information on how it is celebrating its birthday bash, the former disinvestment minister (and a few other portfolios at different points of time) in the Atal Bihari Vajpayee regime warms up to another interview with the veteran journalist. Like always, the interview will grab headlines, resulting in heat and dust in the social media and requiring commentators like yours truly to write several hundred words for website this and the paper mentioned above.

This annual event will be repeated every year during the Modi tenure till Shourie decides to stop having his annual date with the headlines for opening his mouth or if Thapar chooses to stop plugging Shourie.

It cannot cease for the two other reasons, which could have otherwise termated it: Modi placating Shourie by inducting him in his cabinet (absolutely not possible now because in November the former editor and writer-turned-politico will turn 75). The other way the annual exercise could lose relevance is if Modi stops giving Shourie reasons to be critical.

But is there any likelihood of this? My guess is a categorical “no”.

For the moment let’s accept that Shourie’s is indeed a case of sour grapes. After all, he waited for an entire year before deciding sometime around this time last year that a call from Modi would never come. And so, he opened up to Thapar.

Let us also assume that had Modi in any way offered an olive branch to Shourie over the past year and had it been accepted, (though Shourie now says that there was no way he could have worked with this bunch) this interview wouldn’t have been granted.

Without a doubt, Shourie, was not a consistent critic of Modi because in the run-up to the polls in 2014, he had often spoken as virtual finance minister designate once the victory of the Modi-fied BJP became evident.

But should this have been a reason to dismiss what Shourie spoke of last year? Should we, for the same reasons, not take his current words for what they are and on face value? Should we examine Shourie’s motivation or is it more important to examine if what he has said is true or not? 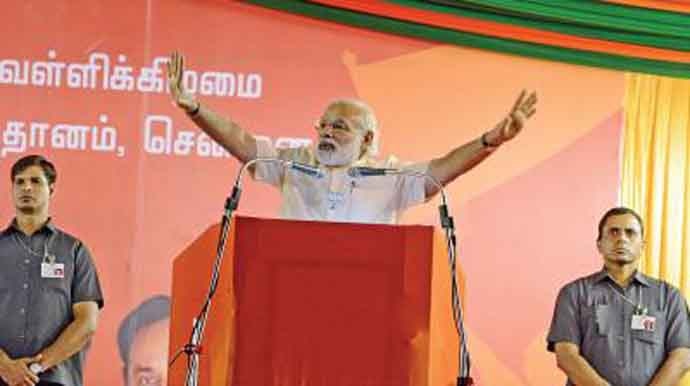 Let’s take a few human failings that Shourie thinks are prominently part of Modi’s persona. “Narcissist” and “Machiavellian” are two labels that he affixes to Modi. Lost in the haze generated by political affronts are the stories of what the words denote.

Narcissus, the character in Greek mythology, was so much in love with himself that he could not tear himself from his own image in a pool. Machiavellianism, one of Modi’s failings according to Shourie, is an extensively used term to denote a negative human trait in unscrupulous politicians that the Italian renaissance scholar Niccolò Machiavelli described in his famous treatise The Prince. The word is used as a pejorative and Shourie’s makes no bones about it.

If anyone has any doubts on whether or not the traits are reflected in Modi, one has to just recall the famous pin-stripes and the manner in which Modi went about finishing one potential rival after another – remember the story about Rajnath Singh’s son?

Let not one ever overlook that Modi does not believe in forgetting and forgiving. And to realise his ambition, he can destroy anything – reputations, careers or relationships. A social climber always, he has, as Shourie said, “used people like paper napkins”.

“Remorselessness” is another word Shourie has used for Modi. He is right in saying that it is difficult to believe how a prime minister could storm inside a medical ward with a camera and TV crew in tow where patients with more than 80 per cent burns were struggling for their lives. And be lauded by Bhakts! For what – acting like the chief medical officer just to earn a few kudos during poll time?

Modi is clearly that man who loves spotlight. Has anyone forgotten the how he pulled Mark Zuckerberg aside because he came between the cameras and Modi? I can go on endlessly on this. But then this article is neither to analyse Shourie’s interview nor a critique of Modi’s two years in office.

The Shourie interviews need to be heard by everyone. I use the word in the plural because very word of what he said last year is still valid. Even if someone does not like Shourie or disagrees with several of his past positions – I for instance disagree with some.

But there is no way one can accuse Shourie of saying anything that is not correct or that he is motivated. Anyone can make out the anguish and the genuineness of his emotions. Like last year, many of the words and arguments which Shourie used had already been written or spoken by several commentators, each of his formulations this year will again echo as appraisals of the government start doing the round.

The Modi brigade will also do itself a service if it listens to Shourie’s words quietly. It will only enable them to introspect and find means of rectification. Otherwise, they better be jolly well prepared for this annual feature.

#NDA, #BJP, #Narendra Modi, #Arun Shourie
The views and opinions expressed in this article are those of the authors and do not necessarily reflect the official policy or position of DailyO.in or the India Today Group. The writers are solely responsible for any claims arising out of the contents of this article.