Do bright minds lack the courage to shine in the unlit alleys of governance?

The NITI Aayog was Prime Minister Narendra Modi's pet transformational project, and Arvind Panagariya as vice-chairman was hand-picked to steer the transformation. Panagariya's exit coincides with the moment in Modi government's tenure when the Centre is in the middle of economic policy changes.

In short, this is not the best time for such a high-profile exit. Top sources say the government wasn't caught napping. Two months ago, Panagariya met PM Modi and told him that he may not be able to continue beyond August.

Last week, he had two meetings with the principal secretary to PMO, Nripendra Mishra, and held his ground. The logic that the government is offering is that Panagariya has his personal reasons. He was "loaned" to the government by the School of International and Public Affairs, Columbia University. Sources say Panagariya said he quit as the university some time ago informed him that it is not in a position to extend his leaves and he wanted to return to the world of academics.

But his love for academics at this juncture raises eyebrows. After all, Panagariya knew what he was signing up for when he said yes to take up the job of vice-chairman at the government think tank, NITI Aayog, a post that has Cabinet minister rank as per warrant of precedence. (However, the pay and allowances of the vice-chairman has been fixed at the cabinet secretary's level.) His was one of the most coveted posts in the government, and the invite for the job came from no less than the prime minister himself. 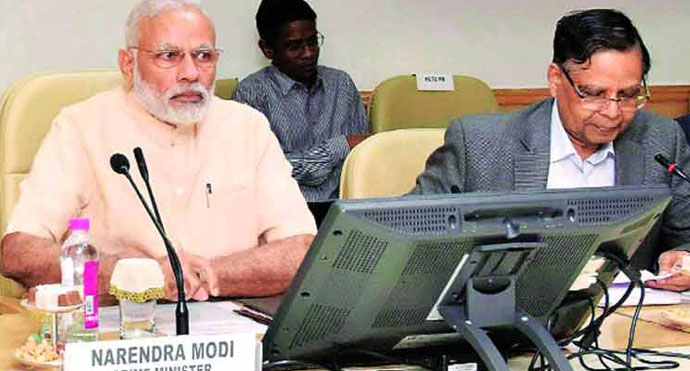 According to sources, Panagariya met PM Modi two months ago and told him that he may not be able to continue beyond August. (Credit: PTI photo)

Government sources say the Centre has a successor in mind to replace Panagariya, and it would be announced shortly - well before Panagariya says his goodbyes on August 31.

Interestingly, the tenure of the chief economic advisor (CEA) to the government - another economist - Arvind Subramanian will come to an end in September. Just in case the CEA, a usually cheerful man who is always excited over something new he reads (a voracious reader) and is far from the humdrum of politics that resides in or around the North Block office of the finance ministry, decides to answer a now familiar "call from academics", the government would be facing a tough choice of finding a suitable replacement.

After all, the two Arvinds - Panagariya and Subramanian - were inducted to fill an "intellect deficit" after the PM Modi-led BJP came to power. The deficit was out in the open when the government was searching for Raghuram Rajan's successor in the RBI. Panagariya's name was in consideration, but he refused to take up the offer.

Panagariya will be the first "Modi man" to make an exit since the regime change in 2014, and the slow weeding out of men in crucial positions inherited from the UPA rule.

Over the past two-and-a-half years, there have been no visible public disagreements between Panagariya and the government. There were no statements nudging the government towards any kind of corrective move on any policy measure. He disagreed with economists and opposition parties to back the demonetisation exercise. He even junked the criticism that PM Modi unleashed two back-to-back disruptive tectonics - note ban and GST. He defended note ban by saying that the growth figures post-demonetisation allayed the fears of economic slump.

Some sources in the high-profile think tank say that the one factor which could have pushed Panagariya to opt out could be his growing discontent with the manner in which the bureaucracy worked or moved despite the prime minister's attempts to declutter the "sarkari style" of functioning.

Sources say Panagariya, an academic at heart, had expressed his disappointment at different fora over the resistance from the babudom to accept or cultivate change. He had even complained about the entrenched conduct of the bureaucracy when suggestions were made.

His exit to return to academics sounds similar to that of Raghuram Rajan. An opinion silently shared among economic minds is that it's difficult for a "pure economist" to survive the politically volatile world of economic and monetary planning even if there is a favourable boss.

Like Rajan, Panagariya too was in the firing line of political outfits, including the aggressive Swadeshi Jagran Manch (SJM), affiliated to the RSS. The SJM publicly challenged the NITI Aayog on a range of issues. Branded as an outfit driven by men with foreign philosophy, the NITI Aayog was accused of being diametrically opposite to the ideological roots of the ruling BJP.

A shrill campaign against Panagariya started last year. In January, the SJM organised a seminar, invited men from the NITI Aayog and used the platform to attack its work. The seminar was held at a time when the NITI Aayog was formulating a position in favour of genetically modified crops - something the SJM opposes vehemently. The SJM clearly indicated that the think tank led by men like Panagariya and Amitabh Kant needed serious course-correction.

The second flashpoint came in May over pricing of essential medicines and the formation of the Committee for Ensuring Enhanced Accessibility of Drugs to the Poor.

SJM’s national co-convenor Ashwani Mahajan fired a letter to the PM claiming that the NITI Aayog was hand in gloves with officials in the Department of Industrial Policy and Promotion, Ministry of Health, Department of Pharmaceuticals when it came to drug-price control. Mahajan managed to incite passions in the Sangh Parivar by claiming that government departments and the NITI Aayog were working against the PM's vision to bring down prices of essential drugs primarily to help private pharma companies.

Social media platforms such as Twitter were used to flag the SJM's concerns on the out-of-sync working of the NITI Aayog. But beyond this spin, a closer scrutiny of the NITI Aayog's two-and-a-half years does provide some more answers why Panagariya chose to leave on a suitable "displease none" note.

NITI Aayog's two-and-a-half years have been anything but transformational. For transforming the "struck by indecision, corruption and ad hocism" economy, the Aayog needed two ingredients - suggesting avenues for course-correction and constructive criticism of government's economic agenda grown in political farm houses.

No one can deny that the NITI Aayog with new framework minus old regime favourites did some credible work. In education, social sector spending, digitalisation of the economy and agriculture. But that's where the good work ends.

The NITI Aayog was built as a replacement of the Nehruvian Planning Commission with huge hype as a thought reservoir to offer fresh ideas to end the reign of archaic policy practices and moribund methods of implementing them.

But the NITI Aayog, which was high on promises, was low on powers compared with the Planning Commission it replaced - a fact the opposition had underlined at the time of its creation. For example, the now-defunct Planning Commission, had powers to allocate funds and to make states follow its policies. The NITI Aayog is relatively toothless. It has powers to recommend, but the power to allocate funds is with the finance ministry and the drive comes from the PMO.

The Planning Commission chiefs in the past were men with economic background and political connections. They had the reach to demand turf control and had politically astute broad shoulders to withstand adversity.

Even during the past few months, instead of driving change, Panagariya was delivering solutions to crisis situations like Air India disinvestment - something which is less transformational and more transitional.

Panagariya was a pure economist. Delighted by economics, disappointed by the landmines of Indian economic policy planning. For someone who has a "life is elsewhere" approach to a government job, the motivated criticism, the lack of space to think and deliver was a bit too much to handle.

Panagariya will soon return to a familiar turf. He can ignore what former finance minister P Chidambaram tweeted after the announcement of his resignation.

After predicting that growth in Q4 of 2017-18 will touch 8%, Mr Panagariya has wisely resigned before proved wrong.

Panagariya may or may not end up on the right side of the prediction, but his stay at the top of the coveted plan body will also be remembered for one failure - to discover a firm voice to guide and correct the government and, in the process, getting guided by the government and its ideas. Something that proves yet again that bright minds lack the courage to shine in the unlit alleys of governance.

Also read: Arvind Panagariya is exactly what Modi wants in an RBI governor

#Modi, #BJP, #Economics, #Arvind Panagariya
The views and opinions expressed in this article are those of the authors and do not necessarily reflect the official policy or position of DailyO.in or the India Today Group. The writers are solely responsible for any claims arising out of the contents of this article.