When an akhada or assembly of Hindu monks appoints someone mahamandaleshwar or the great godman, the aam aadmi does not take notice. When it happens ahead of a Kumbh fair, held every 12 years, other monks raise a hue and cry. It’s part jealousy, part wonder at how people with dubious distinctions dominate divinity, while the ascetics are made to carry their palanquins. When Swami Sachidananda Giri was appointed the mahamandaleshwar ahead of the Nashik Kumbh, questions were raised about his days in the saffron robe. Barely two years into monkhood, Sachidananada is accused of buying the throne for himself. This Land Rover-riding pub owner and builder from Noida was till then known as Sachin Dutta. He says he used to drink like a fish. Now his ascent to the chief ascetic rank has the akhadas astounded. Last time, it was Radhe Maa, who has been banned from Nashik this time.

What makes a baba more attractive and babadom more lucrative than real estate and dance bars? And how do babas, who renounce all family and worldly possessions, end up with empires full of worldly possessions? The answer is marketing and not everyone has the skills to nail that. First of all, a baba must have a USP, the unique selling proposition. A look at the USPs of four popular babas and that one maa. He is quite the filmi hero to his followers. He sings, dances, and does these in costumes. In fact, one costume resembling the attire of a Sikh Guru got him in big trouble. He teachings are simple, mostly because he is not that well-read. When he found some time from body-building, the Chhora Babbar Sher ka (lion cub) read up on religions. His girth stands witness to the fact that he has given up on body-building. He mixes well-meaning verses from different faiths and creates a cocktail that works likes magic on his disciples. He despises casteism. To rid people of casteism, he rids followers of their surname. He gives them a unique surname: Insan. That’s a noble thought. He acted in a movie, MSG: Messenger of God, which his followers ensured was a runaway hit at the box office. He makes regular appearances on TV and in a CBI court in Ambala, where he is tried in criminal cases ranging from rape to murder.

*Ram Rahim now stands convicted of rape and is set to serve 10 years' in prison. He recommends yummy street food as the cure for perplexingly complex life issues. His congregations (samagam) are like wedding receptions, except there is no bride in sight. He sits on the stage, groom-like. In a hall generally packed with devotees who have paid for tickets, people stand up one by one in three different sessions. The first session is where devotees rise and shower him with praise. Everybody is given two microphones tied together with transparent adhesive tape, and four bouncers hold them from leaping towards the resident deity. In the second session, people just talk about their divine experiences in Nirmal Darbar, and Nirmal Baba shakes his hand as if he’s patting an imaginary horse. The third is where they put up their problems, ranging from daughter’s unfulfilled desire for marriage to son’s unemployment to serious heart and brain problems. His advice generally begins with food items or objects one may have seen. He rounds it off with an imperative visit to a shrine closest to the seeker’s place of residence. That’s the moment the devotee is supposed to shed tears and bouncers are supposed to stay unmoved. This Patiala businessman tried his hands at selling cloth, owning a brick-kiln and mine-contracting in Jharkhand because his brother-in-law, a prominent Jharkhand politician, wanted him to succeed. After failing at everything, he tried his hands at blessing people with pakodas, and today he owns a lot of property, including a bunch of boutique hotels. This horse-cart-driver began his spiritual journey as a storyteller and is one of the biggest stories of crime and intrigue today. In jail for raping a minor, his ashrams are notorious for land grabbing and mysterious deaths. His style of delivering mythological discourses involves a lot of singing and dancing. And he would shower petals with a mechanised device on his followers, who would go home believing they are bathed in divinity. He counted many politicians among his followers, but politicians, being politicians, abandoned him when he went to jail. Subramanian Swamy still stands by him and for him, but he ain’t no follower. The followers who became witnesses against him are dying one by one.

Also read: Sex and the yogi 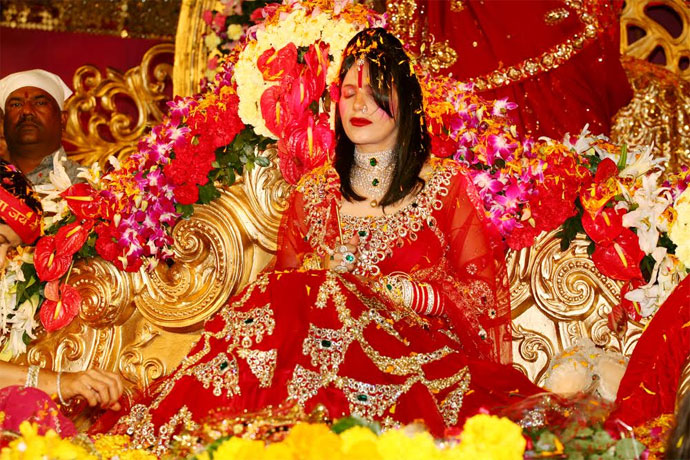 It is better to stay silent and look like a fool than speak and remove all doubt. Radhe Maa doesn’t speak a word even as the 50-year-old fools around in garish make-up and gaudy dresses. She carries a trident and often sports a crescent on her bouffant. She sits like a dumb doll on the stage one moment, and frolics with her fans the next. She jumps into the arms of unsuspecting devotees as if she is a baby. Chhoti Maa, who is much older than her, speaks on her behalf and says very little. To meet her, one needs to meet Talli Baba first. Born in Punjab’s Gurdaspur district, she was married off early to a sweetmeat seller. His business floundered and she began stitching clothes for a living, and found solace in a dera in Mukerian. Her guru Mahant Ramdeen of Paramhans Bagh Dera declared her divine at the age of 23. But it was Mumbai businessman Manmohan Gupta, who owns an outdoor advertising agency, who introduced her to the world as Radhe Maa. His company’s hoardings, when not occupied by advertising, advertises Radhe Maa. She lives on the first floor of his Borivali home. Her congregations or chowkis are like festivals, where people shower her presence with flower petals and she showers people with love in a world devoid of it. She is now charged with a dowry case. Manmohan Gupta’s daughter-in-law has filed a case against the Guptas and Radhe Maa, accusing them of harassing her for dowry.

USP: Gold. What else?

Born in a Punjabi Kakkar family in East Delhi’s Gandhinagar, Bittu Bhagat went to Haridwar and aimed to be a sadhu. He came back and erected a temple in his locality and began blessing people in exchange of affection, and, of course, donation for his ashram. He realised gold is rare and beautiful, apart from being valuable. He wanted his followers to become like gold, and also give him their gold. He wears about 10kg of that. Greedy income tax sleuths have apparently tried to find the source of all that glitter, but then, devotee donations are tax-free. “This is god’s gold, not mine. I know what the tax officials are trying to do, but I hope that by being close to me they will eventually be brought into god’s way and give up their greed.”

And gold, yeah! He came to fame when he visited the Kumbh Mela covered in gold and flanked by white women disciples. He, himself, goes to other senior babas for blessings and loves being photographed. Above all, he is a glittering, fun-loving chap in a Bentley.

#Radhe maa, #Nirmal baba, #Asaram Bapu
The views and opinions expressed in this article are those of the authors and do not necessarily reflect the official policy or position of DailyO.in or the India Today Group. The writers are solely responsible for any claims arising out of the contents of this article.